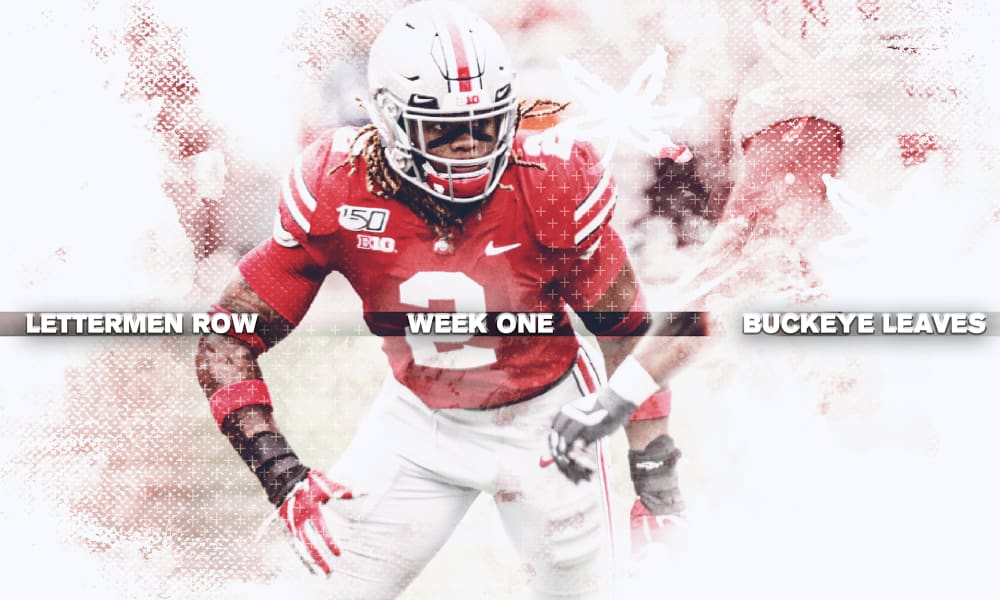 Young has already been named to various All-America lists before the Buckeyes played for the first time. The junior took the first step to becoming the latest Ohio State defensive end to earn national honors Saturday in Ohio Stadium.

He wasted no time in doing so, too. Young chipped in 1.5 sacks among his five overall stops — in the first half. Young and the Ohio State defense held Florida Atlantic to negative-14 yards in the first half and smothered the Owls 45-21.

“It felt really good,” Young said. “Just wait and see what we got coming this year.”

While the Ohio State offense started hot and cooled off in the second quarter, Young and the Silver Bullets were just getting started. With Jonathon Cooper out due to an ankle injury, Jashon Cornell was forced to move to defensive end opposite of Young. Cornell was impressive, as well, coming up with a sack that Young would have cleaned up if Cornell wasn’t there.

But that’s how effective the Ohio State defensive line can be with a healthy Young. He registered more than 10 sacks last season despite playing on two ankles that weren’t 100 percent. So far this season, he appears to be healthy and ready to make a run at the single-season Ohio State sack record.

And the Buckeyes defense seems to be just getting started.

“We got up pretty early, and we just wanted to stay pretty simple,” co-defensive coordinator Jeff Hafley said. “We felt like with [three linebackers and a simple plan], we could win the game. We didn’t want to get into too many things today.” 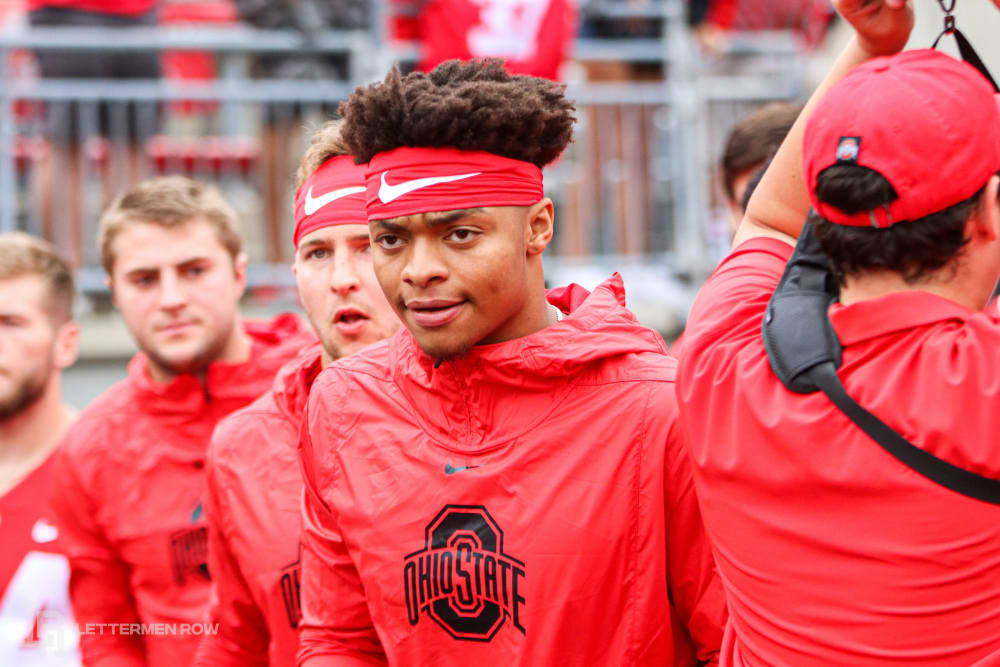 It’ll hard to find a better quarter of football than what Justin Fields did in the first quarter Saturday. In his first nine plays as the starting quarterback, the Buckeyes scored three touchdowns. He ran one in from 51 yards, then had a pair of touchdown passes to Jeremy Ruckert and Binjimen Victor. Fields finished the game completing 18 of his 25 passes for 234 yards and four touchdown passes and added 61 yards rushing and a score. After the first nine minutes of the game, Fields and the offense fizzled and didn’t score again until late in the third quarter, and the Buckeyes struggled to put drives together. But if the first half was any indication of Fields’ potential, Ohio State has gotten the quarterback they signed up for. 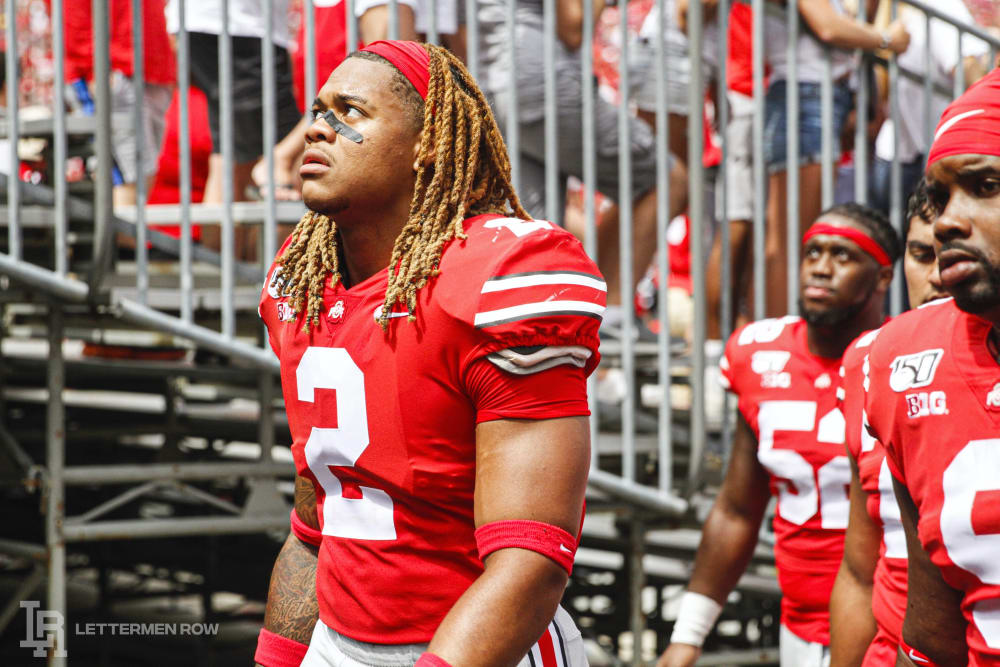 Ohio State defensive end Chase Young was stellar in the opener for the Buckeyes. (Birm/Lettermen Row)

If Saturday is any indication of what’s to come, Chase Young will be living in opposing Big Ten backfields this fall. When Young wasn’t directly impacting the game, he was still making the Owls offense think about him, allowing his fellow Rushmen make plays. Young ended with 1.5 of the Buckeyes four sacks, but he could’ve easily mopped up two more sacks that he was poised to make alongside other teammates. Young was everywhere, proving his position as one of the country’s best defensive players. 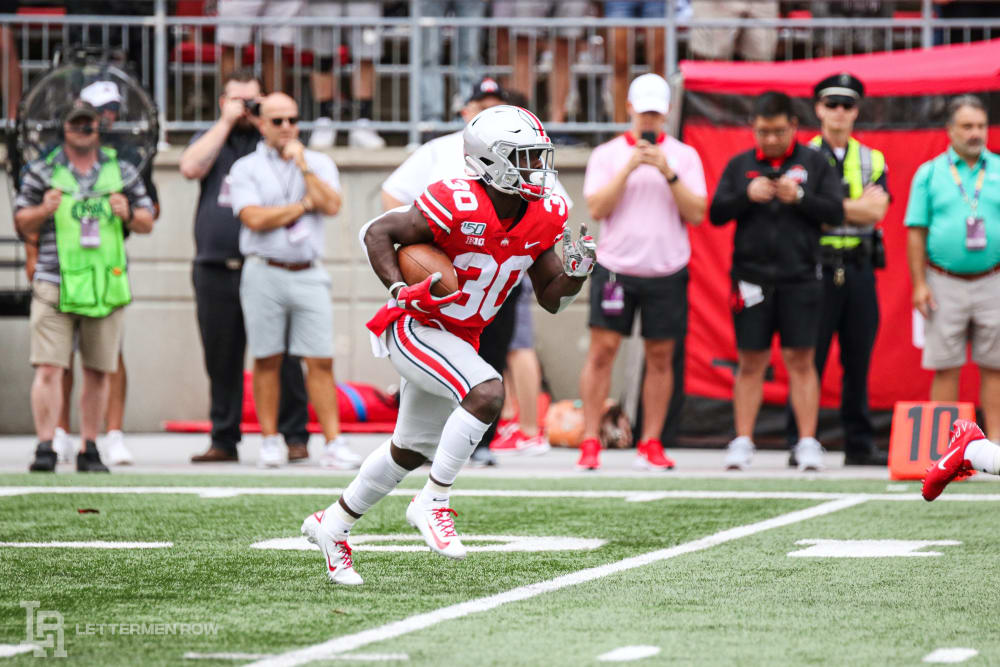 Demario McCall has to find a role somewhere on the field for Ohio State, and Saturday may have been the first step on his way to a prominent one on special teams. McCall ended the season opener with 110 total yards: 11 rushing, seven receiving, 52 on kick returns and 40 on punt returns. He had an opportunity to return a punt for a touchdown in the first quarter, but even after he was tackled, the Buckeyes were in business for another touchdown drive. Maybe it was just a one-game thing. Or maybe McCall just carved out a huge role on special teams.

Ohio State shows both championship potential, room for growth
What We Learned about Ohio State in season-opening tuneup
Advertisement