COLUMBUS — The emergence of Chase Young at Ohio State has arrived, right on schedule.

Now the Buckeyes just have to make sure they can keep the blossoming star on the field when it really matters.

Late in a blowout of an overmatched opponent obviously isn’t exactly a time where the defensive line would be calling on the sophomore all that much, so in some respects Young’s fourth-quarter ejection last week against Rutgers wasn’t that big of a deal. His work was already done after tallying a pair of sacks, keeping offensive lines honest as they try to block the loaded Rushmen package and helping set the tone in a dominant defensive outing collectively for Ohio State.

But picking up a second unsportsmanlike conduct penalty and being escorted to the locker room is still never a good thing, and it did serve as a reminder for the sophomore of the importance of keeping the emotions in check — whether the calls were debatable or not.

“I don’t want to make too big of a deal of it to be honest,” defensive coordinator Greg Schiano said. “I think just you need to control yourself so you don’t get a penalty. Like I said after the game, if it were a tight ballgame, a penalty or losing a player of that magnitude could really hurt us.

“But I love the excitement that he plays with, the passion that he plays with. Just got to kind of harness it just a little bit. My thing to the defense is: I want us to play with that edge. You know, I think playing great defense, part of it is having an edge. So we’ve just got to be careful we don’t overdo it in tempering it.” 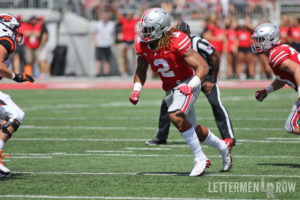 The Buckeyes clearly don’t want to sacrifice much of that energy considering what it’s producing in Young, who is already looking like a potential first-round draft pick in 2020 after Nick Bosa is gone. Ohio State is obviously enjoying having both of them around at the moment, with the edge-rushing tandem combining for five sacks through two games despite seeing relatively limited workloads in the blowout victories.

The snap counts figure to go up for both this week in a top-15 matchup against TCU, and Ohio State was clearly relieved to have Young’s availability for the entire game confirmed by the Big Ten on Saturday evening.

What makes Chase Young so dangerous and invaluable to the Buckeyes at this point in his career? Former Ohio State linebacker Zach Boren stepped into the Lettermen Row film lab again to evaluate the defensive end’s game and weigh in on the importance of both playing with and managing emotions.