Connect with us
Troy Smith breaks down the play of Justin Fields. (Bruce Thorson/USA Today Sports)

COLUMBUS — The Justin Fields highlight reel is already getting bloated at Ohio State.

The Heisman Trophy buzz is getting louder with every gorgeous deep ball for a touchdown or dazzling rush for a score on the ground.

And the record-breaking pace is hard to ignore when measured up against his friend and predecessor at quarterback for the Buckeyes, especially since he’s still ahead of Dwayne Haskins now that the sample size is getting big enough to really matter.

But the first thing Fields is hearing when he comes to the sideline for Ohio State is still praise when he throws the football away, incompletions that don’t necessarily win individual awards but keep the team in line to chase the biggest trophy of them all. And that’s exactly the kind of feedback he wants from Ryan Day, and he’s not tired of it at all.

“No, not really,” Fields said with a smile. “I mean, with the good passes I do throw, it just has to become a routine. I really just can’t get praise off of that. I really like getting praise off of the throwaways, because that’s the stuff that I’m really not used to doing. In high school, I really didn’t throw it away, I would just try to run and get extra yards. I think throwing the ball away has made me a better quarterback in terms of decision making, so I’m happy when he says that. 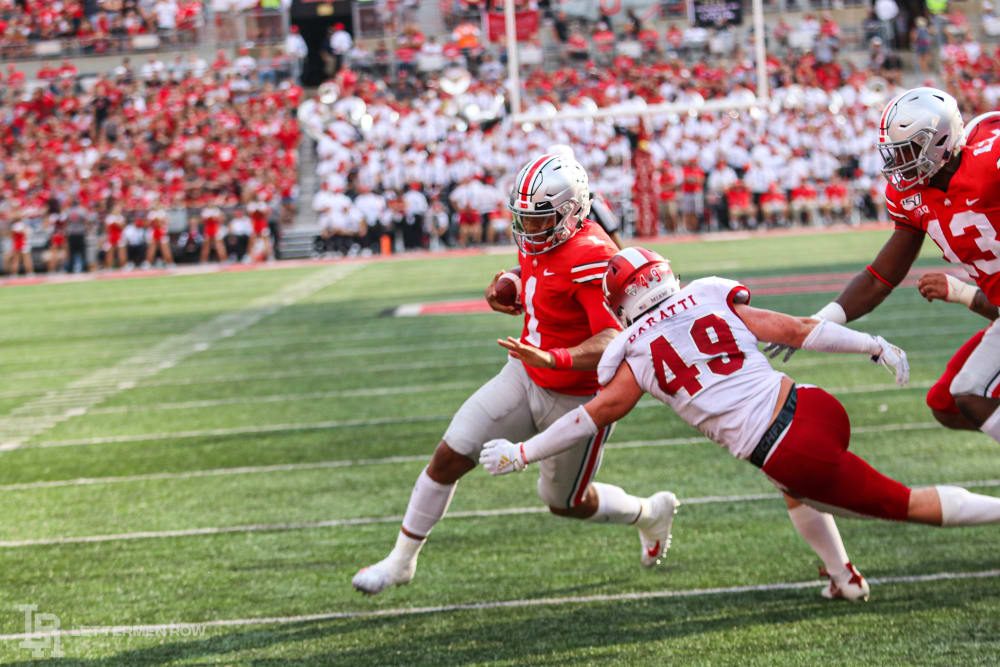 Ohio State quarterback Justin Fields is off to an incredible start with the Buckeyes. (Birm/Lettermen Row)

“I really expect to make those [good] throws. It’s about having a high expectation for yourself. I expect more from myself, so even if I don’t reach those expectations, I could still be elite.”

There’s no question that Fields is putting himself in top-shelf company as one of the most productive quarterbacks in the country nearing the midway point of the regular season. And his 23 touchdowns accounted for currently have him three ahead of where Haskins was through five starts a year ago. Even better for the Buckeyes? Fields hasn’t thrown an interception yet, compared to two at this stage for the eventual Heisman finalist and first-round pick.

What has allowed Justin Fields to get off to such a remarkable start for Ohio State? How realistic are his chances of making a Heisman Trophy push in his first season as a starter? What part of his game most impresses another Buckeyes quarterback who won the stiff-arm statue? Former Ohio State star Troy Smith was back in the Lettermen Row film lab breaking down what he has seen so far and giving a glimpse at how his ballot for the Heisman might be taking shape.