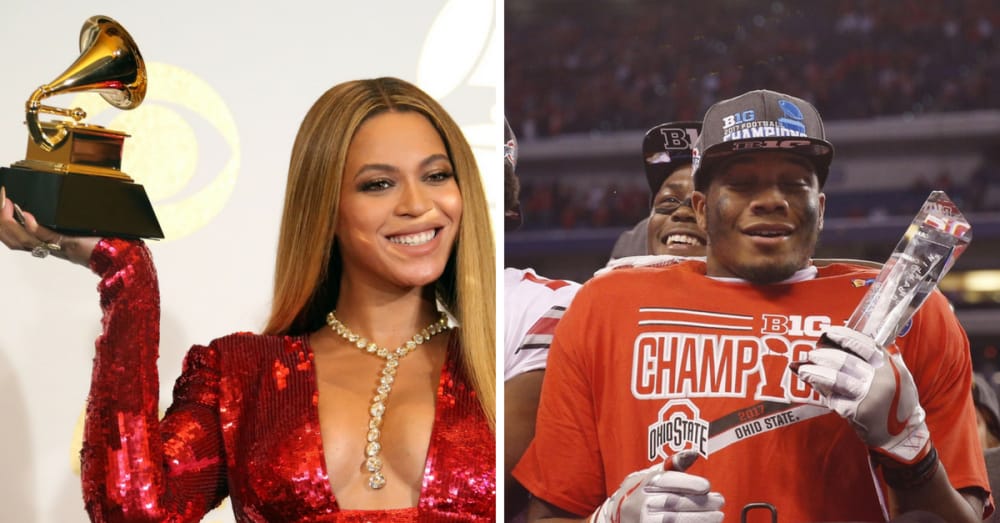 Award-winners Beyoncé and J.K. Dobbins have both called the Horseshoe their stage. (Dan MacMedan and Brian Spurlock/USA TODAY)

COLUMBUS — The Horseshoe was built for history to be made inside it. So, the venerable stadium is obviously no stranger to epic showcases, and now Beyoncé and Jay-Z are taking their turn to step out under the lights and borrow the stage that belongs to Ohio State.

Of course, much like Taylor Swift last month, there appear to be some not-so-hidden messages that the power couple might just be singing and rapping with the Buckeyes on their minds. Neither Queen Bey nor HOVA have ever come right out and declared their college football fandom to the reigning royalty of the Big Ten, but the connections are there for anybody that really wants to find them before the OTR II starts tonight at Ohio Stadium.

So, like usual when Ohio Stadium welcomes so high-profile guests/fans, Lettermen Row is digging through the song catalog to find some of the references that might have been missed on the first or hundredth listen to some of the most popular tracks in America. Can the links be definitively proven right now? Certainly not. Do they exist? Only the Illuminati might really know. Will there again by a senior writer on this staff brave enough to infiltrate the field-level seats in the search of information (and to celebrate his wife’s birthday)? Hell yes there is.

The Countdown is on. 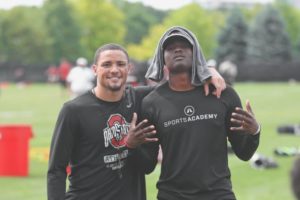 Austin Mack and Dwayne Haskins already have a Beyoncé song to celebrate their partnership. (Birm/Lettermen Row)

7/11: The buzz about the potential jackpot that is a Dwayne Haskins-Austin Mack partnership has been building for quite some time, and the time has finally arrived for the guys in those two numbers. Maybe Beyoncé jumped the gun a bit by releasing this banger four years ago, but even back then the possibilities of Haskins putting in the air when Mack put his hands seemed tantalizing. As always, the trendsetter just made sure the intro music was ready when 7-11 was ready to officially open for full-time business at Ohio State after that splashy debut in The Game.

Formation: Even with Beyoncé establishing what would seem to be more SEC-style credentials at times in this empowering anthem, there are some clues sprinkled in that make it clear the power-spread playbook at Ohio State would be her preference. There’s no question that the Queen goes hard to get what she wants, and both her and the Buckeyes love nothing more than running up the score and enjoying the spoils of victory. Few teams can match the firepower of that Ohio State offense, which also happened to be on display one time in New Orleans on the way to a national title. 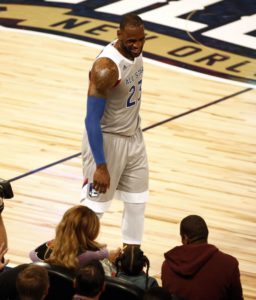 Upgrade U: The recruiting sales pitch is right there in the title, and I’m sure director of player personnel Mark Pantoni appreciates the help. For players looking to get to the next level and have everything they ever dreamed of, Ohio State has become perhaps the top development program in the country when it comes to molding talent and preparing it for the NFL draft. The finer things in life obviously aren’t the only motivating factors for the Buckeyes given everything else the program has to potentially offer down the line, but then again, they also aren’t making it a secret there’s a pipeline to the next level in Columbus that might lead to some chances to hang with Yoncé or have Jay-Z as an agent.

Run This Town: The uptempo beat and confident message the Jigga Man delivered with some help from Rihanna and Kanye West helped put this song in arenas and locker rooms all over the country, and Ohio State was no exception. But the Carter family is well aware that few programs can back up that talk better than the Buckeyes, whether that town is Ann Arbor or Indianapolis or Dallas. The trophies and bragging rights have a tendency to return to Columbus, and Jay-Z will no doubt pledge his allegiance now that he’s back again.

Get Me Bodied: The dance moves don’t directly correlate to the defensive schemes, at least to the untrained eye. But the Queen makes it clear that she enjoys the physical contact that can only come from a hard-hitting defense, and the Silver Bullets are positioned to do it better than anybody in the country this season. Turning Nick Bosa and Chase Young loose on the edges with Dre’Mont Jones in between as the Rushmen get after the quarterback is, though, one way that a little sweatin’ might actually hurt somebody. 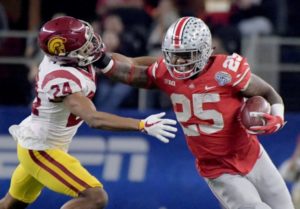 On the Run and Part II (On the Run): Just one ode to the tradition-rich ground game at Ohio State wasn’t enough, so the Carters doubled down with a second duet. Why did they need a second? Because they could, for starters. And because it offered a reminder that sharing the workload allowed both to stay fresh and come back with another hit when other squads simply wouldn’t have the depth to even try. Keep that in mind with J.K. Dobbins and Mike Weber providing enough ammunition for an album full of hits this season now that both are stronger, healthy and ready to share the spotlight.

Family Feud: Nobody knows exactly how or when the Urban Meyer investigation is going to end or if there will be a Carters-style happy ending when the drama concludes for Ohio State. Most public signs seem to suggest that the Buckeyes could have handled the entire Zach Smith situation better, but they also don’t appear to point to a divorce between the program and Meyer if he handled the proper protocol for reporting what he knew in 2015. Nobody is likely to emerge from this fight as a winner, but a definitive outcome in the investigation should allow Ohio State to move forward and potentially prevent any situations like this from happening again. All the cards have to be on the table and the air completely cleared first, or there can be no reunion.

Friend or Foe: There’s too much smoke for there not to be a bonfire blaring between offensive geniuses and former colleagues Urban Meyer and Tom Herman. What’s really the deal down in Texas? These guys used to be such close buddies, now there seems to be new fights being picked every couple months. It’s time to settle the matter for good.

Irreplacable: The title might seem a bit misleading for Beyoncé’s kiss-off message. But make no mistake: This is another Ohio State breakup-ballad classic reserved for Tim Beck.

Do Rushmen at Ohio State have bulletin-board material already?
Tate Martell package would be luxury, not necessity for Ohio State
Advertisement