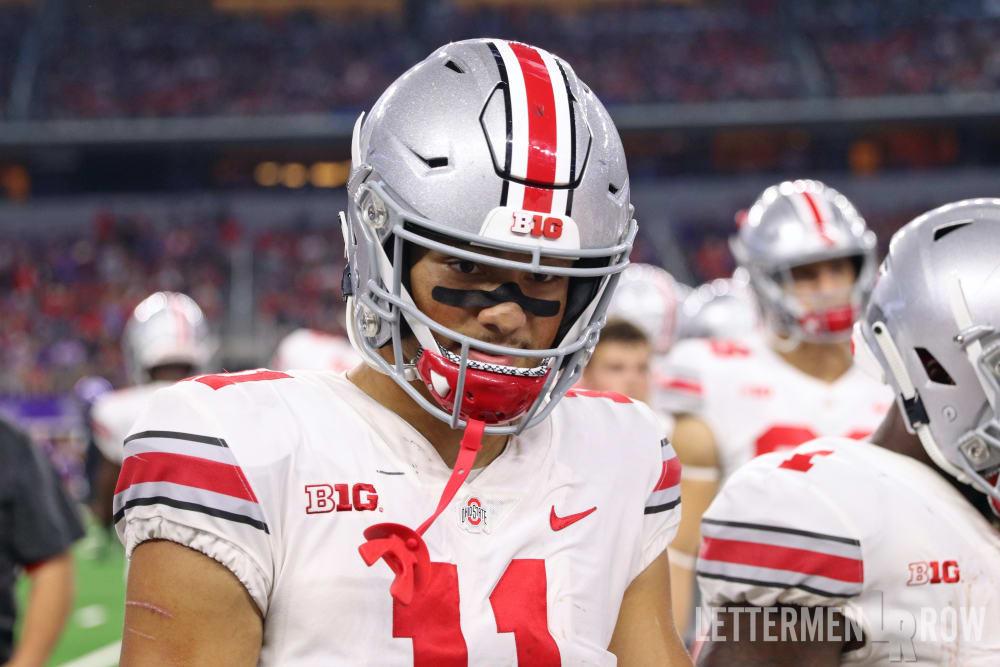 After dealing with an injury and drops last season, Ohio State wide receiver Austin Mack is motivated for 2019. (Birm/Lettermen Row)

COLUMBUS — Tucked back into a corner of the Ohio State locker room on a stool, the mixed emotions were unmistakable for Austin Mack.

The junior wide receiver wanted to celebrate the accomplishments of the Buckeyes after the Rose Bowl victory. But he hadn’t taken part in the game.

Mack was excited about the future. He was also willing to admit how difficult his junior season had been.

And while he was ready for the torch to be passed his way from the three captains about to leave his unit, that also came with the realization that his last chance to play with them had already happened back in October when he broke his foot.

Eventually the bittersweet feelings will surely fade for the rising senior. And when they do, Ohio State is going to have a wideout with plenty to prove after the season where he was expected to emerge as the offense’s best all-around target instead became more notable for key dropped passes and an injury.

“Oh yeah, I mean, dealing with all that is a real big issue,” Mack said. “And I can definitely say there were a couple points when I was at my lowest. If it wasn’t for the guys around me and the support that I have, I wouldn’t be able to get through it. It’s definitely real.

“I mean, it’s been a grind. I’m just really trying to get back healthy, get my mind on the future. That’s the No. 1 thing, I was just trying to be in a supporting role for my guys, do whatever I can to be a good teammate. And that’s always going to continue into next season.” 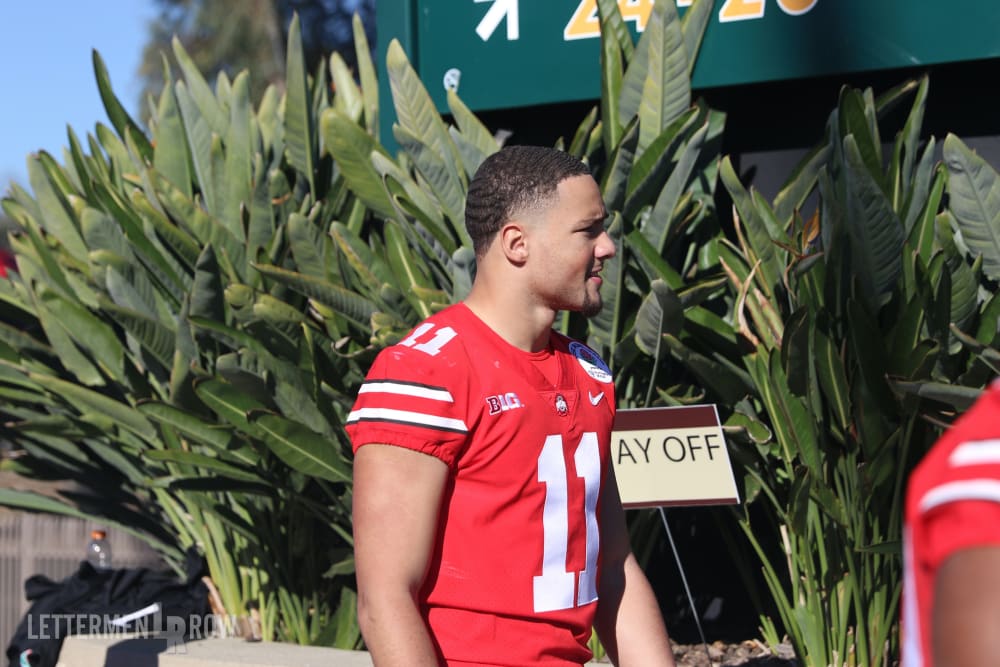 Austin Mack was working his way back to full strength for Ohio State ahead of the Rose Bowl. (Birm/Lettermen Row)

That campaign is already underway as Mack continues to rehab and get back to full strength with another shot to become the playmaker the Buckeyes have expected him to be since the moment he arrived on campus. Ohio State has seen enough glimpses of it to remain fully confident in his ability to be a primary weapon at wide receiver after still grabbing 26 passes for 331 yards and a touchdown before his injury last season. And there has never been any doubt about his maturity, work ethic or ability to be a leader away from the field for a group that again helped redefine the culture for the program overall.

Mack was a part of that last year, of course. But it was captains Terry McLaurin, Parris Campbell and Johnnie Dixon primarily blazing the trail then, and now it’s up to Mack, Binjimen Victor and K.J. Hill to fill that leadership void — and replace all those receptions and touchdowns. And when it comes to that on-field production, all eyes will be on Mack as he shakes off the physical issue and mentally moves on from rough games like the drop-filled nightmare against TCU.

“I think he was OK with all that, but in the end, when the going is easy, it’s easy, right?” wide receiver coach Brian Hartline said. “To me, real leaders, really good players, real men handle adversity well. That’s what separates them, and I think Austin has done a really good job with that.

“I think he’s moved forward, I’m not really concerned about any kind of woes he’s had — I think he’s going to be great. Right now he’s focused on getting healthy and getting ready to attack 2019 with the right mindset.” 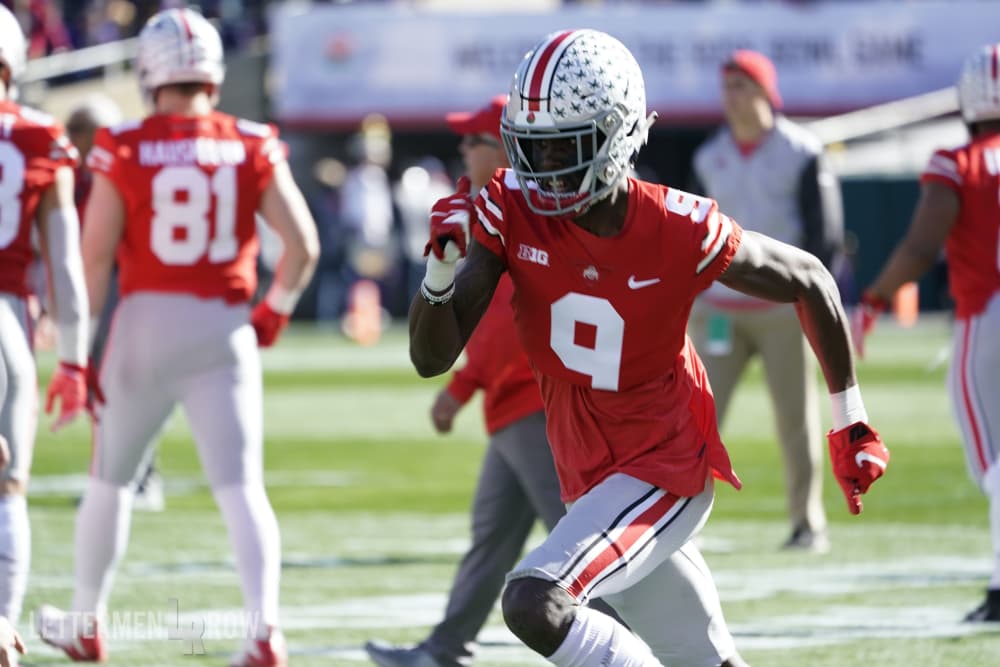 The return of Binjimen Victor for Ohio State will also be a boost alongside Austin Mack. (Birm/Lettermen Row)

That battle is only just beginning as the offseason conditioning program gets rolling, with Mack looking to build on some of the workouts he was doing on the side in the buildup to the Rose Bowl. Like always, there’s no shortage of support around him, even if those seniors won’t be around Mack any longer.

There’s still Hartline. Victor and Hill are around to help set the tone. Chris Olave is emerging into a star, and newcomers Garrett Wilson and Jameson Williams will arrive knowing full well what the standard is for the Buckeyes.

Mack may have been something of a forgotten man as the raucous Rose Bowl party raged around him on New Year’s Day. But soon enough, expect to see him come fighting out of that corner.

“I’m excited,” Mack said. “We’re going to keep this thing going. Those guys left a legacy that we’re going to have to continue to keep going. The greatness in the room is not going to be lowered.

“I think we’re going to really be able to take the next step.”

Austin Mack hit a couple roadblocks. But he’s back on the path and ready to make some less complicated memories for himself now.