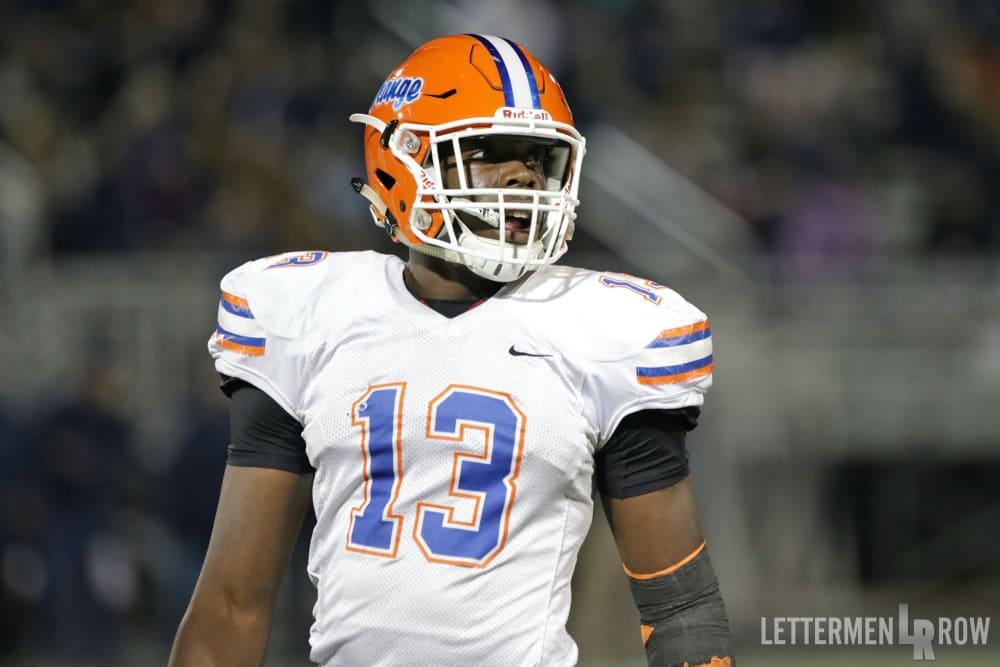 COLUMBUS — Ohio State has received a signed Letter of Intent from 5-star prospect Zach Harrison, bringing an end to one of the more intensely scrutinized recruitments in recent memory.

The defensive end chose the Buckeyes over Michigan and Penn State. Harrison announced his college intentions with his high school journalism class and a live Twitter feed of the otherwise closed to the media event.

A 6-foot-5, 245-pounder from Olentangy Orange (Lewis Center) High School, Harrison’s recruitment began as a sure thing for the Buckeyes but ended after months of speculation, rumor and whispers about the extremely private high school star.

Harrison, the fifth-ranked prospect in the Class of 2019, exploded onto the national recruiting scene at the beginning of his junior season at Orange. His remarkable frame and athletic ability that can clock a 40-yard dash in under 4.55 seconds opened the eyes of college recruiters almost as much as his poker face would frustrate them as his recruitment went on.

Ohio State was the presumptive leader for more than a year, and most assumed it was just a matter of time until the local star would choose the home team. Following official visits to his three final schools in the spring and summer, Harrison intended to announce a college decision in August, prior to the start of his senior season.

When those plans were delayed, it was clear that everything had kind of went haywire in Harrison’s recruitment. He spoke about that in Dallas this summer at Nike’s The Opening, a premier recruiting combine/camp for the country’s most talented players.

“I’m more confused than I’ve ever been,” Harrison said. “I had a great time on both visits. There were good and bad things about both visits.”

As the season dragged on, so did Harrison’s recruitment. One week it was the Buckeyes in front, the next it’d be the Wolverines and the next it’d be Penn State. The decision weighed heavily on the introverted superstar. But thanks to a solid support system, he maintained his privacy and worked his way to a conclusion. When the dust settled, it was Ohio State that won out and defensive line coach Larry Johnson was the primary reason for that.

“Coach J is the best defensive line coach in college football, if not college football history,” Harrison said. “That’s a big thing for him, I’ve got a good relationship with him, he talks to my mom a lot, my family, which is important to me. I like Coach J.”

Harrison is Ohio State’s 15th commitment in the Class of 2019 and the highest-ranked recruit to pick the Buckeyes in this recruiting cycle. He is the third 5-star prospect in the class, joining wide receiver Garrett Wilson and offensive lineman Harry Miller. He becomes the second defensive end to commit to Larry Johnson and third defensive linemen in the class.

Want to know more about Zach Harrison? Check here for everything we’ve written on this future Buckeye and take a closer look at what he’s bringing to Ohio State by digging into his recruit profile on Lettermen Row.