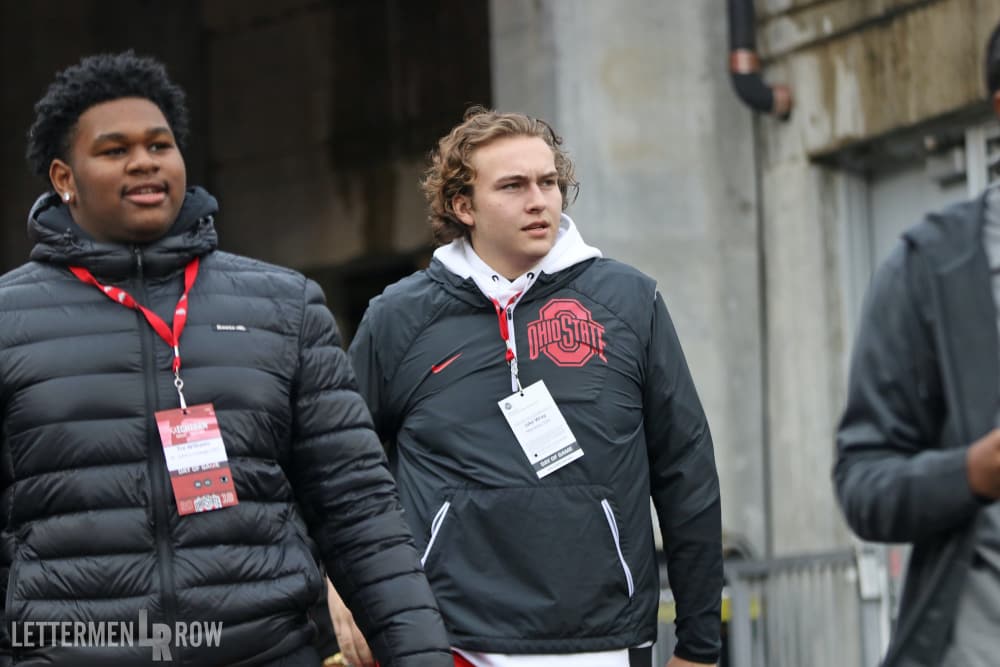 Jake Wray has been a leader for Ohio State's 2020 class but will now reassess his options. (Birm/Lettermen Row)

Jake Wray has decided to decommit from Ohio State.

There is bound to be some fallout for the Buckeyes amid Urban Meyer’s retirement. And for the second time in about 16 hours, a leader of the fast-rising 2020 recruiting class has decided to reopen his recruitment.

Wray, the first commitment for Ohio State’s 2020 class, has been instrumental in helping build what has the potential to be a monster class for Ryan Day. Now with uncertainty around the program, though, he’s going to step back and re-evaluate his options. 4-star cornerback Lejond Cavazos, a close friend of Wray’s and quarterback commit Jack Miller, did the same on Tuesday night.

Ohio State is hoping to secure the rest of its 2020 commitments, but none have been more important than the offensive line group that offered early pledges. The leader of that group was Wray, but Cincinnati 5-star Paris Johnson has stepped into that role, and now much of how that class takes off is contingent on Johnson. He’ll make a visit to Ohio State on Friday to meet with Day as the program looks to stabilize his recruitment.

Both Wray and Cavazos have indicated they will continue to consider Ohio State as an option in the future as they examined other possibilities.

“Committing early had only big loop hole for me,” Wray wrote. “No major coaching changes.”

Losing Urban Meyer is certainly a major coaching change. And there’s no doubt other recruits are looking at their options as well.

After losing Wray and Cavazos, Ohio State’s 2020 class is down to five commitments but remains the top-ranked class in the Big Ten by a wide margin.

Lettermen Row will have more on this decommitment and all the recruiting news around the Buckeyes football program in Wednesday’s edition of Dotting the ‘Eyes.