Connect with us
Tyler Booker plays with a nasty streak but leaves that part of his personality on the field. (Tyler Booker/Twitter)

Ohio State football recruiting can be a wild ride full of twists and turns as recruits from all over the country maneuver their way to signing day. Lettermen Row is here to help navigate the tumultuous roads by getting to the heart of the matter with the young football players and Ohio State coaches and staff members themselves. This week’s guest is Tyler Booker, a nationally-regarded offensive line target being courted by the Buckeyes in the Class of 2022.

Ohio State has  played its cards pretty close to the vest when it comes to offensive line recruiting in the 2022 cycle.

Yes, the Buckeyes have an early commitment from Lakota West 4-star Tegra Tshabola, but in-state prospects who had multiple chances to visit Columbus before Covid-19 shut down the recruiting world last March are all but a slam dunk for Greg Studrawa and Ryan Day.

Where things get considerably more tricky, especially in the last year, is when Ohio State has to recruit out of the state.

That is unfortunately where the majority of the Buckeyes recruits are and the recruiting shutdowns have forced Studrawa, Day et al to slow things down as they try and refill the offensive line at Ohio State. The position is notoriously difficult to evaluate under the best of circumstances and in a time when it’s impossible to get in-person evaluations the task becomes harder and forces a patient, measured approach.

That’s one of the reasons Ohio State didn’t offer Tyler Booker, a standout tackle at the IMG Academy in Florida until last October. His sophomore season for the Ascenders made him a national name but the young two-way lineman was still learning to play on the offensive side of the ball and the Buckeyes wanted to see more. When they saw what they needed to, it was full-speed ahead with an offer and the hopes of an eventual commitment. 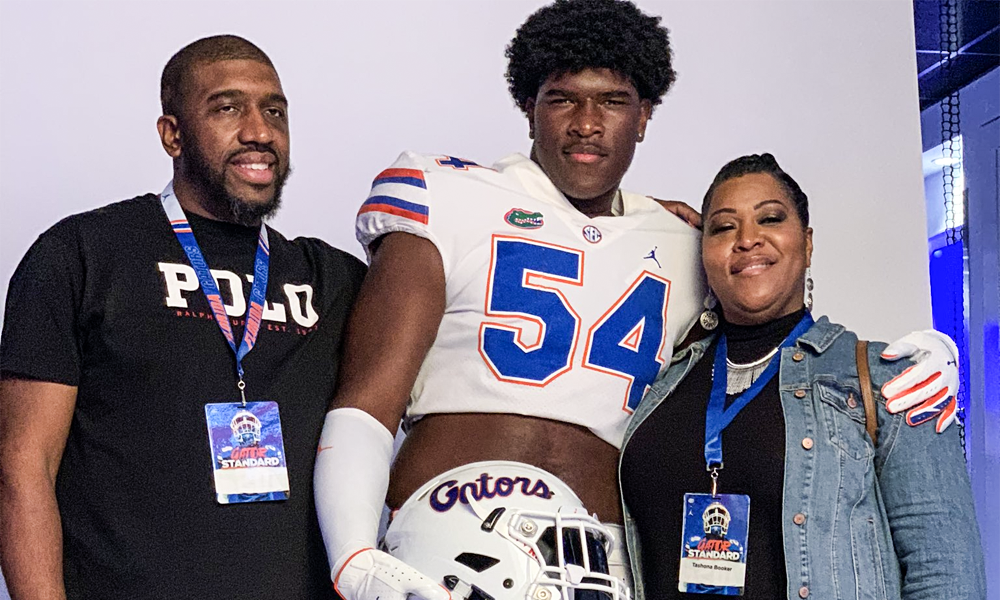 It’s been more than a year since Tyler Booker and other recruits have been able to make college visits. (Tyler Booker/Twitter)

But for Booker, a Connecticut native, things haven’t been able to move at the pace he expected. That’s not stopped him from talking regularly to Ohio State, a program he grew up watching closely because of a family tie to the Big Ten.

Is the connection between Tyler Booker and Ohio State real? What kind of influences do the 6-foot-4, 315-pound lineman have on the field? What is he looking for in a college program and when would he like to make a decision about his future? One of the top 2022 prospects on the Ohio State recruiting board joins Birminology to talk those things and more.

(We apologize for the video aspect of Booker’s interview not working, there was a technical error that caused it to be unavailable.)