Ohio State commitment Tegra Tshabola says his life has changed 'a lot' since committing to the Buckeyes. (Birm/Lettermen Row)

Ohio State football recruiting can be a wild ride full of twists and turns as recruits from all over the country maneuver their way to signing day. Lettermen Row is here to help navigate the tumultuous roads by getting to the heart of the matter with the young football players themselves. Birminology shows who the young men being recruited by Ohio State truly are — by talking to them. This week’s guest is Tegra Tshabola, who committed to the Buckeyes just less than two weeks ago.

Tegra Tshabola may only be 16-years-old, but the chance to fulfill his lifelong dream of playing for Ohio State wasn’t something he was going to risk taking for granted.

That’s why the 6-foot-6, 305-pound offensive lineman from Lakota West (West Chester, Ohio) decided to commit to the Buckeyes 10 days ago despite initially planning to spend this spring away from the recruiting trail.

“My family and I decided to take a step back from going on any more visits so that I can finish the school year strong,” Tshabola told Lettermen Row in early March. “I haven’t talked to [Ohio State] since last month but I’m sure they will understand if I can’t make it, they’re pretty understanding.”

When it comes to understanding, Tshabola — Ohio’s No. 2-ranked 2022 prospect — may be ahead of the curve. Just two weeks after that early March conversation the recruiting world changed quite a bit and the school year was abruptly finished so the offensive lineman did get to make one on-campus visit to Tennessee before everything shut down for good. That visit to Knoxville was important. Tshabola left feeling very good about the Volunteers but also left with a better idea of what he needed from his eventual landing spot and what made Ohio State the right fit for him. 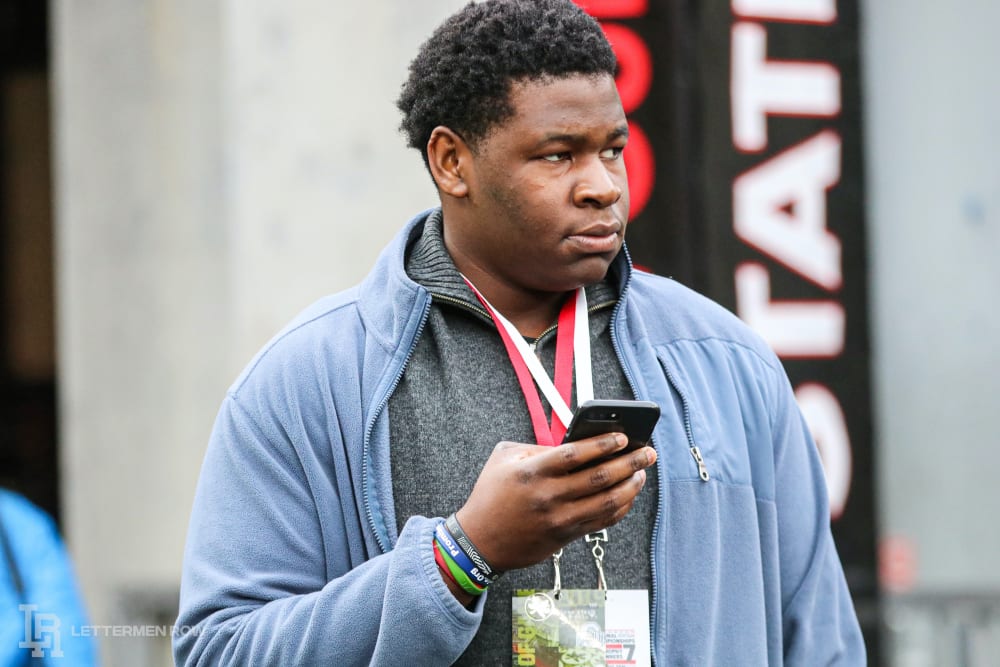 Tegra Tshabola was offered by Ohio State in November of 2019. (Birm/Lettermen Row)

The Buckeyes didn’t need to push Tshabola for a commitment. He knew he wanted to play at Ohio State and had the wherewithal to make a decision before others could, which would have potentially made his spot in the Class of 2022 less secure.

So why not commit and do his part to bring in the best possible recruiting class in the country along with his C.J. Hicks, who committed to the Buckeyes on Friday?

How will Tegra Tshabola approach recruiting his peers? What’s he working on to become a better, more complete football player? What made the biggest difference for him when comparing Ohio State to Tennessee and others?

Tshabola talked about those things and more in the latest edition of Birminology on Lettermen Row.