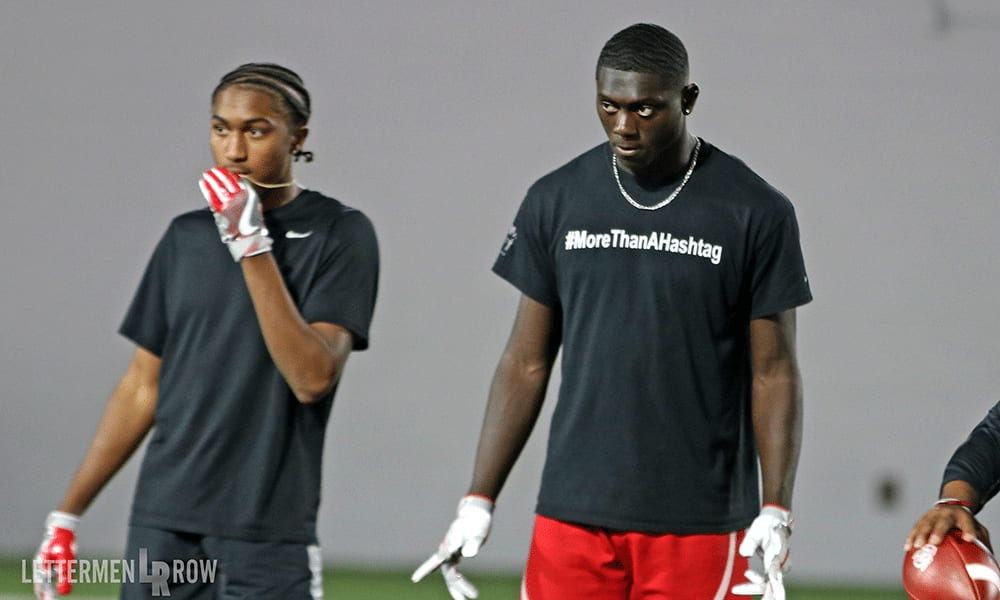 When I arrived at Ohio State on Tuesday morning for the Buckeyes one-day camp, the first person I noticed among the crowd was a big athlete wearing red shorts and a black t-shirt, talking to Urban Meyer, Zach Smith and others.

That was Craig Young, and you could just tell that it could be a big day for the 3-star athlete from Fort Wayne (Ind.) Wayne High School.

First, Young was working with Buckeyes defensive backs coach Alex Grinch. Then, the 6-foot-3, 212-pound prospect was pulled aside by Urban Meyer and – though Meyer’s words couldn’t be heard – the message was clear.

“You may get too big to play defensive back, so why not take some turns with the linebackers?”

Young did just that. Then he worked out with Larry Johnson along the defensive line. Then he went back to covering wide receivers as a safety. To his credit, Young – who ran a 4.49 in the 40-yard dash earlier in the morning – took it all in stride and during a brief break period, told Lettermen Row and a few others gathered that he doesn’t care where he plays in college, though his 247Sports.com profile lists him as a wide receiver.

…and that’s when things got interesting for Young.

All morning, you could see the Buckeyes staff watching him, trying to figure out exactly how he fits into their program and, more specifically, the 2019 class. However that will happen is up in the air, but by the end of the afternoon it was clear that was a problem they’d figure out later.

Young was taken back to meet with Greg Schiano and though he did not commit immediately, says that a decision could be imminent. Ohio State’s staff won points with Young, ranked as Indiana’s 10th-ranked prospect for being upfront with him about their confusion regarding his position, though.

“They just kept it real with me,” Young told the media following camp. “They didn’t sugarcoat anything with me. I’m just weighing all my options. I’ll be talking about my commitment probably in the next few days. Just stay tuned.”

Young also confirmed to Lettermen Row that he will be back at Ohio State on June 22.

Staying in the Class of 2019 and a player that may have shored up his place with Ohio State on Tuesday, the Buckeyes offered Parkersburg (WV) tight end Brenton Strange.

Blessed to receive my 13th offer from the Ohio State University!! @OSUCoachKDub pic.twitter.com/AxL4e0GXhz

“It Always feels good to get an offer,” Strange told Lettermen Row. “It felt really good to get one from Ohio State. [Buckeyes offensive coordinator] Coach [Kevin] Wilson and [Urban] Meyer like the way I play, my quick twitch, explosion, and competitiveness.”

Strange visited Columbus on June 4 and told LR last week that he intended to return so that the Ohio State staff could “see how he moves” and he moved very well. Strange measured in at 6-foot-4 and 210-pounds a week ago and could be the answer to Ohio State’s tight end question in the Class of 2019.

There’s no immediate decision coming here – Strange has added a handful of offers in the last week since visiting Columbus – but the Buckeyes have put themselves as the team to beat.

“Obviously, it’s Ohio State,” Strange said when asked if the offer meant he was considering an early decision. “But I think I will wait out the process still, before school starts, to commit.”

Close but no cigar on 2020 defensive back Lejond Cavazos

The Buckeyes have been at the top of the list – along with Georgia – for 2020 defensive back Lejond Cavazos for a while now and on Tuesday he made his fourth visit to Columbus. this time making the trip with his family, including his mother and sister.

Cavazos, 6-foot-tall and 180-pounds, is a phenomenal athlete and he showed that early and often during Tuesday’s camp. He ran a sub-4.5 for the Buckeyes coaches and during defensive back drills, he was instinctive, natural and explosive. He has great burst and change of direction and the long arms and overall build to be a dynamite cornerback or safety. The IMG (Bradenton, Fla.) star has offers from 21 different schools and it’s easy to see why when you get a chance to watch him in person.

He’s got special athletic talents and – though he’s raw from a football knowledge point-of-view, there’s a ton of upside here. The Buckeyes see that and were hoping to seal the deal in his recruitment but Cavazos told LR that he wanted to make sure planned trips to Georgia and Oregon were followed through with before he makes a college decision.

Right now, the Buckeyes lead according to Cavazos, but the trip to Georgia this coming Thursday does loom large. The Bulldogs don’t have the history with him that the Buckeyes do, but they’ve made him a priority of late and no one is recruiting at the level that Georgia has in the last handful of months.

This is a two-team race right now in my opinion and a decision could come in the next few weeks.