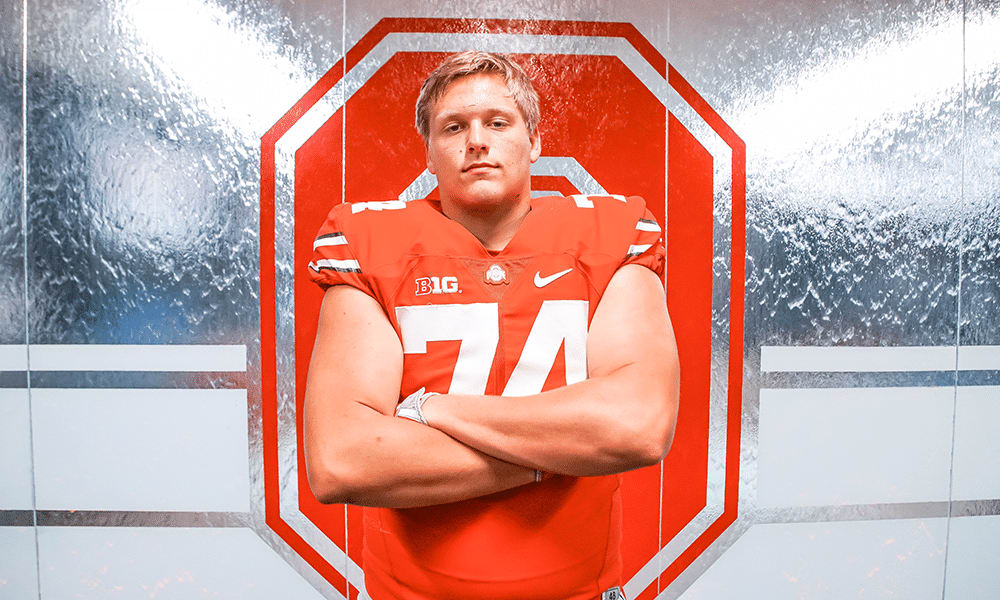 The Buckeyes offered Corcoran at the end of April and on Thursday, the country’s 15th-ranked – but rapidly rising – offensive tackle visited Columbus with his mother.

“It was phenomenal,” Corcoran told Lettermen Row about the visit. “They had everything that I could have imagined and more.”

As a prospect from a non-traditional football state, Corcoran said he just got a different vibe from being at Ohio State than he has at the schools around his home state.

“Real Life Wednesdays, that really stood out to me, that stuck out to me the most,” he said. “Plus, just talking to Urban Meyer quite a bit, he’s a nice guy and down to the earth, [Buckeyes offensive line] Coach [Greg] Studrawa is a great dude and really funny, ad [Director of Player Personnel] Mark Pantoni is a great guy.

“It’’s just a great vibe from them, a great feel.”

That feel is, according to Corcoran, not what he’s felt before.

“When you’re visiting all these other colleges, all the coaches are kind of — the same,” he said. “Urban Meyer has national championships under his belt. That’s different. He knows other people who are going to help get careers kick-started, and that really helps how things are viewed from a “what if I don’t make into the NFL?” standpoint. That was different than anywhere I’ve been. That’s a big deal.”

It’s not easy for a kid from Lawrence, Kansas, to come to Ohio State and feel at home. The campus at Ohio State, the sheer size of it, was eye-opening for Corcoran. However, he knows he has to take a long look at programs like the one the Buckeyes have.

“I heard it was big, but it was big,” he said. “When we first walked in and saw the trophies and everything, the CFP trophies, all their stuff. It’s impressive.

“I’m just trying to open my view a little bit, to see what’s out there a bit. What other programs have to offer. They all have good educations, and football, but what’s going to help me after football? What’s going to happen in real life? What kind of connections am I going to have after that?”

The visit to Ohio State was short, just one day, but Corcoran intends to be back in Columbus this fall, provided his own team’s football schedule allows it.

“We’re going to try and come to a game,” he said of his plans for a follow-up visit to Ohio State. “We’ll see how everything plays out in our playoffs and see what works for us.”

I don’t want to alarm anyone, but I feel that people should be aware of what’s going on.

Paris Johnson, Jr., the country’s No. 1-ranked offensive tackle in the Class of 2020, and an Ohio kid hailing from Cincinnati St. Xavier High School, has had the honey-friend chicken at Florida State. Currently in the midst of what seems to be a month-long recruiting expedition across these United States, the 6-foot-7, 275-pound sophomore was at Florida State earlier this week. He spent Thursday at Georgia and he’s still heading to Clemson for a visit. Oh, he’s made a stop at Alabama, as well.

But one thing has stood out when it comes to eating and you know that a kid 6-foot-7 and 275 pounds is thinking about eating.

“The best thing I’ve eaten on this trip,” Johnson told Lettermen Row. “Is the honey-fried chicken at Florida State.”

For those of you who are unaware, that nefarious deep-friend poultry has impacted Ohio State’s recruiting efforts before. It was cited by 2017 5-star defensive tackle Marvin Wilson as one of the reasons he committed to the Seminoles over Ohio State.

Johnson was unaware of the chicken’s devilish past, but immediately returned with a question of his own?

“What are some famous restaurants in Columbus that I need to check out?” he wondered. “I plan to visit Ohio State sometime this month, we’re just finalizing the date.”

As noted, it’s a pretty crazy for Johnson. Outside of the Southeast swing that he’s currently on, and a stop back home at Ohio State, he’s got a West Coast trip planned for the end of the month. Stanford, USC, UCLA and Cal will all host him on campus.

After these trips, it’s back to focusing on his Bombers’ teammates, according to Johnson.

“It is very exciting (to make all these visits),” he said. “But I am still focused on working with my teammates to become our best selves and compete at the highest level.”

Ohio State offered a new Class of 2020 defensive lineman on Thurdsay and he told Lettermen Row it’s one that he’s been waiting for.

“It’s huge,” Kedrick Bingley-Jones shared moments after posting his offer on social media. “This is one I’ve been hoping to earn for a long time. I’m definitely taking them into consideration. I have payed attention to people like Joey Bosa and other defensive linemen who have came out of there. I know the academics for the school are really huge, and that plays an important role for me.”

The 6-foot-4, 245-pound defensive end/tight end isn’t just offering up lip service, either. The news of today’s offer promptly led to a campus visit being arranged.

“Coach Wilson and Coach Johnson, that’s who I spoke over the phone with,” he said. “I will be up there for a visit on June 22.”

Need more Ohio State recruiting? Check out the Lettermen Row forums and let us know what’s on your mind

Will Taver Johnson and Alex Grinch be able to replace Kerry Coombs on the recruiting trail?
His relationship with Ohio State growing, Toledo’s Riley Keller is ready to put best foot forward during important summer camps