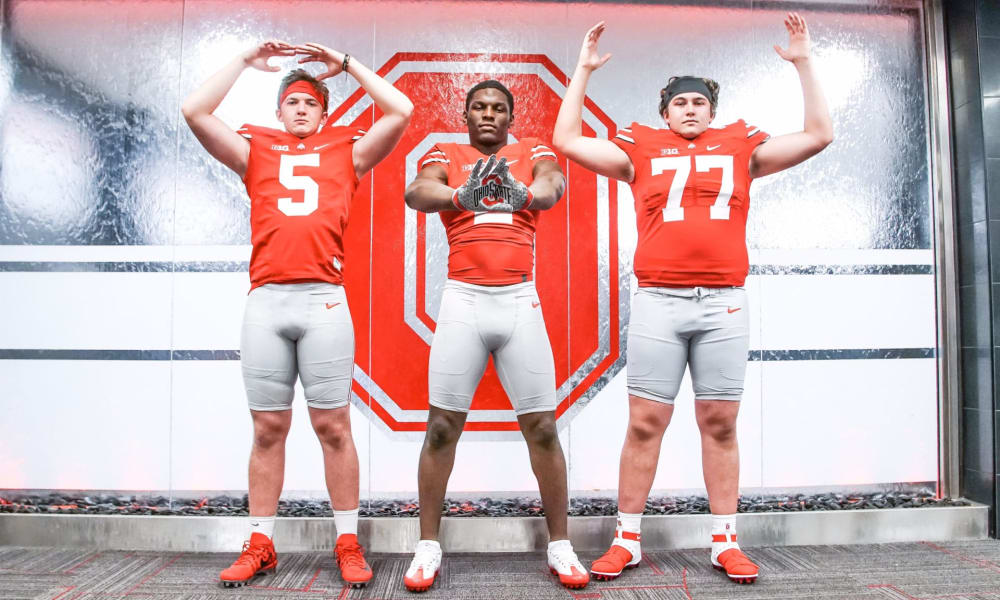 Show me the Wray

There’s no doubt what Jake Wray has in store for the next couple years: Recruit the best guys he can to play alongside him in Columbus.

“I’m just excited to recruit my first guys,” Ohio State’s lone Class of 2020 commitment told Lettermen Row on Monday evening, hours before he arrived in Columbus for a two-day visit. “If I get as many good players I can to look at Ohio State, then the more good players will come and it will just ripple. That will have an impact and create more buzz for us.”

Wray can get back to work now as part of a two-day visit to campus at Ohio State. He’ll use the time to hang out with his brother and get a chance to do some good-old fashioned recruiting of his own. Two of his top-ranked teammates at Marietta (Ga.) High School – where he transferred last fall after spending two seasons at Franklin (Tenn.) – are in town Tuesday with him. Harrison Bailey, the second-ranked pro-style quarterback in the country for 2020, and Arik Gilbert, a 5-star prospect ranked No. 11 overall in that class, made the trip to Columbus after visiting the Michigan Wolverines on Monday.

For Wray, it’s a chance to put testimony to theory, and he’s regularly been talking about the Buckeyes to his teammates. For Bailey, it’s a chance to tighten up some bonds within the Ohio State coaching staff. It’s a second visit, but Ryan Day was not around during his first trip and the chance to spend more time with the Buckeyes offensive coordinator and quarterbacks coach is something he says is vital.

Ohio State is no doubt hoping for the same.

During that time, the 6-foot-tall, 200-pound Hubbard – one of the top running backs at Ohio State’s Friday Night Lights camp last July – will make not one, but two visits to Columbus to check out the Buckeyes.

Football, though, won’t be his only focus as he mixes in downtime with his inner circle alongside his on-field work.

“It’s a two-week trip, but it’s a business trip and a chance to see my family,” he added. “I should also be visiting Michigan, Michigan State and I’m hoping to get down to Tennessee.”

Hubbard is the country’s No. 83-overall prospect in the Class of 2020. He does not yet have an offer from the Buckeyes, but he has recently picked up scholarships from Nebraska, Alabama, Arizona, Georgia, LSU and others.

The Buckeyes went toe-to-toe with Penn State in the 2018 recruiting cycle in their efforts to land 4-star defensive end Jayson Oweh and fell just short. Now, the Ohio State coaching staff is hoping to take the lessons learned in that recruitment and apply to another big-time prospect from the same New Jersey high school.

His name is David “King” Ojabo, and he’s the next big thing at the Blair Academy (Blairstown, N.J.). His story, like Oweh’s, is fascinating in part because of his heritage – his parents still live in Scotland and Ojabo is here in the United States without them – and because of his raw talent thanks to a lack of football experience.

Ojabo has played just one year of football, but he made that one year count. The 6-foot-4, 235-pounder has offers from Michigan, Penn State, Texas A&M, Notre Dame, Clemson and Ole Miss among an early 35 that he’s racked up. Penn State is the favorite, thanks in part to Oweh landing there and the strong relationship Blair Academy coach Jim Saylor has with James Franklin from their days of playing together at East Stroudsburg University.

Over the course of the next two weeks, Ojabo – with his parents visiting – plans to visit as many as eight different college campuses, including Ohio State’s. What day that Columbus visit will happen is not yet determined, according to the 3-star prospect. Why it’s happening, though, is clear. This will probably be the one chance his parents will have to check out the schools and sit down to talk with the coaches at the universities he’s considering.

“I won’t be going there to camp,” Ojabo told Lettermen Row. “I’ll be going with my mom and dad. I don’t know the day yet, my dad is planning that out.”

Justin Rogers and the rope-a-dope

In case you missed it on Monday night, there was a bit of speculation that 4-star offensive guard Justin Rogers was going to end his recruitment and finally commit to Ohio State, the school he’s announced as the leader in his recruitment for months.

Rogers had put a vague message on Twitter on Sunday night, hinting that Tuesday was a day some big news was coming. Earlier this afternoon, he tweeted again.

It was not big news.

Instead, it was Rogers posting his top 13 schools.

OK, so the Buckeyes are still in the mix. That’s not unexpected. What was unexpected though was that both Michigan and Michigan State failed to make the list. That’s surprising because – despite Ohio State being the leader for a while now – Michigan was recently in his Top 3 schools.

As long as Rogers plays this out, there’s going to be room — and time — for the Wolverines to get back in the mix, especially now that offensive line whisperer Ed Warinner is running that unit in Ann Arbor.

Offensive line or wide receiver? What’s Ohio State’s biggest recruiting need in 2019
Class Warfare: With Sampson James and Steele Chambers in the mix, Ohio State could be done at running back in 2019