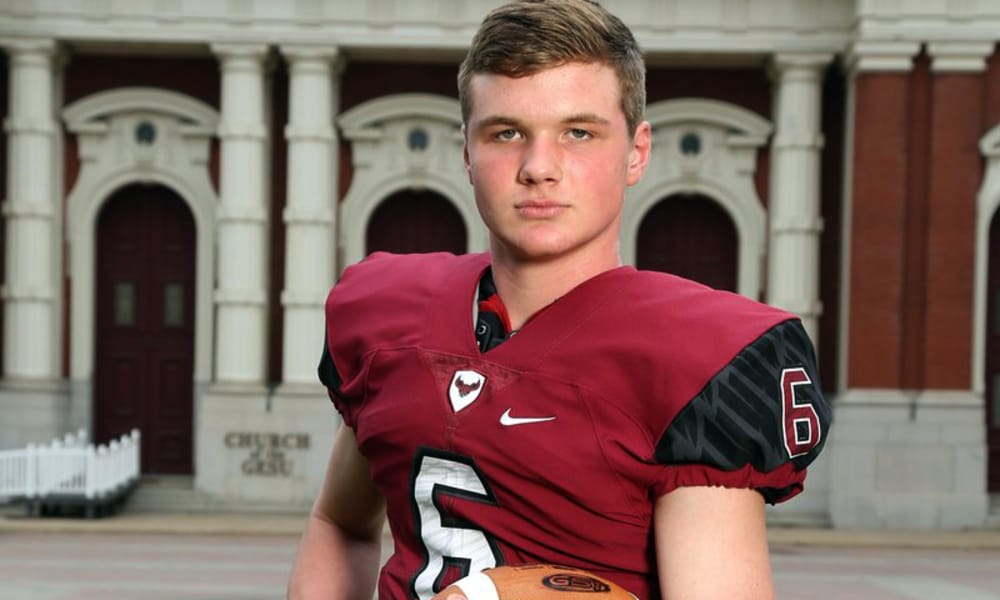 Philadelphia's Kyle McCord is one of a few big-time quarterbacks with serious early interest in Ohio State. (Kyle McCord/Twitter)

Have a question about Ohio State recruiting? This is the place for you, five days a week. Submit your questions on Twitter or on the Lettermen Row forums. Check in daily to see what’s on the mind of Buckeyes fans all over the country. Today we’re examining what’s become a very interesting 2021 quarterback race for Ohio State.

2021 QB recruiting seems to be heating up. Lots of guys high on the Buckeyes but the board doesn’t appear set yet. Do they pick a top guy and go all in soon? Who fits Day’s program best in your opinion

When Jack Miller committed to Ohio State last summer, it was a solid development for Ryan Day to have the 2020 quarterback position locked up because it allowed the program a chance to begin evaluating and getting to really know the Class of 2021 options when others were still chasing guys in the previous class. Then Day and the Buckeyes ran Dwayne Haskins onto the football field in the 2018 season. After a record-setting season by Haskins, Ohio State almost instantly became the hot choice for quarterbacks (and receivers) all over the United States.

“To see Dwayne’s development the last two years is pretty remarkable. I think that’s one of the selling points that we have,” Day said on signing day in February. “That’s just one part of it, though. Being able to compete for a national championship, being involved with a culture like we have here, getting around our guys, feeling who we are as a team was also important. That’s just one part of it.

“But for a quarterback, that is important for them. They want to be in an offense where they’re throwing at the high efficiency that we did last year. We’re throwing in an offense where it’s very pro-style oriented, mixed in with the college run game, with RPOs. We think we’re on the cutting edge that way. It’s exciting. That’s the response we’re getting from a lot of quarterbacks around the country. That mixed in with the other guys surrounding him, it’s obviously very enticing.”

Looking at the number of top-ranked early quarterbacks that have Ohio State as their early leader or in their very top group of schools, it would seem Day and are taking advantage of their newfound reputation.

Right now, the Buckeyes are the team to beat for three of the country’s best sophomore quarterbacks, and they very much in the mix for any number of others. On Sunday, Lettermen Row updated the most recent visits from Illinois quarterback J.J. McCarthy and North Carolina native Drake Maye. Both of those players, along with Philadelphia’s Kyle McCord, are very interested in Ohio State, and McCarthy and Maye have visited multiple times. McCord will make his second visit to Columbus in April for the spring game.

Ohio State also hosted Chesire Academy (Chesire, Conn.) quarterback Jack Brandon for his first trip to campus over the weekend, and the 6-foot-3, 185-pound sophomore left with his first college offer, something that will certainly make for an interesting development in his recruitment.

In total, Ohio State has offered six 2021 quarterbacks, and four of them have already visited campus at least once. The only prospects holding an offer who haven’t been to Columbus are Texas 5-star Preston Stone and California’s Jake Garcia, who told Lettermen Row last week that he’s hoping to be in town this summer for the first time.

The bottom line? If the Buckeyes are in a hurry, they could lock up the 2021 quarterback position soon. If they aren’t entirely sold on any of the young guys who have been on campus, then they’re still in good shape because there’s still plenty of time for evaluation in the months ahead. As they did a year ago with Miller, I think they’d prefer to have this locked up by the end of the summer because it’s absolutely vital as they recruit a handful of the country’s best receivers to have an upper-crust quarterback in the fold to line up with them.

As to the question of who is the best fit? That’s the big one, of course. Every player brings something different to the table, and if it’s just about premium passing ability, I think even that’s debatable. Each kid is still developing but already very good. I’m not in the business of saying which quarterback is best, nor do I know exactly what the Buckeyes are thinking. But I do think that right now they’ve not decided any one player is The Guy — but it’s plain to see the guy is likely coming from this group.

Here is some of the information Ohio State is working with based on the highlight reels for J.J. McCarthy, Drake Maye, Kyle McCord, Jack Brandon, Jake Garcia and Preston Stone. The best way to stay on top of all that recruiting #stuff? Subscribe to Lettermen Row’s Recruiting with Birm newsletter.