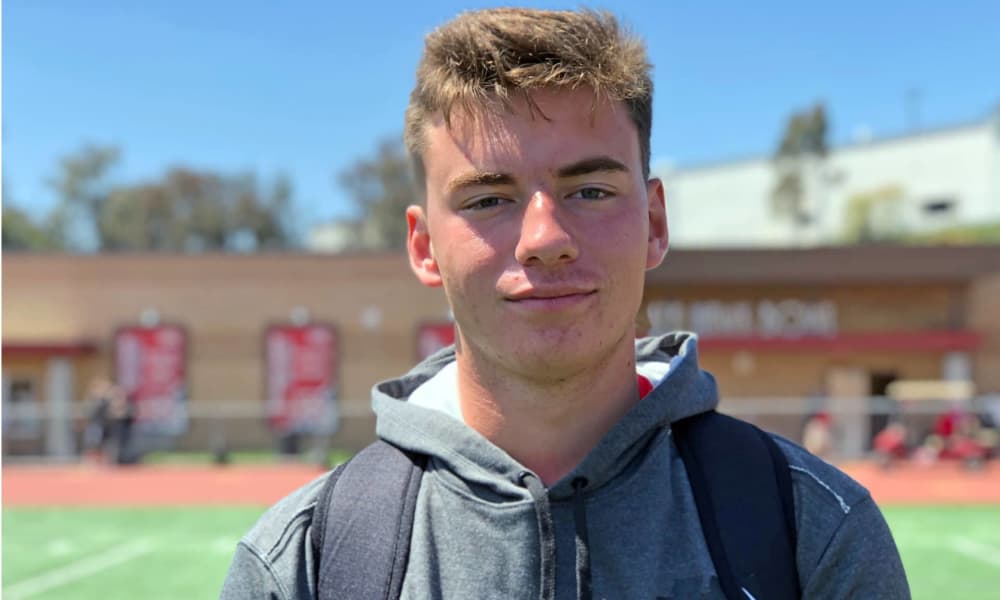 Stay in touch or be left out because college football recruiting is a 24 hour a day, 7 day a week obsession. What’s the latest news as the Buckeyes build for the future? Get that and more Monday through Friday on Lettermen Row.

Despite a pretty sparse position room in Columbus – only Dwayne Haskins has taken a collegiate snap among the three scholarship players on the Buckeyes roster – things remain cloudy as ever as Ohio State searches for its 2019 quarterback.

There have been a number of names bandied about over the course of the last few months, but the bottom line is simple, yet hard to hear: it’s just not a great year for quarterbacks nationally. The Buckeyes top overall target at the position, Pinson (Ala.) Valley 4-star prospect Bo Nix did exactly what everyone expected he’d do and followed in his father’s footsteps when he committed to Auburn in early January. Since then, it’s been a veritable crapshoot for Urban Meyer, Ryan Day and Mark Pantoni.

While new names have come – and gone – as potential “fits” for the Buckeyes, nothing has stuck and the top remaining names outside of Houston’s Grant Gunnell, who is still uncommitted, are all committed elsewhere. That’s not usually a problem for a head coach like Urban Meyer, but there is an increased level of difficultly when attempting to flip a quarterback as compared to other positions. It’s a position that is recruited a little different than most, knowing in most cases you’re “the man” for a certain school and that all relationships you develop with “your” school are being cultivated for you – the player – to be not just the leader of a recruiting class, but a four-to-five year leader in your future program. It’s a heavier commitment, in a way.

That’s why it feels like there’s been so little movement for Ohio State as they chase not one, but two different quarterbacks that seem to be firmly committed – and just to add another layer of fingernail-biting goodness – they’re committed to Big Ten rivals, too.

One of those player is Blue Valley North (Mission, Ks.) 4-star prospect Graham Mertz. Mertz is committed to Wisconsin but he’s remained at the top of the Buckeyes wishlist for months. He visited the school in April, but that was a matter of convenience as much as anything, according to the 6-foot-3, 205-pound gunslinger.

“I was in Columbus for a Rivals camp, so we stopped by for a day,” Mertz, speaking to reporters in California this weekend at the Elite 11 Finals, a gathering of the nation’s top prep quarterbacks. “It’s always cool to see a big-time school to see what they have. It was just a cool experience.”

The highlight of that trip Ohio’s capital was the chance to spend time with Buckeyes offensive coordinator Ryan Day and coach Urban Meyer.

“Coach Day and Coach Meyer, they’re great guys – and I know I say that a lot, there’s a ton of great coaches out there – but they dig  deeper than football,” Mertz said of the Buckeyes.  “Not a lot of guys do that.”

Ohio State is just one of a handful of elite programs trying to snatch the Badgers’ prize commitment. So far, he’s not showing any signs of budging.

Changes to the NCAA’s recruiting calendar make the next few June weekends much more important that they used to be for schools hoping to land official visits before a soon-to-be-senior shuts down his recruitment for the football season. That’s Mertz’s plan, and that’s why Ohio State is trying to find a way to work in an official visit sometime before June 25, when the now-mandated summer recruiting dead period begins.

“They’re trying to get an official date (set),” Mertz said of the Buckeyes. “I have the Rivals 5-star Challenge and The Opening after that, so I don’t have a lot of time.  They’re coming pretty hard with that. They’re trying to change their [system] to more of a quarterback that can stand back and sling it, like a Dwayne Haskins, so that’s what they’re selling pretty hard.”

So, with all the confusion at the top of the quarterback board, you’re looking at two weeks ahead that should define how the chase progresses through the summer, because Mertz wants to be done with his recruitment entirely before his senior season starts.

“Hopefully because the season starts,” he replied when asked when he wants to shut everything down for good.”I feel pretty good where I’m at right now. I know Wisconsin is a great fit for me, and I want to have my decision done before senior year.”

Is Mr. Rogers ready to name Columbus as his neighborhood?

It feels like Oak Park (Mich.) 2020 offensive lineman Justin Rogers has been on the verge of committing to Ohio State for months now and if you pay close attention to his Tweets, there’s no reason to think otherwise as we head into camp season.

After tweeting on Sunday about his most recent visit to Columbus – over the weekend – Rogers hinted that some big news could be coming on Tuesday.

What that means is anyone’s guess, though the implications are certainly large for the Buckeyes 2020 class. Jake Wray is the lone commitment currently for that group but there’s a serious push to lock up top offensive line targets early, and Rogers is definitely that.

As for his weekend trip to Ohio? That was – according to the 6-foot-4, 265-pound rising junior – more for his mom.

“It was just a visit,” Rogers, the country’s No. 1-ranked offensive guard told Lettermen Row. “More for my mom to see campus and stuff.”

Whether a commitment happens or not this week, Rogers said there’s a chance he’ll return to Ohio State again in June, depending on his ability to find transportation. For now, Ohio State remains at the top of the list with Michigan, Tennessee, Kentucky and others. His developing relationship with offensive line coach Greg Studrawa is a key reason for that.

“Our relationship is really good,” he said of the Buckeyes third-year offensive line coach. “We just talk about life and stuff. We almost never talk about football.”

Much ado about nothing

Urban Meyer and Jim Harbaugh walk into a college football recruiting camp and the whole world loses its mind.

That’s pretty much what happened on Sunday when Meyer, decked out in a 2014 National Champion jacket, and Harbaugh, eschewing his trademark khakis for a white Michigan pullover and blue pants, arrived at Grand Valley State’s Best of the Midwest camp. Each coach took a turn at the microphone, chatting up the players in attendance and delivering key messages that will be used by the teenagers as they try and realize their college football dreams.

Meyer’s message was simple: “be a good teammate” and “how well do you do in your biggest games?” Though the latter was perceived and consumed by social media shot at Harbaugh and Michigan, they’re the same sentiments Meyer has offered up prior to every single camp that I’ve ever heard him speak at. Harbaugh’s message, that players need to do what their coaches tell them in order to be great, was similarly generic and yet, correct.

While it’s fun to try and create theatrics – it’s June after all, football season isn’t here and we need something to do – the players in attendance heard two of the country’s elite coaches and left with wisdom from both.

“Not really,” Devell Washington, a 6-foot-4, 200-pound receiver from Bay City (Mich.) Central said when asked if anyone thought Meyer was taking a “shot” at Michigan. “I thought both coaches were there just trying to motivate campers. Knowing the success that they have had and players they have coached gave me the confidence to give it my all. I can see why their players would run through a brick wall for them.

“It was amazing. I got to meet and speak to Jim Harbaugh and Urban Meyer. It was cool to see them in person.”

Washington says he spoke at length with Harbaugh and the Wolverines staff, and briefly with Meyer, who was surprised that a player of his physical stature was just a 2020 prospect. Though he currently holds just three offers and grew up paying close attention to Michigan and Michigan State, interest from Ohio State could be a game-changer.

“I always paid more attention to the Michigan schools, but with Michael Thomas being one of my favorite players, I try to model my game after him,” he added. ” Thomas and Ben Victor are my size, so I like to watch them. [Urban Meyer] said he was impressed with my size and that he didn’t know I was in the Class of 2020.”

For Ohio State to enter the fracas for Washington, he’ll likely need to make a summer trip to Columbus to let Meyer, Zach Smith and the rest of the Buckeyes staff see him in person.

“I didn’t get a camp invite from them,” he told Lettermen Row. “I hope I do because my mentor/big brother is from Columbus and goes there a lot, so that would be an easy trip depending on the date.”

Birm: Coming home at Lettermen Row
Class Warfare: Who are the Buckeyes top targets for quarterback in 2019?
Advertisement