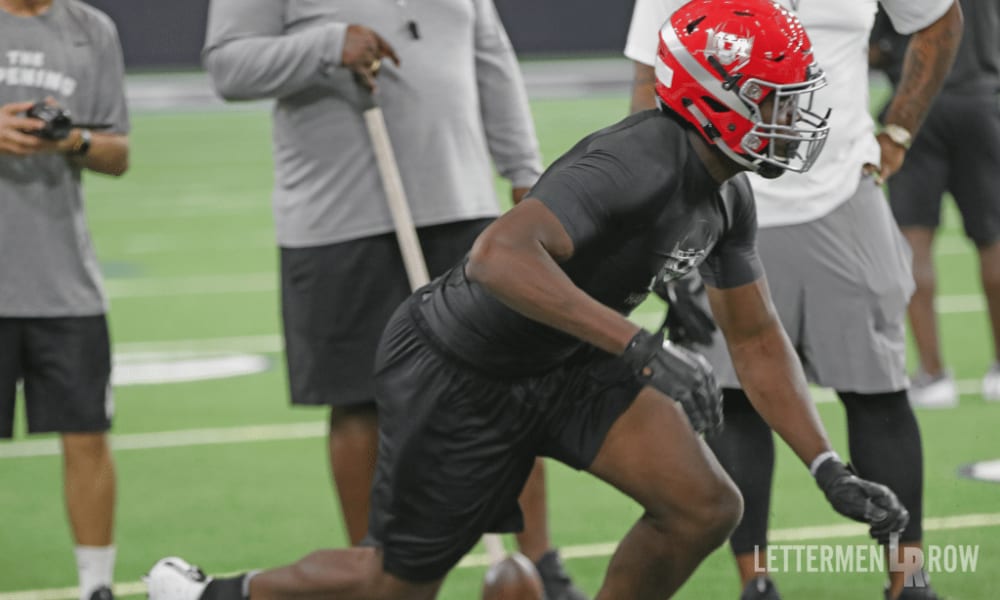 FRISCO, Texas — A recruiting decision from 5-star defensive end Zach Harrison will come as soon as he’s ready to make it.

“I’ve got to sit down and sort through it all,” Harrison said after Day 2 of The Opening Finals at The Star. “If I wait any longer, it’s not going to get any clearer.”

That could be bad news for Ohio State fans, because Harrison is a player Urban Meyer and his coaching staff simply can’t afford to lose in 2019. There’s a major need at defensive end and Harrison’s talent isn’t something you see every year.

What makes the news potentially worse for Buckeyes fans? The school that’s caused this current bout of confusion in the hometown star is Ohio State’s biggest rival: Michigan.

The country’s No. 4-ranked prospect said he doesn’t think the two schools, for all the vitriol shared between the fan bases, are really that different. That’s the root of the current conundrum.

“They’re really not contrasting at all — they’re really similar,” Harrison said. “If you get inside the programs and get to know them, they’re very similar programs.

“They run a similar ship. They’re both good programs with good history, good academics, good defensive line coaches, good head coaches. They’re different dudes, Coach Meyer and [Michigan coach Jim] Harbaugh. I’ve known them both for a while, so I know what I’m going to when I get into them.”

Ultimately, for Harrison, this decision may come down to whether or not he decides the 160-mile trip to Ann Arbor and the three to four years of college football that will follow will give him a chance to become his own person. That’s a hefty decision for a 17-year-old kid, even one with broad shoulders on a 6-foot-5, 245-pound frame.

There’s no doubt that staying home provides him a chance to be a lifelong hero in Columbus. The decision to head out of state to Michigan or potentially Penn State, though, could alter the way he’s viewed in the state forever.

“I’m more confused than I’ve ever been,” Harrison said. “I had a great time on both visits. There were good and bad things about both visits.

“The positives [for staying in Ohio] are that I’d be the hometown hero. Everybody loves Ohio State, and who’s not a Buckeye that lives 20 minutes from Ohio State? The negative is sometimes, you just wanna get away from home, be on your own a little bit. When your parents are 20 minutes away that’s kind of hard to do.” 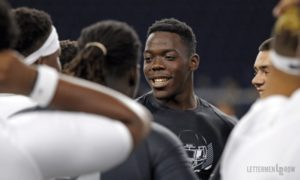 Zach Harrison is looking for answers in his recruitment. (Birm/Lettermen Row)

Michigan’s coaching staff made a number of changes in the offseason, and the decision to bring in linebackers coach Al Washington from Cincinnati is paying dividends with Harrison. That bond, along with a handful of players at Michigan he’s become close with, have thrown a wrinkle into what was at one time considered a slam-dunk recruitment for Ohio State.

“Just hanging out with the guys, I get along with those guys really well,” Harrison said. “I love Coach Washington. he’s a good dude, a big family man. It started a couple years ago when he was at Cincinnati, or last year, he came to my school and was recruiting one of my teammates. I started to talking to him and then he went to Michigan and started recruiting my area.

“The education is great there, the players, I love them. They’re building something special up there, and I like the strength staff there. I like Coach Harbaugh, I think he’s a good dude.”

The Buckeyes haven’t done anything wrong in the battle to land Harrison. They’re fighting against expectations and human nature. No one likes to do exactly what everyone thinks they should.

But to beat Michigan and Penn State, Ohio State will need to convince Harrison that three more years at home with his family 25 minutes away is worth it when the long-term goal is to be developed into an NFL talent and a first-class man. That’s where defensive line coach Larry Johnson and the Buckeyes have built the foundation of their relationship with Harrison. There’s a genuine trust and care between the two sides.

“Coach J is the best defensive line coach in college football, if not college football history,” Harrison said. “That’s a big thing for him, I’ve got a good relationship with him, he talks to my mom a lot, my family, which is important to me. I like Coach J.

“[Ohio State is] already proven. Coach J is a big reason why I’d go there, it’s my hometown school. Those are the reasons [to pick the Buckeyes], pretty much.”

The reasons he’d succeed at either school are laid out in front of Harrison.  There will be no more visits and limited conversation with coaches at the schools he’s considering. He’s just going to have to try and put all the pieces together.

“I have everything I need,” Harrison said. “If I knew the answer I’d be committed by now. I have no idea. I’m more confused than I’ve ever been.”