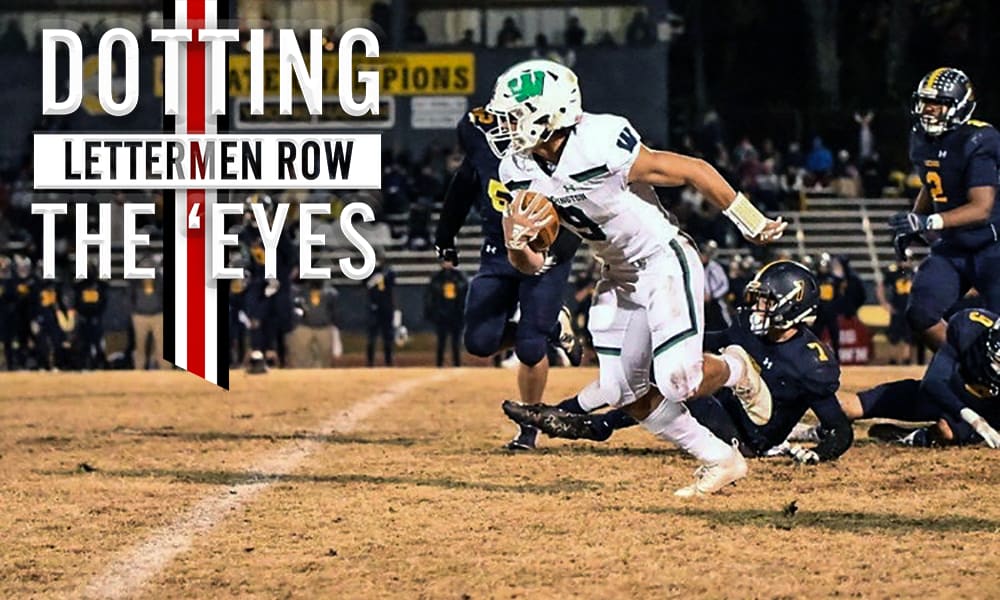 Ohio State target Will Shipley collected 25 touchdowns and more than 1,400 yards as a sophomore. (Will Shipley/Courtesy)

Stay in touch or be left out because Ohio State recruiting is a 24-hour, seven-day-per-week obsession. What’s the latest news as the Buckeyes build for the future? Get that and more Sunday through Thursday on Lettermen Row. Thursday’s notebook focuses entirely on getting to know North Carolina 5-star athlete Will Shipley.

The country’s top-ranked all-purpose running back, Will Shipley, doesn’t live too far down the road from where Christian McCaffrey plays his NFL football — fitting, because , he’s player with a lot of similarities to the five-star talent.

A 5-foot-11, 200-pound athlete, Shipley lines up at running back for Matthews (N.C.) Weddington High School. But his future — especially if it happens to be at Ohio State — is more likely as a slot receiver-type of player, similar to McCaffrey and former Buckeyes star Curtis Samuel, who also happens to line up alongside him for the Carolina Panthers.

Shipley has 24 early offers, including Ohio State. But unlike a lot of the stars in his recruiting class, he’s not yet started the deep dive into recruiting that might be expected for a player of his caliber. He’s visited just a few schools, and there’s not an Alabama, Ohio State, Clemson or Georgia on the list.

“I’ve visited Stanford, Northwestern and then all surrounding schools in the state,” Shipley told Lettermen Row. “And I’ve been to Virginia and South Carolina.

“I’ve never been the type of person to follow the norm. I always keep my priorities straight regardless of what opportunities are put ahead of me. God, family, academics and then sports. I am going to make the best decision for me and my family.”

As a sophomore, Shipley scored 25 touchdowns and ran for more than 1,400 yards on just about 200 carries. He also ran a 4.46 at an April regional camp for The Opening. He may not follow the norm or do what his peers do, but the dynamic playmaker is what every school in the country will be looking for on the field.

Right now, though, he’s not allowing himself to be too caught up in any one school.

“There are no schools sticking out yet,” Shipley said. “I’m going to focus on that more after the season. It’s going to be about a place with a family environment, about relationships.”

Getting used to the recruiting circus

The recruiting process is what players make of it.

It’s also, in a way, all about the support system around a player. For Shipley, that’s been a mixed bag to this point.

“I really never knew [the attention] would even happen,” Shipley said. “It kind of caught me by surprise early, and now I am just really grateful for everything I have.

“There haven’t been many recruits at my school. I guess the only I would say is probably [former Florida State commitment and North Carolina signee] Sam Howell. I was pretty close to him, and he was a big-time recruit.”

Howell’s example is worth following for Shipley, who acknowledges that the publicity has changed how people around his hometown treat him. And in turn, it’s affected how he handles himself.

“I think that just comes with the attention,” he said. “People’s perspective changes. You have a different reputation than you did before, and it is 100-percent different than before I was a recruit.

“It does make you walk on your tippy-toes. It makes you be careful about who you trust and who you confide in. It can be really tough sometimes.”

Shipley has been hearing from Ohio State for a few months, sparingly. The conversation is going to see an uptick in the next few weeks when Sept. 1 comes around and the lines of communication are opened up.

“If I recall correctly I got the go-ahead to call [co-offensive coordinator Kevin] Wilson,” Shipley said of his early communication with Ohio State, which led to his May offer.”I talked to him for a few minutes, and then he instructed me to call [receivers coach Brian] Hartline. I talked to him for a good amount of time.

“He’s a great coach and a great recruiter. He brings energy, I can feel it over the phone. I think that can be faked, but it feels genuine from Coach Hartline. We talk about a variety of things. Football is brought up, but not too often. When it is, it is always a good conversation. His knowledge is huge.”

There’s been no conversation with Ryan Day at Ohio State at this point, and Shipley is hoping that can change soon — whether it is on the phone or in-person in Columbus.

“I haven’t been in contact too frequently lately because of fall camp, and before that, I had my camp,” Shipley said. “So, haven’t gotten to speak to [Day]. I really do hope I can make it to a game. It is just tough with travel and having games on Friday night, but I think we might be able to make it to game.”

There’s a long way to go in Shipley’s recruitment, but fit-wise, he’s a pretty good match for Ohio State. He thinks the program could be a good fit for him, too.

“Ohio State is so successful and always has a chance to contend for a national championship,” he said. “Their offense is just fun to watch. And they adapt to their recruits rather than making the recruits adapt to what they aren’t very good at.”

Continue Reading
You may also like...
Related Topics:Featured, will shipley