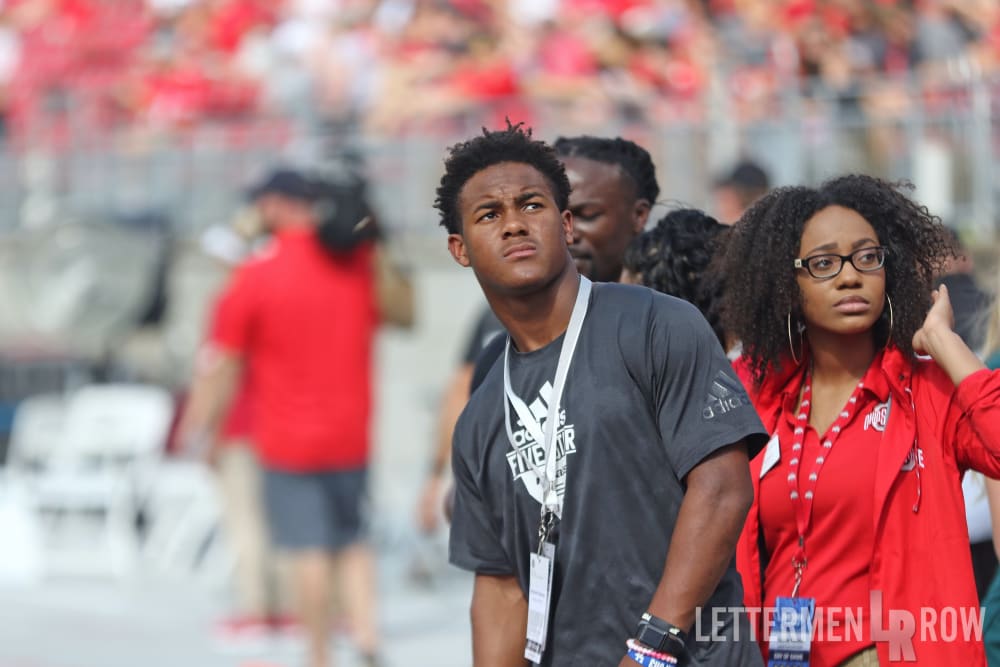 Stay in touch or be left out because Ohio State recruiting is a 24-hour, seven-day-per-week obsession. What’s the latest news as the Buckeyes build for the future? Get that and more Sunday through Thursday on Lettermen Row, including this evening’s discussion on Wandale Robinson and Nick Broeker.

There are not many true options left when it comes to Ohio State wide receiver recruiting in 2019, but there’s no doubt at all that the top of the short list is Frankfort (Ky.) Western Hills 4-star Wandale Robinson.

One of the country’s most electric offensive prospects, Robinson went from long-shot to realistic in the last two months following a pair of visits to Ohio State, including an official visit over the weekend of Oct. 6. Following that visit, most of the information flowing about Robinson was very pro-Buckeyes and led to a rash of industry experts putting in a Crystal Ball prediction to Ohio State.

In the last few weeks, though, the post-visit buzz has worn away and concerns about Robinson’s eventual decision on Nov. 1 have percolated. It had been thought that Kentucky would prove to the biggest obstacle, but now sources close to the Buckeyes have suggested that it’s Nebraska which appears to be gaining some momentum. Robinson has visited Nebraska officially, and buzz about a return trip to Lincoln before his decision date has started up. If that’s going to happen, one would think it’d occur this weekend when the Huskers inexplicably host Bethune-Cookman.

That’s why it’s important to note that Ohio State receivers coach Brian Hartline is expected to visit Robinson on Friday night. It’s likely the last chance for the Buckeyes to underline their pitch to Robinson. That pitch? Four of Ohio State’s top receivers are likely heading to the NFL after this year and there’s not a single player on the roster with the skill set that Robinson possesses — one remarkably similar to that of Purdue freshman Rondale Moore. Robinson and Moore actually utilize the same trainer in Kentucky, and that’s why it’s interesting to try to understand the potential logic behind a commitment to Nebraska instead of Ohio State.

The Buckeyes took a shot at Rondale Moore a year ago but fell short to Purdue, partly because of Jeff Brohm’s plan to make Moore the focus of the offense. Brohm, who like Moore is a Louisville prep legend, has delivered on his promise.

There’s little doubt that if Moore had chosen Ohio State, he’d have had a much more difficult time finding the field than he’s had at Purdue, simply because of the depth of the receiving unit. That’s not the same decision that Robinson has to consider. But the first part of it, the knowledge that at Nebraska he will have a better chance to be the focus and not just another piece of the puzzle, has to be appealing.

If Ohio State isn’t able to lock up Wandale Robinson, my opinion is that they’ll stand pat at the position and stick with just Garrett Wilson and Jameson Williams at wide receiver.

The Buckeyes offered Ole Miss offensive tackle commitment Nick Broeker a few weeks back and have stayed in steady contact with the 3-star Illinois prospect. He and Ohio State are working to grow a relationship and planning an official visit.

“They’ve remained in contact,” he told Lettermen Row. “I’m gonna figure out [an official visit] once my season is over. We start playoffs this weekend.”

No other programs have tried to get involved in his recruitment, just Ohio State. The coaching staff isn’t being shy when addressing their needs at offensive tackle in recent conversations with the 6-foot-6, 285-pound lineman.

“Urban Meyer mentions it every time I am on the phone with him,” he said. “He makes it very clear whenever we talk that they are thin at that position.”

The end is here for Ohio State and Peyton Powell

The chase for Peyton Powell has reached a conclusion. The Odessa (Texas) Permian star announced his college decision on Twitter on Tuesday afternoon.

Ohio State was the favorite to land him on multiple occasions, and sources close to the program have confirmed they felt very confident they’d do so since his June official visit.

Yet it seems obvious now that Powell never truly wanted to leave home, nor did he ever truly want to be recruited as a defensive player.

Ohio State was recruiting Powell as a defensive back. The Buckeyes have commitments from defensive backs Ronnie Hickman, Bryson Shaw and Jordan Battle. Fort Wayne (Ind.) Wayne athlete Craig Young is also capable of playing defensive back if needed in the future.