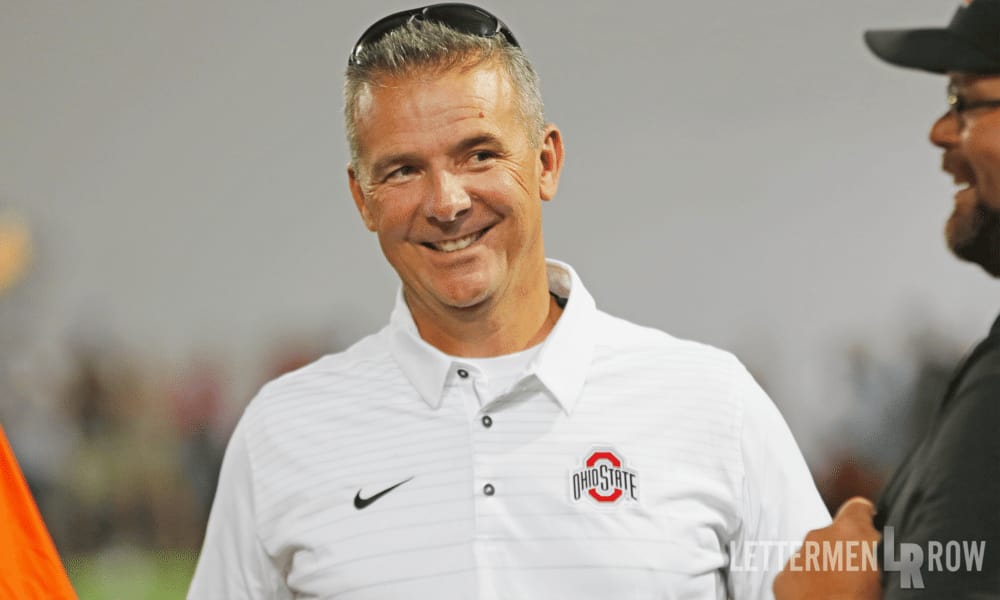 Urban Meyer is all smiles after a key recruiting weekend in Columbus. (Photo: Birm/Lettermen Row)

Recruiting often allows for some interesting moments, and no doubt one  occurred over the weekend when Montvale (N.J.) 4-star offensive lineman Luke Wypler visited Ohio State.

Then and now!!! ⭕️ pic.twitter.com/kSMdo78Hze

As you can see, Wypler has had a little history with current Buckeyes defensive coordinator Greg Schiano. The pair have known each for years dating back to Schiano’s days at Rutgers, and now the 6-foot-4, 285-pound Wypler is a top-100 prospect in the Class of 2020 as an offensive lineman.

“Coach Schiano and I have been in contact once or twice a week,” Wypler told Lettermen Row prior to the visit. “I’m excited to get there and see the campus and the football facilities.”

“It was awesome,” Wypler said. “More than I expected it to be.”

Though it’s been primarily Schiano doing the recruiting to this point, Wypler spent much of this visit with offensive line coach Greg Studrawa. He was impressed by the Buckeyes focus and plan for their players.

“Coach Stud showed me the way they approach player development with strict plans,” he said. “That’s what stood out of the most.”

Wypler sits with 23 offers already, including one from the Buckeyes, and the nation’s No. 4-ranked guard is trying to be diligent in his college search.

“I’m looking for a place that if I would take the football part out of it, I still would be happy there,” he said when asked what he’s looking for in a program. “Right now everyone is in play. There’s really no favorites yet. I’m just kinda going about it with an open mind.

“When I find the schools that I feel most comfortable with, I will probably narrow it down. But a commitment isn’t going to be for a while.”

Right now, it’s safe to think the Buckeyes will be in that top group of schools while he considers his options.

Adonis Otey has Ohio State near the top following visit

The Buckeyes hosted a trio of big-time athletes from Tennessee during their one-day camp on Friday, including Murfreesboro Blackman’s Adonis Otey.

Blackman, if you recall, is the home of current Ohio State freshman tailback Master Teague III. Otey is a 3-star cornerback for the Blaze, and he has offers from 19 schools, listing Alabama, Florida State, Oklahoma and Ohio State among them. He’ll make his college decision Aug. 1 and told LR that the trip to Ohio made a big impression on him.

“The best part was when we went and talked to coach [Urban] Meyer, he told us that we were high on their board,” Otey said. “I’ve been all over the place, but it’s just Ohio State – that’s what stands out – especially to me, because of their success with defensive backs.”

Ohio State sees Otey, he said, as a player capable of lining up either at safety or at cornerback. He spent most of his visit working with new cornerbacks coach Taver Johnson and enjoyed the experience with him.

“He is a great coach,” Otey said of Johnson. “I enjoyed my time with him.

“He was kind of laid back because it was only three of us in that group, but we still got a good workout.”

With a decision coming soon – and Ohio State already having two safeties committed – it will be interesting to watch how the Buckeyes value Otey. There is a sense that if they pushed for a commitment here, they could get it.

Another 2019 prospect that is worth paying attention to – and another guy that Ohio State will have to decide to make a real push for sooner rather than later – is Crystal Lake (Ill.) South 4-star offensive lineman Trevor Keegan.

On Sunday, Keegan, a 6-foot-6, 290-pound tackle ranked as the top 2019 prospect in the state of Illinois, put his top six schools on Twitter.

Ohio State made the cut, but Michigan is probably in the best position at present thanks in part to his relationship with Ed Warinner, who was recruiting Keegan while an assistant coach at Minnesota. Michigan also has a little family edge. His mother grew up just outside of Ann Arbor and his grandparents still live there and have been season-ticket holders for the Wolverines since he was a small child.

The Buckeyes have three commitments from offensive linemen already and still appear to need another tackle in 2019. If they want it to be Keegan, they may need to make a move in that direction sometime very soon.

He’s expected to visit Michigan again on June 22. If I had a 247Sports.com crystal ball, the Wolverines would get my pick.

Speaking of Michigan and offensive linemen, the Buckeyes threw their hat in the proverbial ring for a pair of 2021 linemen who camped in Columbus last Friday.

Had a great experience at the Ohio State football camp! And working with @CoachStudOL and @taverj and competing against the other top prospects around the country! It’s so humbling to receive an offer from Thee Ohio State Buckeyes,I cant thank you guys enough! #OhioState#Buckeyes pic.twitter.com/7vGzu9AM2S

Thank you Ohio State Coaches for having an outstanding Camp. The best part was receiving an offer at the end!! Thank you @CoachStudOL and @taverj for an amazing day! pic.twitter.com/4KM0VO9Equ

There are three years left of of high school football for both Spindler (6-foot-4, 250 pounds) and Dellinger (6-foot-6, 250 pounds) and it sets up to be an interesting race for their services. Michigan and Michigan State have each already offered as well.

With Harry Miller committed, who could be next for the Buckeyes 2019 recruiting class?
Class Warfare: Numbers dwindle as Ohio State polishes up 2019 offensive line class