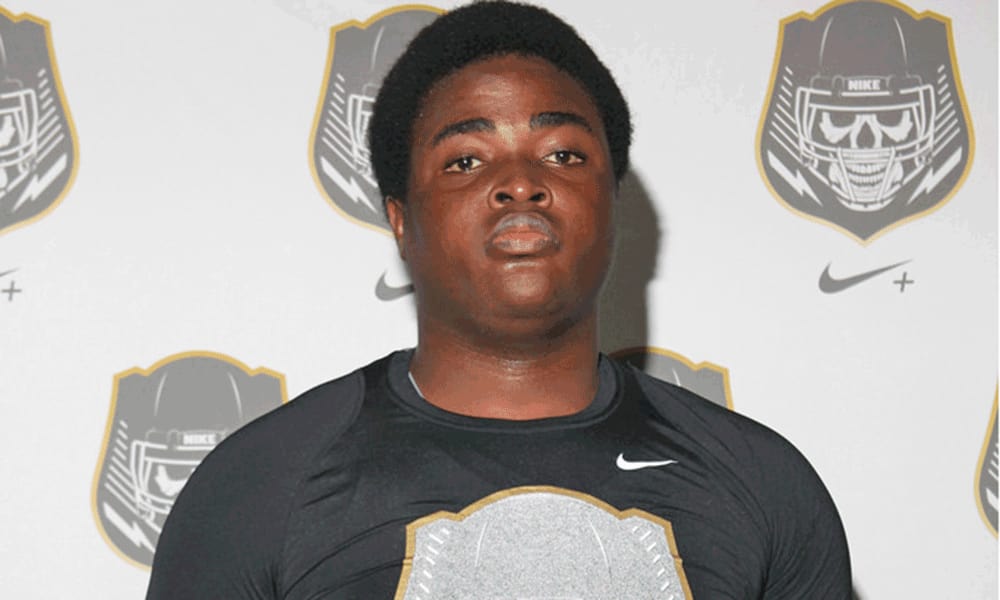 Stay in touch or be left out because Ohio State recruiting is a 24-hour, seven-day-per-week obsession. What’s the latest news as the Buckeyes build for the future? Get that and more Sunday through Thursday on Lettermen Row, including tonight’s updates on a few players hoping for an Ohio State offer.

In case you missed it, Ohio State has had a little bit of an issue recruiting along the offensive line to this point in 2019. Yes, there are three really good, really solid commitments at the position. But in truth, the Buckeyes would prefer to land five or more linemen in this cycle, and there seems to be little momentum working in their favor with any of the top targets on their board.

This may be a case where Ohio State needs to circle back and revisit some players that they evaluated early in the process. That process might start with Kansas City (Mo.) Rockhurst offensive tackle Danielson Ike, a 4-star prospect who is about as raw as it gets — but with a lot of upside. He’s only played one season of football.

When you consider that background, Ike’s 14 scholarship offers are pretty impressive, especially since they include opportunities from Alabama, Michigan, Oklahoma and Nebraska. He does not have an offer from Ohio State, the first school he paid attention to when arriving in America.

“Ohio State was the very first college I learned about when I first got to the United States,” the 6-foot-6, 330-pound tackle said. “Mainly because of Orlando Pace. After a while, I began to really like their winning mentality.”

There has not been much contact between the two sides since Ike started playing football, though.

“It’s been a while since I’ve had any contact with Ohio State,” Ike said. “I’d love to hear from them. I hear mainly from Oklahoma, Michigan, Louisville, Mississippi State, Iowa State, Nebraska and Indiana.”

If the Buckeyes were to reach out again, he’d welcome their communication. It’s not too late for any school to get involved in his recruitment.

“It’s not late at all,” he said. “That’s why I’m waiting until my season is over before I make a decision.”

There are a number of really good players in Ohio waiting for an offer from the Buckeyes. One of them in Cincinnati Reading Community’s Tanner Cromer. He’s the 33rd-ranked prospect in Ohio in the Class of 2020, a 6-foot-4, 215-pound defensive end who is still waiting for his first college offer. He visited the Buckeyes for their Big Ten opener against Rutgers.

Great too be back at the shoe #GoBucks pic.twitter.com/Qf1zM0LM51

“My visit was amazing,” Cromer told Lettermen Row. “The weather was bad, but being at the ‘Shoe? There’s really nothing that can interfere with or mess up the day. I got to meet a lot of 2020 guys up there as well and talked to [Ohio State defensive line] Coach [Larry] Johnson for the first time, so hopefully we can grow closer in these next few months.”

Meeting a legendary coach like Johnson is always a unique experience, and Cromer is looking for more contact with the Ohio State assistant soon.

“He was great,” Cromer said. “He just asked how the season was going and told me he would be in contact with my coach after the visit and that we will talk after my junior season.”

Dayton’s Sammy Anderson a player to watch for 2020

Speaking of instate prospects in the Class of 2020, there’s one to know at Trotwood-Madison High School. His name is Sammy Anderson, and he could be the best defensive back in Ohio regardless of class. He has early offers from Virginia, Georgia Tech, Cincinnati, Boston College and five more.

Anderson, 6-foot-2 and 170-pounds, popped onto the radar this past June during a one-day camp in Columbus and was back in town for Ohio State’s season opener against Oregon State.

“They’ve been recruiting me since the summer,” Anderson told Lettermen Row. “I don’t know if they’re going to offer or not, but it means a lot to me to be invited there for a game. I had a good time there.”

Anderson is entering his third year of varsity football and expects to return for at least another Buckeyes game this fall.

We may as well go back to The Show Me State and show you Antonio Doyle, a 2020 linebacker from Hazelwood West High School. Doyle is a 6-foot-3, 220-pound prospect with an early 3-star ranking in the 247Sports.com composite ratings. He has Nebraska and Missouri offers to his name.

He told Lettermen Row that he’s recently been in contact with Ohio State and is hoping to get a visit set to the school for this fall.

“I’m still trying to work out a date to get that visit settled,” Doyle said. “I just need a date that works for both sides and I’m coming.”

“I’ve talked with Urban Meyer, [Director of Player Personnel] Mark Pantoni, and a little with [Ohio State linebackers] Coach [Bill] Davis,” he said. “They haven’t said anything about offering just yet, we’re trying to build a bond, checking in on me daily with school and practice. Mainly they’ve just been telling me to stay on my grades.”