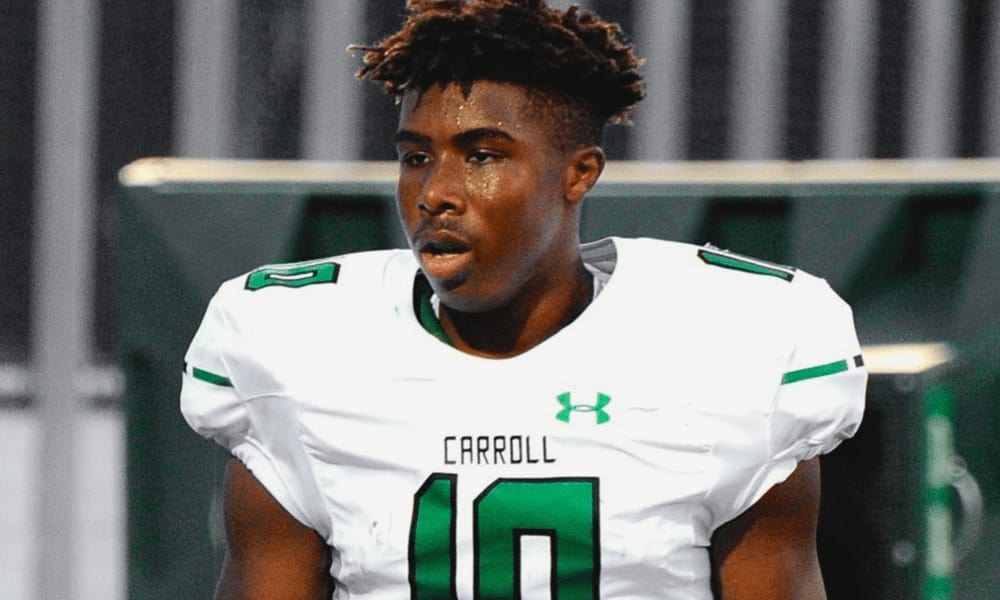 Ohio State made a big impression on Texas cornerback RJ Mickens during a weekend visit to Columbus. (Photo: Twitter/RJ Mickens)

When Jeffrey Okudah, a 5-star prospect in the Class of 2017, signed with Ohio State, a lot of people thought it could have a last affect when it came to the Buckeyes recruiting the state of Texas.

Okudah was the country’s No. 1-ranked cornerback out Grand Prairie, a suburb of Dallas. Three years later, another 5-star cornerback – RJ Mickens – from suburban Dallas sees how could follow Okudah’s path to Columbus. Okudah isn’t the only former 5-star prospect from Texas that Mickens had a chance to talk with during his recent two-day trip to Ohio State.

“I know Jeff personally,” Mickens, from Southlake Carroll High School, said of Okudah following Friday night’s camp at Ohio State. “I talk to him a lot. I also got a chance to talk to Kendall Sheffield and  I got to hear their insight into the inside of this place. It’s good to talk to guys that have been here and come from where I come from.”

Mickens heard the insight from his peers and left campus sounding like a recruiting brochure. The Buckeyes program made a big impression on the 6-foot-1, 180-pound defensive back.

“It’s a great place, they’ve got a whole lot of tradition her at Ohio State,” he said. “They’ve won a lot of championships and produced a lot Heisman trophy winners. They win a ton of conference championships – 36 of them – and they have 110,000 people at every game. I want to play in big games, so that stood out a lot to me.”

If it sounds to you like Ohio State is in the mix for Mickens, you’re reading this correctly. He will return to Columbus for the second time at some point this fall and check out what it’s like to be in the stadium with those 110,000 fans.

“I plan on coming back to Columbus for a game this fall,” he said. “They’re really high on my list, there’s a lot of schools up there with them, but they’re at the top top.”