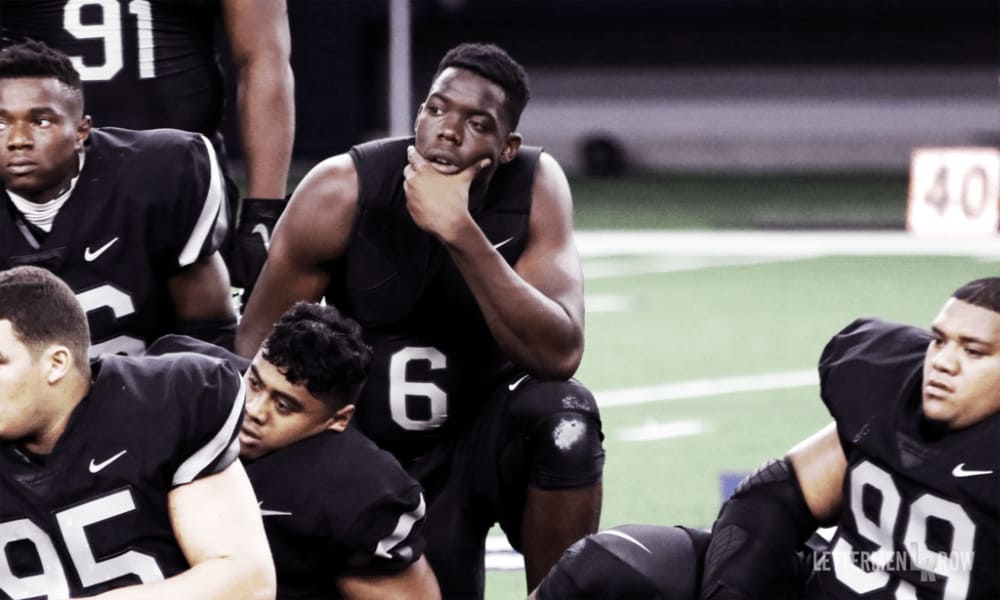 Ohio State will keep waiting for Zach Harrison to sort out his future. (Birm/Lettermen Row)

More trips on the docket for Zach Harrison?

It’s a pretty important time of the year for Ohio State recruiting and the future of the football program in general. You know, with the whole Urban Meyer being on administrative leave thing and all.

As I  wrote earlier today, if there’s a good time for the Buckeyes to be in this coaching purgatory, this month of August may be it. Sure, it sucks for the football team that is preparing for a Big Ten title defense, but on the recruiting front, it’s a really slow time of year. We’re in a dead period, coaches at both the high school and college level are focused on season prep, and in most cases, kids that are close to committing will make their decisions regardless of what’s happening because they’re generally closer to Ohio State’s assistant coaches than Meyer.

That isn’t the case for a player like Zach Harrison, though. The country’s No. 4-ranked 2019 prospect has been as close to Meyer as anyone in his recruitment. He’s closer to Meyer than any of the other coaches still involved with him, so he and his family are sitting and waiting with particularly bated breath to see what happens at Ohio State.

From Adam Kramer of BleacherReport.com:

Since the Meyer news erupted, the Harrisons have yet to explore the situation in depth. This is partly because, at the moment, the Harrisons say any decision would be based on speculation on their part.

What would they do if Meyer is no longer there? How many of his assistants would still be there? What would the program look like if Meyer is retained? What should Zach do now? All are questions yet to be answered.

“It just has to play out,” Tracey says. “I don’t know if that’s going to change his mind either way. Zach is far more focused on Orange football right now.”

The focus may be on his high school team, but Harrison may use the extra time to get some extra looks at his three top choices. He has no plans to make a decision anytime soon so if there’s a chance to visit his top contenders, he may as well do that, right?

In the coming months, Harrison hopes to watch a game at Penn State, Michigan and Ohio State. With his original commitment date scrapped, he’s no longer attaching a timetable to his decision.

He wants to sign with his future team in December so he can enroll early and be involved in spring practice before his freshman season. But outside of that, he has no plans on when he will announce.

Ohio State fans should have some clarity in the Urban Meyer situation before then.

I wrote before I went on vacation about Odessa (Texas) Permian athlete Peyton Powell and how his recruitment was about to take an interesting turn thanks to a recent offer sent his way by the Oklahoma Sooners.

We’re just about two weeks away from the date that Ohio State is set to find out if its months-long pursuit of Odessa (Texas) Permian athlete Peyton Powell will bear fruit.

I say maybe because the 4-star athlete picked up a big, potentially-game changing offer on Monday from a school that he has some family connections to and is on Ohio State’s football level. I think that offer could possibly change Powell’s plans completely.

Well, that ended up being correct, at least for now. Powell was originally slated to make his college decision today, but he decided to push that back at least another month and a half.

New avi by my guy. off twitter till the commitment.. 9/26/00 pic.twitter.com/d1yR7dkMMO

My 247Sports.com crystal ball was set on Ohio State, but I’ve changed it to Oklahoma. I think it’s likely at this point he picks the Sooners whenever he can make his way to Norman for a visit. He took his official visit to Ohio State in June.

Ohio State commitments that had been silent for much of the last two weeks are beginning to emerge from the woodwork, another sign that perhaps an end is in sight to the uncertainty surrounding the investigation.

New Jersey athlete Ronnie Hickman spoke to 247Sports.com about the status of his commitment over the weekend. He confirmed to Gus Ramos of 247Sports that he was 100-percent committed to the Buckeyes and reiterated that to Lettermen Row on Monday morning.

“I’m a little bit tired of [the speculation],” Hickman said. “I hope it’s almost over.”

Hamilton said that no matter what happens, he’s not going anywhere but Ohio State.

“I’m fine, me and my parents are,” Hamilton told Lettermen Row. “We hope for the best for Coach Meyer, but whatever happens I’ll still be 100 percent committed.”

Buckeyes in final 5 for another major hoops prospect

The Buckeyes basketball program could be one step closer to adding a third, final and instrumental piece to its 2019 recruiting class.

Ohio State has become the fashionable choice in this race over the past few weeks, picking up a handful of crystal-ball predictions from well-connected college basketball recruiting insiders over the last week.

The country’s No. 47-ranked prospect will make an official visit to Columbus over the weekend of Sept. 1. Ohio State’s 2019 class currently has two players in it, point guard DJ Carton and small forward Alonzo Gaffney, and is regarded as the Big Ten’s best class at present.

As a junior, Liddell averaged 20.2 points and 8.2 rebounds per game en route to earning the title of Mr. Basketball and Gatorade Player of the Year in Illinois last season. There is no specific timeline for a decision. He unofficially visited Columbus on June 8.