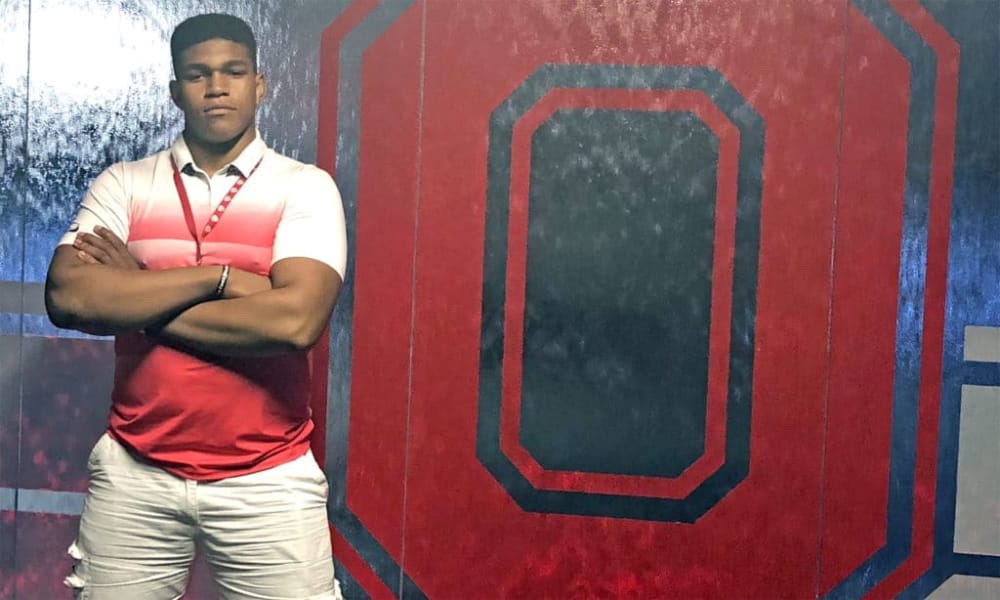 Ohio State needed to hit a home run with Walter Rouse on Wednesday, and it appears they did. (Walter Rouse/Courtesy)

Ohio State made a big impression on 3-star offensive tackle Walter Rouse and his family following a key Wednesday afternoon visit. It wound up being an abbreviated visit, but it almost never happened at all.

“The Ohio State visit was great, even for the amount of time I had,” Rouse told Lettermen Row about the trip from Washington (D.C.) to Columbus. “I missed my first flight due to a family emergency and had to take a later one.”

It would have been easy for Rouse to abandon the trip altogether, but instead he and his mother arranged for a delayed departure and arrived into town around 1:00 p.m. From there, the Buckeyes went to work showing Rouse everything that he and his mother would need to see — but doing it at warp speed.

“We definitely got to see the big picture of academics,” Rouse said. “Especially the areas I am interested in, like medicine and engineering. We spent a lot of my time with the chief medical officer … and his colleagues along with others to get a true idea of how [balancing school and football] would all be possible. I think the common dominators were generally the same. ‘Yes, it will be challenging. Yes, it’s a lot of work.’ But with hard work and working with academic support, knowing the number of classes and labs and summer class structures, it is possible.

“They gave numerous examples of former players and current guys doing it. We got into classes, labs and when and how they are taken. We discussed early engagement and how being involved from your freshman year can help determine if I wanted to stay with one area of interest or try something different. Wherever I go I still have to take my core classes along with playing football. We walked away feeling I would be supported.”

This isn’t lip service from Rouse, who is also considering Stanford, Duke, Notre Dame, Virginia and a host of other top-tier academic institutions. He’s a young man with a bright future whether he plays football or doesn’t. The on-the-field stuff is just one more avenue to get to his final destination.

Sources close to the Buckeyes felt prior to the trip that this was nothing but a courtesy visit from the 6-foot-6, 270-pound tackle. But they felt that shifted considerably during the visit. It’s clear from talking to Rouse that he felt a strong pull to the Buckeyes as well.

“[Urban] Meyer and the coaching staff went above and beyond,” he said. “I couldn’t see anything that I didn’t like or wanted to change. I was able to check a lot of my own boxes about the academics, the football program, interaction with coaches and players and get a feel for if I could see myself on campus in the classrooms and in the locker room. We discussed my return for an official sometime during the season. So that shows how much they moved up on my list.

“I want it all. Great academics and a winning program that is competing for a national title. I want to be surrounded by like-minded individuals in a program that will continue to develop me both on the field and off the field. Like Urban Meyer said at one point to me, ‘You only get one swing … swing as hard as you can.'”

The Buckeyes took their best swing at Rouse. Will it be enough to put them in real contention for the country’s No. 48-ranked offensive tackle? It appear so.

“It was great meeting both Coach Meyer and [offensive line coach Greg] Studrawa. I truly felt how committed they were to Ohio State and its players.”

The 2020 Ohio State commit is the complete package. He leads the way for a very impressive 2020 Class of Ohio State, which currently has the second-best class on 247Sports.

Johnson is the only current Ohio State verbal named to the first-team. He says the honor is something he doesn’t take lightly.

“I means a lot to me,” Johnson told Lettermen Row. “It shows the hard work our coaches and teammates went through to allow me to get to this point. At the same time, I must take the accolade and refocus on the season in front of us and strive to considered again in the postseason.”

The 6-foot-7, 285-pound tackle may be the only current commitment on the first team, but he’s hardly the only Ohio State target on the list.

Here’s the rest of the names to know with the 2018 season just about one month from kicking off.

Ohio State commitments Jake Wray and Luke Wypler each made the second-team squad.

The Clovis (Calif.) Buchanan 5-star prospect was straight and to the point about that question when reached for comment on Thursday morning.

“It doesn’t affect my recruitment at all,” Milton said. “When I choose a school, I’m going there to take people’s spots.”

Of course Milton doesn’t mean he’s going to take anyone’s spot in a recruiting class, but he’s really just betting on his own talents. He’s not going to concern himself with any players on the current roster or in the recruiting class of the places he’s considering. He remains a top target for Ohio State in 2020.

Let’s flip over to the basketball court for a moment and check in on one of Ohio’s best 2020 hoops prospects: Toledo’s Zeb Jackson.

The Maumee Valley Country Day guard has become one of the country’s hottest young players. He has not let the hype get to his head though.

From Nick Piotrowicz of the Toledo Blade:

“It’s been a normal summer,” he said, smiling. “Outside of the coaches and offers and all that.”

Of course. That small detail: 11 schools have made offers to Jackson since May, a list that includes Ohio State and at least one school from every major college basketball conference. Then there are the meetings with Tom Izzo at Michigan State and John Beilein at Michigan, the phone that never seems to stop lighting up with texts, calls, and direct messages from college coaches, and the small avalanche of mail that keeps showing up at his Toledo home.

Ohio State has been involved as well. The Buckeyes currently have both early predictions on the 247Sports.com crystal ball and are one of 14 early offers for Jackson. Of course, Ohio State has a storied basketball tradition when it comes to recruiting Toledo. The names are some of Ohio State’s all-time best players: Kelvin Ransey, Dennis Hopson, Jim Jackson and William Buford among them.

Jackson’s AAU coach is Quincy Simpson, the father of Michigan junior-to-be Xavier Simpson. He’s coached a handful of the best players in the Midwest in recent years and thinks the 6-foot-3 Jackson can be one of them.

From work ethic to skill to maturity, Simpson believes Jackson can be an NBA player.

“I’ve been around a lot of guys. I’ve coached pros, seen a lot of pros, but he’s just got a lot of things you cannot teach,” Simpson said. “He’s only going into his junior year. You can only imagine this time next year.”

The big question in the next year for Buckeyes fans will be whether or not Chris Holtmann and his staff can lock Jackson in early like they did with 2019 4-star Alonzo Gaffney.