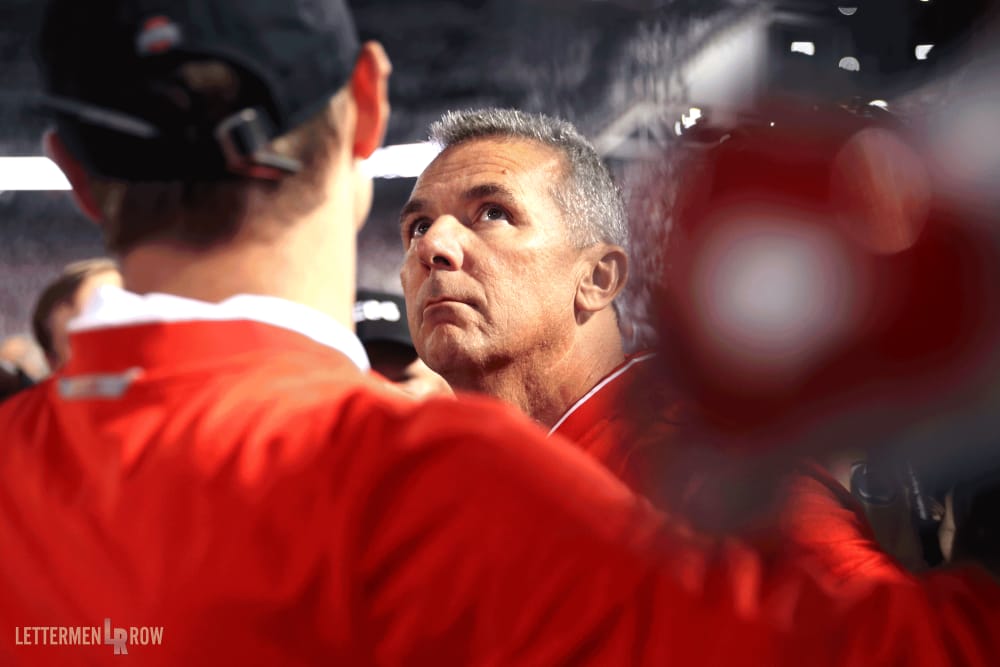 Stay in touch or be left out because Ohio State recruiting is a 24-hour, seven-day-per-week obsession. What’s the latest news as the Buckeyes build for the future? Get that and more Sunday through Thursday on Lettermen Row, including today’s discussion about Urban Meyer’s plans for the future.

Speculation about Urban Meyer’s future at Ohio State has been all over the place since August, and his return to the sidelines in September hasn’t stopped the rumor mill from running amok. National sportswriters and college football analysts have made a living in recent weeks lamenting Meyer’s sideline manner and how he’s nearing the end of his road in Columbus.

On Monday, Meyer was asked directly whether or not he’s returning to Ohio State in 2019.

“I plan on coaching,” Meyer said during his weekly press conference.

When pressed to clarify whether or not that meant he’d absolutely be back with the Buckeyes, Meyer answered: “Yes.”

There have been no direct, public assertions that questions about Meyer’s future were hampering Ohio State on the recruiting trail. But there’s also little doubt that every school recruiting against the Buckeyes has found a way to throw the innuendo out there. And opponents should do that, whether it’s true or not. If there’s an advantage, perceived or otherwise, that can be found when recruiting a player, it needs to be taken.

Ohio State hasn’t been unable to come right out and declare that Meyer will be coming back because they’ve had no reason to do so — and he is under contract until 2022. The Buckeyes have also been able to counter, and in some ways mitigate, the impact that his departure could have by pointing to the possibility of a succession plan in Ryan Day.

Whether or not there’s been any validity to the rumors, Meyer’s situation at Ohio State has no doubt exposed a crack in the foundation of the castle. Now, with Meyer’s response on public record, it should provide a little stability on the recruiting trail for the prospects that have been waiting to hear it from Meyer himself.

Meyer acknowledged in September that he’s still been dealing with arachnoid cyst issues, which have resulted in extreme headaches and are often exacerbated by stress. He had surgery to alleviate the issue in 2014, but that’s a serious health concern that is perhaps more severe than is widely known. Either way, he’s not using the condition as an excuse for his or his team’s performance and his health isn’t causing him any more issues on the field than it ever has before.

“I’m fine,” Meyer said. “I want Ohio State to be successful in the worst way, and I’m working extremely hard to make sure that’s happening. I love Ohio State, I love our players. The issue, I don’t want people to worry about me. I want to make sure that we’re getting some things right around here.

Meyer was on the recruiting trail last week and no commitments, nor their families, have expressed any concern that he will not return for the long haul. Time will tell if any other recruits that had concerns will now feel more confident in his future as well.

Do you want to help a pair of long-time Ohio State commitments who are working hard for an invitation to one of the country’s most prestigious All-American games?

You do? Well, good news. I’ve got a way for you to do just that. The first step? Head to this website right here.

The second step? Pick defensive end Noah Potter and offensive lineman Ryan Jacoby when you get to their names. It’s that easy!

Lest you think this is just some ballot-box stuffing and these nominations aren’t deserved, I encourage you to watch Potter’s 2019 film. The 6-foot-5, 260-pound defensive lineman has really blossomed in his senior year for the Cardinal, turning himself into one of the country’s best pass rushing prospects.

Potter hopes to be the next Buckeyes great to don No. 97. He and Jacoby are a major reason why Mentor is a leading contender to win an Ohio Division 1 football state championship this year. The Cardinal are 9-1 and currently sit as the state’s second-ranked team.

Finishing up, let’s go back to Athens, Ga. and talk about another big-time decommitment suffered by the Georgia Bulldogs. This time, it was 5-star running back prospect John Emery who reopened his recruitment and left Georgia’s fourth-ranked recruiting class.

To be clear, this departure is not in any way related to others Georgia has endured. Emery, like 5-star receiver Jadon Haselwood, wasn’t forced out of the Georgia class, which might make it tougher for to handle. There is a chance this decommitment trickles down to Ohio State a bit, though.

The Buckeyes are currently chasing another running back for 2019, and IMG Academy (Bradenton, Fla.) 4-star tailback Noah Cain is one of them. Cain has an official visit set to Ohio State for Nov. 24 but has been leaning toward LSU, according to sources in Louisiana. Emery, I’ve been told, seems to be leaning toward the Tigers as well since he’s a Louisiana native and resident, and the Bulldogs were recruiting Cain very hard prior to Emery’s commitment.

You see what I’m getting at, right? It’s now pretty likely that Georgia once again turns up the heat on Cain, who is going to make a decision on Dec. 21. LSU already has 4-star running back Tyrion Davis committed, so unless they push him out it’s unlikely Cain and Emery both end up at LSU.

Of course, all this could be moot if the Buckeyes are able to flip running back Marcus Crowley, a Miami commitment that will make his official visit to Ohio State this weekend. An early decision from Crowley is the preferred outcome for the Buckeyes, I believe.

Ohio State sales pitch to Wandale Robinson may not be what matters to him
Which committed prospects will Ohio State actively try to flip?
Advertisement
Advertisement