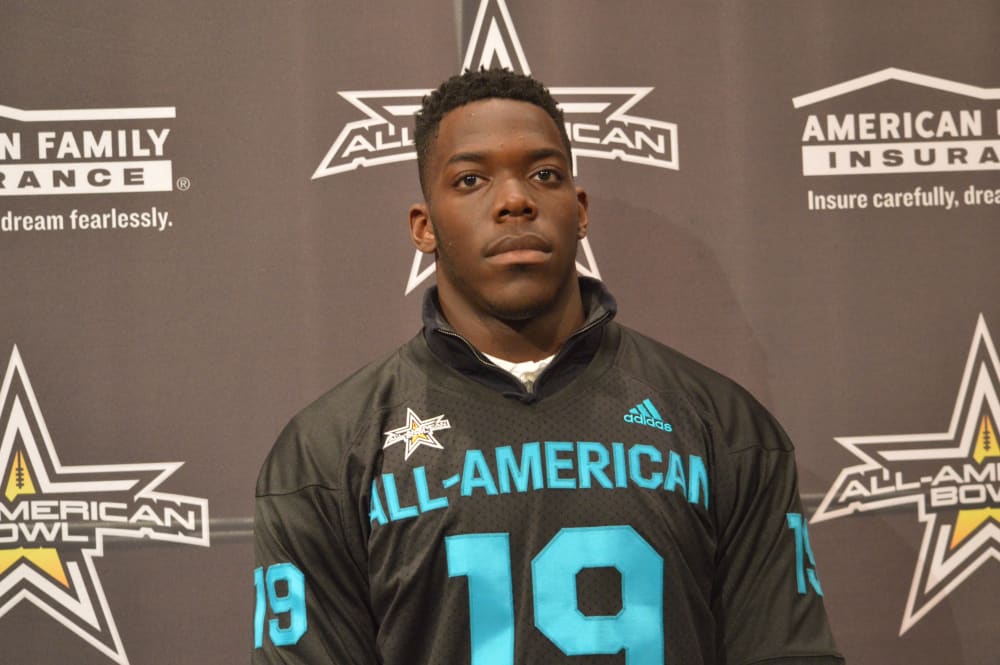 Ohio State is hoping to find a way back into the lead for Zach Harrison. (Nick Clarkson/Lettermen Row)

Stay in touch or be left out because Ohio State recruiting is a 24-hour, seven-day-per-week obsession. What’s the latest news as the Buckeyes build for the future? Get that and more Sunday through Thursday on Lettermen Row, including today’s discussion about Urban Meyer’s health issues and how Ohio State finds itself in a no-win situation.

On Monday, Urban Meyer told the media throng gathered for his weekly press conference that he absolutely intended to return to Ohio State as its coach next season — and presumably beyond that.

On Tuesday, Meyer addressed Lettermen Row and a couple other local writers and went into detail with them about his arachnoid cyst. It’s a condition he’s dealt with for 20 years but has again been brought into the spotlight as severe headaches and “intense pain” have increased recently, including an episode during the game against Indiana that brought him to his knees on the sideline. The discomfort has been noticeable on his face during games and media opportunities, and as the Buckeyes on-field production has waned, it’s created speculation about if there’s a connection between the two things. That, ultimately, leads to rumors about whether Meyer is considering stepping away from the game to focus on his health.

During that Tuesday meeting, Meyer said what he felt he needed to say, and a good reason for that is recruiting. It’s hard right now for the Buckeyes to talk to recruits because no matter what Meyer says or does, there’s a current washing away his words and leaving only the memories of what happened nine years ago at Florida.

Meyer wants desperately to undercut that point and to reiterate to anyone who will listen that his intention is to return to Ohio State.

“This is just a matter of fact,” Meyer said. “This is about the truth, avoiding speculation. When I get those questions: Why do you look like that? Why are you hurting? What’s that pain on your face? I’m fine, guys.

“I’m just managing my way through it and we’re working hard.”

The buzz about his health and its lasting impact on him isn’t going away, though, no matter what he reveals publicly. There’s a portion of the national media and obviously a number of opposing programs already spreading the message that he’s not coming back regardless of the public comments.

So how does Ohio State really combat that? Meyer’s intention is to return to Ohio State, and if he can’t for whatever reason, it will be because he’s been dragged away from it.

“I put my life into this job,” he said. “I love Ohio State. I grew up a Buckeye. I am 100-percent committed to putting our players in the best possible position to win games and doing right by Ohio State. Nothing about my commitment to Ohio State has changed in any way — this is only a medical issue.”

But it also creates a recruiting issue, and it’s something Ohio State had to address. Even during the Zach Smith situation over the summer, the Buckeyes lost just one commitment. But this feels bigger and more serious. Meyer’s health is a big deal, and it’s a situation where the young men who have committed to him need to ask themselves if they take him at his word. And if they don’t, they likely shouldn’t have committed in the first place.

I don’t know what the eventual outcome here is, but I believe that if Urban Meyer and his family worry that his long-term health is at stake, it’s in his best interest to hang up his whistle. I have zero doubt that isn’t what he wants to do, and it’s certainly not what recruits are being told by anyone inside of the Ohio State program.

Ohio’s top-ranked 2019 prospect, 5-star defensive end Zach Harrison, received his All-American jersey today at a presentation at his high school. The usually reserved Harrison was, predictably, just that in accepting the honor.

Congratulations to @Zacharrison88! On behalf of the OSL team and Orange community, we’re incredibly proud of the foundation you’ve built. Your character and class is something special. Keep doing you Zach. Lewis Center will always be behind you! @19AllAmerican pic.twitter.com/8lqRikX1P4

Lettermen Row was in attendance and spent some time talking with Harrison following the awarding of his jersey. He doesn’t say much, as expected, but we appreciate the time with the country’s No. 5-ranked overall prospect in 2019.

Harrison plans to visit Ohio State for the Buckeyes game against Nebraska on Saturday, and there’s a chance he will return on Nov. 24 against Michigan. Harrison updates his recruitment with some of the media there, including a lot of talk about Michigan from a writer from a Michigan site, his health and the Orange playoff run in the video below.  Check it out.

We’re less than 24 hours away from a college decision for Frankfort (Ky.) Western Hills 4-star athlete Wandale Robinson. The talented and versatile Robinson, who visited Ohio State twice in the last two months, is making his announcement on Thursday afternoon from his high school. He will choose from a final group of schools that include Kentucky, Ohio State and Nebraska.

The Buckeyes came from way behind in this recruitment to get to this point, and it’s absolutely a testament to the work done on the field and off by interim receivers coach Brian Hartline. Hartline made sure Robinson knew from the day he took over his new post that the 5-foot-8, 170-pound star was going to be a priority for him and left no doubt about his sincerity through his efforts.

Still, I believe it will still leave Ohio State as the runner-up here, because it seems that Robinson is more likely to pick Nebraska as decision day looms.

Scott Frost and the Cornhuskers were there before Robinson blew up nationally, building a relationship with him when schools like Ohio State and Alabama were inconsistent. That regularity pays off in recruiting.

Ohio State has a number of advantages over Nebraska, but as we’ve said here over and over in the past, recruiting is about relationships. Even with the work done by Hartline, I don’t think it’s ultimately going to be enough for the Buckeyes.

Garrett Wilson will be at Ohio State this weekend

Ohio State has a big recruiting weekend coming up, and not just because the aforementioned Zach Harrison is expected at Ohio Stadium on Saturday.

I’ll be in Columbus this weekend for the Blackout. #GoBucks

There is another 5-star 2019 prospect, Ohio State commit Garrett Wilson, coming to town as well. Ohio State’s highest-rated recruit is coming to town a few weeks earlier than expected to chew bubblegum and help recruit for his future college.

And he’s all out of bubblegum.

“Class of 2020 recruiting is big this weekend,” Wilson told Lettermen Row. “Julian Fleming and Jaxon Smith-Njigba will be there.”

Lettermen Row told you last week that Fleming, the country’s top-ranked 2020 wide receiver, was likely to visit Ohio State twice in November. He confirmed that trip with us on Monday night and will make the visit with a handful of his teammates. Smith-Njigba is a 4-star prospect in the 2020 class, and he’s become a big-time target for Brian Hartline and Ohio State since his mid-September offer.

As for Wilson, he isn’t sure yet if he’ll be able to return to Ohio State for the big game against Michigan.

“I’m trying, but might be tough,” he said. “It’s the second round of our playoffs and we might play on a Saturday, so I have to wait for details.”