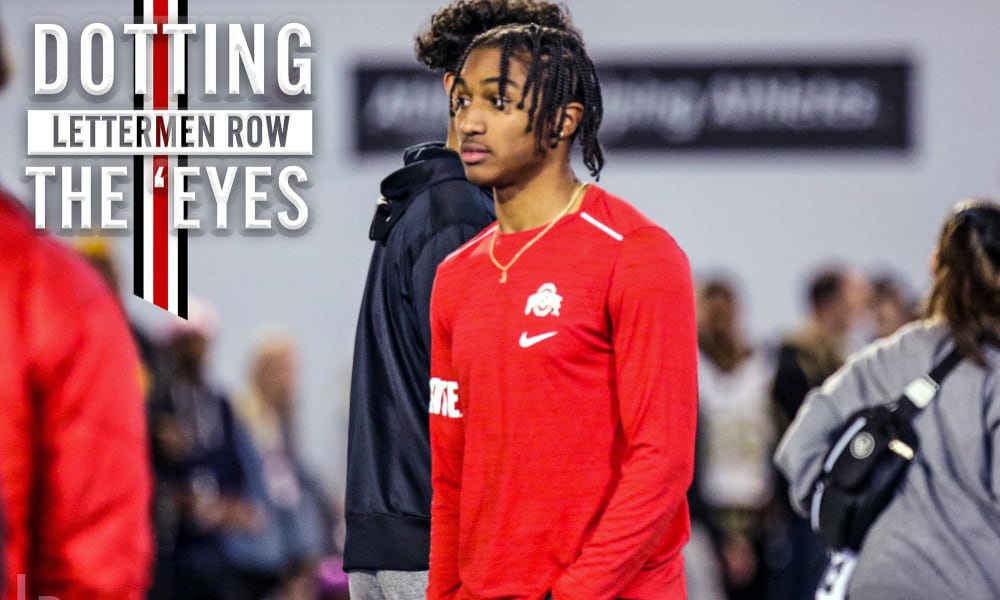 Ohio State is in a good position to once again land Lejond Cavazos. (Birm/Lettermen Row)

Stay in touch or be left out because Ohio State recruiting is a 24-hour, seven-day-per-week obsession. What’s the latest news as the Buckeyes build for the future? Get that and more Sunday through Thursday on Lettermen Row. Today’s update checks in on a handful of players that visited during a major recruiting weekend for Ohio State.

Trying to get a read on Lejond Cavazos and Ohio State

One of the weekend’s most intriguing visitors to Columbus this weekend was former Buckeyes commitment Lejond Cavazos. The 6-foot-1, 190-pound cornerback safety prospect — being recruited by Ohio State as a cornerback — was in town Friday through Sunday and if you watched him during Saturday’s practice, you saw a young man that was very comfortable among the Buckeyes football team.

Cavazos rarely had, or needed, an Ohio State escort, choosing to spend his time moving from one Buckeyes recruiting target to another but primarily spending his time with the country’s top-ranked receiver, Julian Fleming.

RELATED: JULIAN FLEMING BEGINNING TO GET ‘AT HOME’ FEEL AT OHIO STATE

If you didn’t know that Cavazos had decommitted from Ohio State in December, you’d have sworn that the 4-star prospect was in town recruiting for, rather than being recruited by, the Buckeyes right now.

But as for now, the IMG Academy (Bradenton, Fla.) standout remains uncommitted. He visited LSU earlier this week and the plan for he and his father was to return home following the Buckeyes visit and try to sort out whether or not they are ready — again — to put his own recruitment behind him. There’s no doubt that Ohio State made a major impression with the family and it seems Ryan Day has managed to show them that the relationship Urban Meyer had with them wasn’t the only reason Buckeyes are being considered here.

Cavazos was set to return home Sunday night and I wouldn’t be surprised if there’s a decision made on whether or not to end his recruitment within the next week or so. If that happens, I think Ohio State is in very good shape to land Cavazos…again.

Ohio State gets unexpected — and huge — visit from Drake Maye

You can thank a fortunate NCAA tournament draw for the Buckeyes football program getting a key, unexpected visit from a player that is right at the top of their 2021 quarterback recruiting board, Drake Maye. The 6-foot-4, 202-pound quarterback is, as we’ve written here before, the younger brother of North Carolina basketball star Luke Maye, and with the Tar Heels in town for the first two rounds of the big dance, the entire family — including Luke — visited with the Buckeyes.

Drake told Lettermen Row two weeks ago he was “hoping” to get back to Ohio State this spring but had been unable to figure out a date. Sometimes things just work out.

“Very convenient and it worked out perfectly,” Maye said Sunday of this visit. “The practice had an unbelievable atmosphere and getting to know the coaches better was unreal.”

The Buckeyes are still sorting their options at quarterback in 2021 but Maye is absolutely one of the priorities. He’s been in regular contact with Ryan Day and Mike Yurcich and Corey Dennis for months. He spent the majority of his time on campus with that trio.

“A ton of time, multiple times Saturday and Friday,” he said when asked about how much he saw the Buckeyes quarterback braintrust. “All of them are outstanding and very successful.”

The key word there may be “successful.” Though Maye is a North Carolina legacy — his dad played football there and of course his brother is there — he’s also a young man from a family that eats, sleeps and breathes winning. Another Maye brother, Cole, is a baseball player at Florida, where he’s won a national championship just as Luke has at North Carolina. That desire to win championships is one reason that Drake Maye says the Buckeyes are at the top of his list of schools right now.

“I’ve always thought highly of Ohio State and honestly would say they’re at the top of my list right now,” Maye said. “I’m looking for the best fit for me.”

J.J. McCarthy continues to be a major Ohio State target for 2021

Staying with the 2021 quarterbacks, one of the guys that was expected in Columbus this weekend was J.J. McCarthy. The Nazareth Academy (La Grange, Ill.) prospect has 25 early offers but has been very clear that he’s got major interest in the Buckeyes.

“It was surreal,” McCarthy said of this weekend’s visit. “Actually sitting down with Coach Day and having dinner with him, sitting in the quarterback meetings as well as watching practice.

“Coach Day and Coach Yurcich are both very passionate and they know their stuff. Plus, they are both great guys. I didn’t really see any change in Day (since becoming head coach). He’s an awesome coach, father, and an awesome human being.

McCarthy spent a lot of time with a handful of young receivers and the Buckeyes lone 2021 commitment, Jack Sawyer.

“It was super important,” he said of the time with his 2021 peers. “I’ve spent time with Jack Sawyer and Lorenzo Styles and we’ve really hit it off. I’ve also made good friends with Beaux Collins and Emeka Egbuka.”

Ohio State is at the top of the list for McCarthy like they are for Drake Maye but McCarthy’s interest isn’t going to force him to hurry into a decision.

“Develop a good relationship with Coach Day and see what other schools are interested,” he said when asked what’s next for his recruitment. “But I can see myself playing at Ohio State.”

Did the Buckeyes make a move for Michael Carmody?

About a month ago, Ohio State offered Mars (Pa.) 2020 offensive tackle Michael Carmody, much to the surprise of the country’s 12th-ranked offensive tackle. On Saturday, he was in Columbus checking out the Buckeyes again and felt something much different than he had in previous trips to Ohio State.

“It was fantastic,” Carmody told Lettermen Row about the visit. “It felt really special there today. The Real Life Wednesday program is something I’ve never seen anywhere else, and for me and my family that’s a pretty special thing because football doesn’t last forever. Eventually, I will need to find a real job.”

Carmody spent time with Ryan Day for the first time and came away impressed but also continues to grow his relationship offensive line coach Greg Studrawa. He said he’s already planning another visit to see more of what the school has to offer.

“I spent most of the day with Stud, and got to meet personally with Coach Day,” he said. “This visit being so good probably just means we are going to be back a bunch more to learn more about academics, and spend time with the coaches. I’m thinking about official visits this summer and hopefully making a decision before football starts.

“I don’t really have a list of top schools or anything, but Ohio State has definitely become a school I’m going to take a closer look into.”