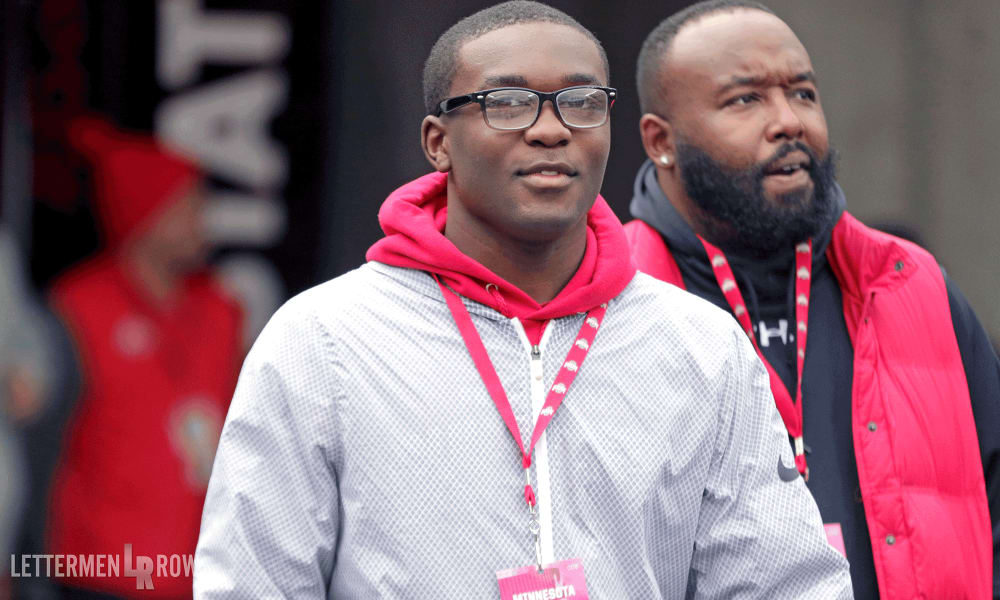 Ohio State was a big visit for 2021 running back Jaylan Anderson. (Birm/Lettermen Row)

Stay in touch or be left out because Ohio State recruiting is a 24-hour, seven-day-per-week obsession. What’s the latest news as the Buckeyes build for the future? Get that and more Sunday through Thursday on Lettermen Row, including today’s updates on an Ohio tight end who recently visited the Buckeyes and more.

Another tight end to watch for Ohio State?

Tyler Foster, a 6-foot-5, 225-pound 3-star prospect at Pickerington (Ohio) North High School who is currently committed to Ohio University has now checked in with the Buckeyes. Foster, the country’s 78th-ranked tight end, is a player that the Buckeyes have seen in person a few times over the last year, including at camps this past summer. He was at Ohio State for camp on June 8 and was arguably the best prospect in attendance at the position.

His most recent visit is a culmination of increased communication between him and the Buckeyes in recent weeks. There’s no doubt that right now Foster is committed to Ohio and looking forward to heading there, but when a program like Ohio State is around, it’s hard to not take a look.

“I’m definitely a verbal commit to OU,” Foster told Lettermen Row. “I feel uneasy about what the perception might be, but I was excited to see what a game day would offer at Ohio State.”

That experience was memorable and another step toward what could eventually turn into a scholarship offer from the Buckeyes.

“[The visit] went well,” he said. “It was great to get to campus for a game. I met with [Urban] Meyer, [tight ends coach Kevin] Wilson and [co-defensive coordinator Alex] Grinch before the game. I met again with Coach Wilson and Coach Grinch after the game in the locker room. They said they would be in contact soon. Their message was that they are very impressed with my film and size in person.”

Foster has 22 scholarship offers to his credit and isn’t looking around for a new option. He’s happy with the Bobcats and sees a bright future there — but this is Ohio State, and it’s worth a look.

“I’ve been hearing from Coach Grinch for a few weeks,” he said. “They said [Saturday] was definitely a very positive step in the right direction as far as an offer goes. They said they would be in contact soon.”

The recent contact between Ohio State and Perry High School’s Jaylen Anderson came to a head last weekend as the very talented 2021 running back made his first trip to Ohio State.

“It was amazing,” Anderson told Lettermen Row. “It just made me fall in love with the school so much more.”

Anderson is still waiting on his first offer, but Ohio State has set a high bar for what he expects on college visits.

“Just the atmosphere and being there was awesome,” Anderson said. “Walking down the tunnel was amazing.”

The 6-foot-1, 210-pound Anderson missed four games this season with a minor knee injury, and that was the primary subject of his brief interaction with Ohio State running backs coach Tony Alford on Saturday.

“I got a little time with Alford,” he said. “He asked me how I was doing, how my knee was doing, and he wanted me to come back for another game.”

Anderson has the potential to be a top-tier running back in the region and is a player Ohio State fans should continue to monitor over the next two recruiting cycles.

Ohio State has seen a couple of in-state quarterbacks in the Class of  2022 in the last few weeks, welcoming in Centerville’s Chase Harrison and Franklin Height’s Jeff Beverly. Last weekend against Minnesota, the Buckeyes went one state west and had Indiana’s Brady Allen in for a visit. Allen is the starting quarterback for Gibson Southern High School in Fort Branch.

The 6-foot-5, 185-pound freshman has an offer from his home-state Hoosiers already. He received a warm welcome from Ryan Day and graduate assistant Corey Dennis and looks like a player that could be a national recruit down the road. As a freshman, Allen has thrown for just under 1,094 yards and tossed 21 touchdowns against three interceptions while completing almost 57 percent of his attempts.

It’s that time of the year when the majority of high school stars are gearing up for a playoff run, but unfortunately a pair of Ohio State commits will not be doing that. Instead, 2020 quarterback Jack Miller and cornerback Lejond Cavazos are trying to get healthy.

In the case of Cavazos, he will miss the remainder of his junior season.

It’s been a great season but I will not be finishing this season due to an injury… I will be alongside my brothers for the rest of the ride and blessed to be apart of this great team.

The 4-star defensive back at the IMG Academy sustained a lower-body injury that will cost him a few months of playing time — but fortunately requires no surgery. Initial reports were considered much more serious, so he may have caught a break.

On the other hand, Jack Miller suffered a knee injury that will keep him out at least three weeks, according to AZCentral.com.

Miller has been spectacular this season for Chapparal High School. He’s thrown for more than 2,400 yards and 27 scores against six interceptions.

Senior Tackle: Cade Stover gets huge win, spends weekend with Buckeyes
Ohio State recruiting: Who are in-state targets Buckeyes must get in 2020?
Advertisement