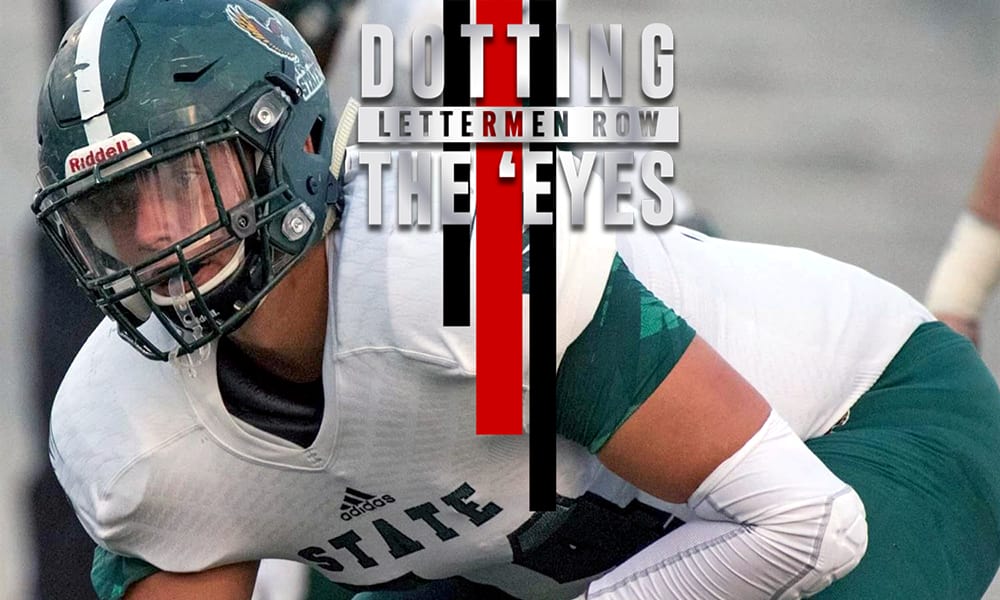 Stay in touch or be left out because Ohio State recruiting is a 24-hour, seven-day-per-week obsession. What’s the latest news as the Buckeyes build for the future? Get that and more Sunday through Thursday on Lettermen Row. Today we’re talking about offensive line targets Turner Corcoran and a new receiver from Washington who will visit Ohio State this spring.

The 4-star offensive tackle, the top-ranked prospect in the state of Kansas, has been focusing on seven schools since August — and the Buckeyes have remained close since his first visit to the school last June. Corcoran’s first impression of the Ohio State program has stuck with him as he has navigated through the last few months of his recruitment, even if much has changed inside of the Woody Hayes Athletic Center.

Though there’s been a handful of changes, Corcoran is glad there’s been continuity on the offensive coaching staff.

“I kind of like it,” Corcoran told Lettermen Row. “I know they’re keeping the same staff that helped lead the offense to a top-five offense in the country. They grabbed some nice defensive coaches in my mind, simply because those coaches helped make their teams into being some of the best defenses in America.”

The biggest change for Corcoran since our last update on him in November is, of course, the transition from Urban Meyer to Ryan Day.

“I’ve stayed in contact with them quite a bit since Meyer retired,” the country’s sixth-ranked offensive tackle said. “I  talked with [Ryan] Day on Sunday and [Buckeyes tight ends] Coach [Kevin] Wilson is coming out to see me on Wednesday. [Offensive line] Coach [Greg] Studrawa said he wasn’t able to make it out here this time, so he is sending Coach Wilson.”

Ohio State’s recruiting efforts with Corcoran have been kind of peer-led from the beginning. Paris Johnson and Luke Wypler remain heavily involved in trying to land Corcoran for the Buckeyes. He hopes to see them again this spring in Columbus.

“I talk with Paris and Luke all the time,” he said. “They help with the recruiting for Ohio State, that’s for sure. I’m working with my family for us to get up to Columbus for the spring game weekend.”

Ohio State will get visit from 2021 Washington receiver

Brian Hartline has already made a big impression on receiver Gee Scott, the Buckeyes 2020 commitment from Sammamish (Wash.) Eastside Catholic. But Ohio State may not be done in the Pacific Northwest.

Steilacoom (Wash.) High School’s Emeka Egbuka is a top-40 prospect early in the Class of 2021 and a major fan of the Buckeyes. Hartline stopped in at Steilacoom on Monday to make sure the 6-foot-1, 190-pound athlete knows he has Ohio State’s attention as well.

“Coach Hartline wanted to put a face to the name,” Egbuka told Lettermen Row. “I’m really interested in Ohio State. They are a historic program and develop receivers well. I’ve also had a good talk with Coach Hartline and he said some things that were really good for me to hear.

“He’s told me that he loves my film and that I would fit in well there at Ohio State.”

A two-sport star at Steilacoom, Egbuka plans to visit Ohio State for the first time this spring before baseball season kicks in.

New Ohio State quarterbacks coach Mike Yurcich was in Arizona on Monday. And after stopping by Saguaro High School in Scottsdale to see 5-star cornerback Kelee Ringo, he made his way across the Valley and extended another 2020 offer to offensive lineman Tosh Baker at Pinnacle High School in Phoenix.

After a great phone call with @Coach_Yurcich I’m blessed to say I’ve received an offer from The Ohio State University!! pic.twitter.com/rFIapMWVzU

A 6-foot-8, 260-pound two-sport athlete, the basketball star has also recently added an offer from Alabama and already holds a scholarship opportunities with Oklahoma, Notre Dame, Oregon and Michigan, among others.

Baker is the 21st offensive tackle to be offered by Ohio State in the Class of 2020, a clear sign of the position’s importance in the next recruiting cycle.

Speaking of 2020 offensive lineman, one of Ohio’s best may be closing in on a commitment — and the Buckeyes haven’t yet offered.

“I am swaying back and forth,” LeRoux said. “However, my process is not going to be much longer. I’m still trying to figure out when my choice will be made. Who that will be is still a question, but I’m assuming not for long.”

Purdue is the team most likely to land the 6-foot-8, 320-pound lineman. But Ohio State, Michigan and a few other programs keep coming around. The Buckeyes stopped in to see him last week, and Ed Warinner checked in on behalf of the Wolverines on Monday morning.

“Michigan, Purdue, Wisconsin, Michigan State, Ohio State, Pitt, Kentucky and a few more,” LeRoux said. “I believe they know that I’m close to deciding, which is why they’ve visited my school as soon as possible. Three schools came in first thing Monday morning.”

Ohio State has two offensive linemen committed in 2020 and is still trying to land at least two more in the Class of 2019, so it’s hard to say exactly what number it will be trying to add next year. LeRoux is a talented player who could get a real look down the road, so an early decision isn’t ideal for the Buckeyes.