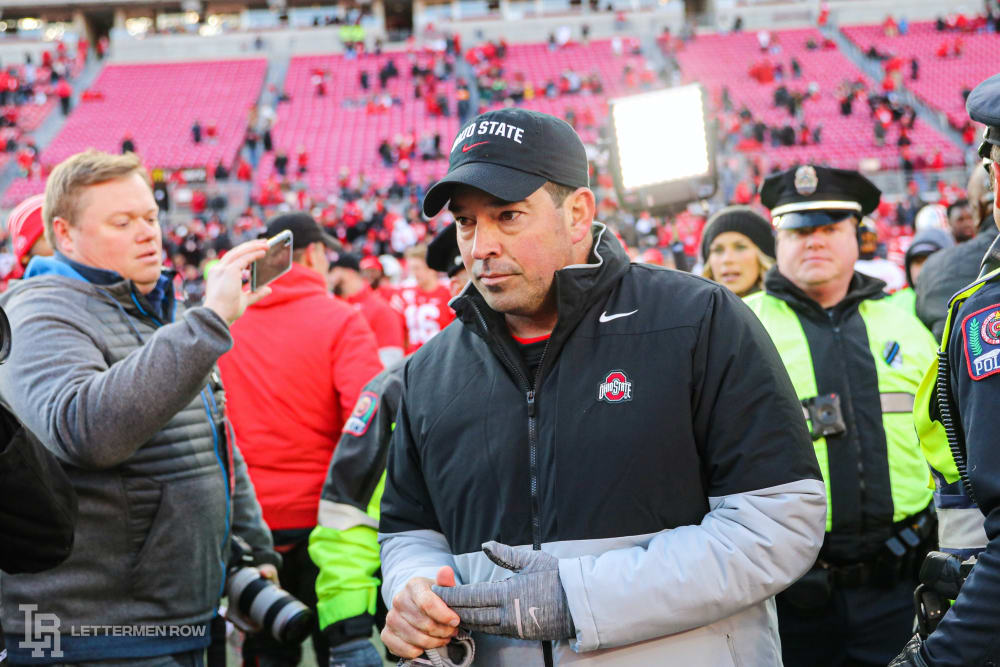 Ryan Day and his coaching staff has been stuck in wait and see mode about recruiting visits for months on end. (Birm/Lettermen Row)

Numerous times, coaches and players began to prepare for a conclusion. Numerous times they were disappointed when one failed to materialize. That cycle of frustration has led to each tier of college football’s recruiting tree feeling out of the loop about what is next.

Yes, even those like Ryan Day, positioned near the very top.

“We’re waiting to find out and get some direction on what to do,” Day said. “Then at that point, we’ll kind of go from here. It’s kind of like hurry up and wait.”

The wait could be almost over — really. There is major momentum suggesting the dead period finally wrapping up at the end of May. That means the next six weeks are likely to remain calm for Ohio State, but they’ll be instrumental in setting up a very important summer.

What are the key items for the Buckeyes to accomplish throughout April?  Lettermen Row is taking a look at that very topic.

This is probably a bit of a no-brainer, but it needs to be said anyway. After months of will-it-or-won’t-it conversations, a final answer is needed about the dead period one way or another.

Getting that answer is a big deal for every college program, but it could be more important for Ohio State than most. The Buckeyes are in a holding pattern with 5-star 2021 defensive lineman J.T. Tuimoloau, waiting more than a year for his chance to visit Columbus. The fact that he and his family have continued to be patient waiting for that visit is a good thing. But at some point it just has to happen.

There have been dates discussed between Tuimoloau and Ohio State. Those discussions will not turn into real plans until the NCAA makes an actual announcement. For Ohio State, Alabama, Oregon, USC and Washington, wrapping up the 2021 class is more important right now than anything else. Tuimoloau is the type of player who will make an impact as a freshman no matter where he ends up.

His family and the schools recruiting him need to have a real chance to make an informed decision.

Can Buckeyes get visit from Kiyaunta Goodwin on books?

Outside of an answer from Tuimoloau, there’s arguably no bigger target in any class for Ohio State right now than Kiyaunta Goodwin. The massive offensive tackle from the Louisville (Ky.) area has been a top player on the Buckeyes board for the last year. Goodwin is a prime example of a prospect who has lost confidence in the NCAA ending the dead period, and it could lead to some changes to his personal recruiting timeline. His trainer and guardian, Chris Vaughn, explained the situation to Lettermen Row last week.

And those visits must happen for Goodwin to make a choice. The problem for Ohio State is that the 6-foot-8, 310-pound lineman isn’t sure he’ll wait until June.

“He got his hopes up a couple times before and been disappointed on it,” Vaughn said. “He doesn’t want to make any plans that can still get shot down.”

And so the Buckeyes are left waiting, hoping they can convince Goodwin not to jump into a commitment with Kentucky, a program he’s visited multiple times. There is confidence that J.T. Tuimoloau will wait as long as he needs to make a decision, but it’s not quite cut-and-dried that Goodwin will do the same.

The sooner that Ohio State can actually lock in a visit date that Goodwin can feel secure in, the sooner the Buckeyes odds in this pivotal recruitment starting going back up. After losing out on big-time offensive tackle prospects in the 2021 class, Kiyaunta Goodwin is very important in the Class of 2022.

The Buckeyes didn’t start their top-ranked 2022 recruiting class until April of last year, and they could use a similar boost this April.

It’s not a big deal to have a recruiting class start later — especially considering the current visit restrictions. But with the promise of a return to normalcy this summer, getting an early commitment would be helpful. There are a handful of in-state prospects who could become real spark plugs for Ryan Day and Ohio State.

With four in-state offers out in the Class of 2023 (Luke Montgomery, Josh Padilla, Brenan Vernon and Sonny Styles), the potential for a true foundation in that class exists. The challenge is going to be finding a player who wants to be that guy in the upcoming class even though visits and contact are limited right now. Peer-to-peer recruiting has become a major part of the Buckeyes success, and getting someone to take up the mantle of Captain Buckeye in 2023 like Jack Sawyer did in 2021 and C.J. Hicks has done in 2022 is vital.

Looking for an out-of-state sleeper? That could be cornerback A.J. Harris. It won’t be easy to lure him out of the south, but he wants to commit early and the Buckeyes are making him a priority right now. April may be too soon to look for a commitment from him, but stranger things have happened.