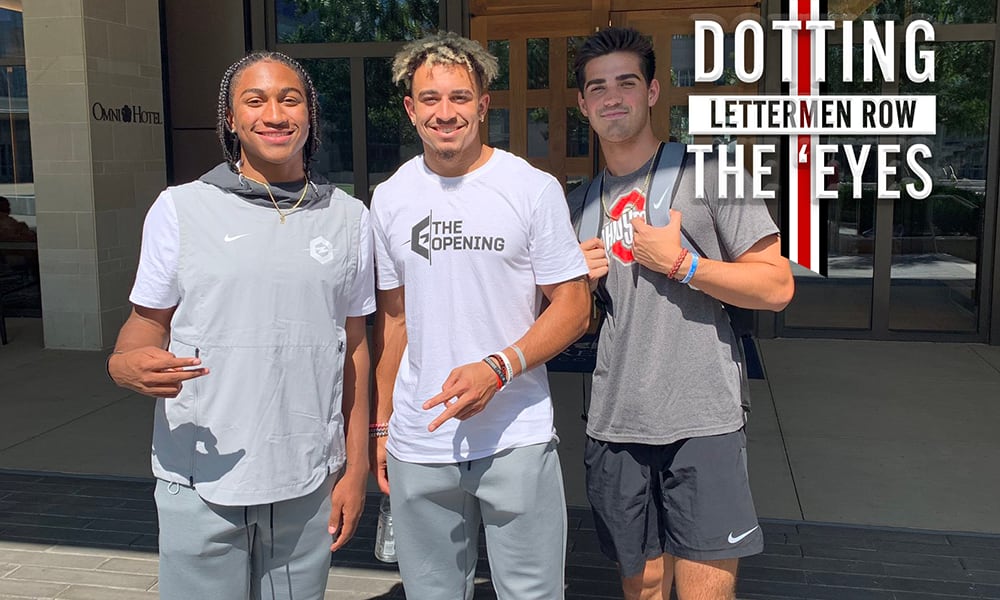 Stay in touch or be left out because Ohio State recruiting is a 24-hour, seven-day-per-week obsession. What’s the latest news as the Buckeyes build for the future? Get that and more Sunday through Thursday on Lettermen Row. Today’s notebook talks with latest Ohio State commitment Cody Simon and looks ahead at what could be an absolutely huge month of July for the Buckeyes.

Cody Simon finds everything he needs at Ohio State

After committing to Ohio State on Saturday afternoon, 4-star linebacker Cody Simon still wasn’t really sure why he felt the need to pick the Buckeyes.

But all that matters for Jeff Hafley and the Scarlet and Gray is that he did.

“I really don’t know,” Simon told Lettermen Row about the timing of his decision. “I knew where I wanted to go, but these past few days I just felt that it was the best place for me.”

The actual conversation between the country’s 10th-ranked outside linebacker and the Ohio State coaches came on Friday night. It was a call that the Buckeyes coaches had been hoping for after a whirlwind, three-month-long recruitment.

“They were extremely excited and had lots of energy (when he committed),” Simon said. “I’m not sure if they knew it was coming, but they were happy anyway.”

He may not know why he pulled the trigger when he did — there had never been a specific timeline for a choice — but Simon did not hesitate to say why he committed to Ohio State.

“They really have everything I’m looking for in a school,” he said, breaking down his top picks that included Penn State, Nebraska and Ohio State. “For all three schools, I felt that they were great choices, so just talking to the players and coaches just made me feel more at home there.

“Going into the (official) visit we were concerned, about (Ohio State’s academic reputation), but after going through the academic side and the life after football side, the education there really is strong.”

With his own recruitment behind him, Simon is ready to focus on his senior season at Jersey City (N.J.) St. Peter’s Prep. That said, he’ll contribute to the cause of recruiting for the Buckeyes when he’s asked to.

“If there is a guy who I feel can really help us, I would do my best to reach out to him and see what he’s thinking,” Simon added about the idea of acting as a recruiter. “As of right now though, I just want to enjoy it.”

Ohio State recruits at The Opening…

After making his announcement on Saturday, Simon hopped on a plane and headed to Frisco, Texas where he and another 150 or so of the country’s top high school football players were set to compete in The Opening, held at The Star, the practice home of the Dallas Cowboys.

The Buckeyes have 15 commitments and the Big Ten’s top-ranked class but these next few days are going to be absolutely pivotal for Ohio State and the way its 2020 class finishes.

Miller, who has chosen to sit out the final events of the Elite 11 Finals to rest a strained back muscle, will use his time in Texas to recruit almost exclusively from here and the Buckeyes are hoping for good news on the heels of the efforts made by him, Cavazos, Paris Johnson and others. According to the always-outspoken cornerback Cavazos, things are already going well.

So exactly what’s coming for the Buckeyes? There are a few things in the works.

Here are the players in the Class of 2020 that we know are going to commit somewhere in the next few weeks, at least according to the players themselves.

These prospects are all expected to make a college decision in July as well, though no specific date for their announcement has been given.

If all eight of those players pick the Buckeyes and there is positive momentum with each, the Ohio State 2020 class would technically be at 23 verbals (considering kicker Jake Seibert as a grayshirt) heading into the first of August.

Ryan Day, Jeff Hafley, Mark Pantoni and the rest of the Buckeyes recruiting machine can get very specific in what they look for after.

I believe this class ends at 25 signees and after months of concern and consternation, things appear to be shaping up quite nicely for Ohio State.