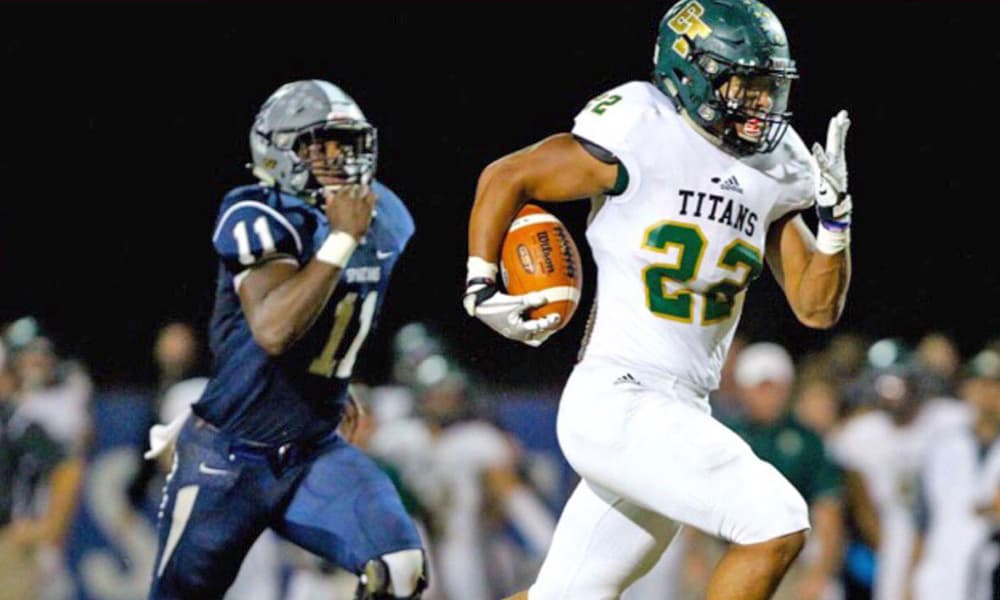 Stay in touch or be left out because Ohio State recruiting is a 24-hour, seven-day-per-week obsession. What’s the latest news as the Buckeyes build for the future? Get that and more Sunday through Thursday on Lettermen Row, including tonight’s updates on Ohio’s top prospect Jack Sawyer and Texas safety RJ Mickens.

One of Ohio State’s most intriguing 2019 commitments will return to Columbus for his official visit to the school next month.

“I will do take my official visit on Oct. 6,” Chambers said.

That’s good news for the Buckeyes, the program that Chambers committed to back in April. He’s had zero visits to any school that are publicly known since, but Chambers said last month he’s had a number of schools in contact with him since early August, when Urban Meyer’s administrative leave began at Ohio State.

“All the schools,” Chambers said. “A few have really been calling a lot, but most have reached at to let me know they are here if I open up my recruitment again.”

For the record, the 6-foot-2, 215-pound Chambers has no plans of doing that. He’s not interested in the rumors that swirl about him or any other recruits.

“I stay off social media,” he said. “I’m committed to Ohio State.”

The 3-star 2020 prospect who was offered by Ohio State in June will return for his fourth Buckeyes visit since June when he heads to Ohio Stadium this weekend. It’s already Washington’s second game-day visit to Ohio State this season.

“I’m heading down on Saturday, about 7:30 a.m.” Washington told Lettermen Row. “It’s going to be really cool to sit down and talk with Urban Meyer.”

Meyer’s presence is the primary reason the 6-foot-4, 200-pound receiver is heading back for another visit. He recently visited Michigan, which has also offered, but the Buckeyes still appear to lead the pack in his recruitment.

The Buckeyes would love to land Frankfort (Ky.) Western Hills 2019 wide receiver prospect Wandale Robinson and are hoping to get him back on campus for an official visit in the near future. On Wednesday night, Ohio State offered another Kentucky star, Danville’s Landen Bartleson, a 4-star athlete in the Class of 2020.

Blessed and honored to receive an offer from The Ohio State University! ‼️💰 🌰#GoBucks pic.twitter.com/fGWIvKYBcX

The offer to Bartleson, who primarily plays running back for Boyle County High School, is his sixth. Ohio State joins Kentucky, Tennessee, Purdue, Louisville and Colorado as early scholarships for the 6-foot-1, 182-pound tailback.

He’s currently ranked as Kentucky’s fourth-best 2020 prospect and the nation’s 36th-ranked tailback. He also won the 100-meter dash as a freshman with a blistering 10.95 mark. Ohio State has one commitment at running back already in 2020 and a host of offers out to the cream of the crop around the country. So like Wandale Robinson, he could be a player that they consider on the offensive side of the ball in a slot receiver position.

He also plays defensive back and some schools have projected him in the secondary.

On Wednesday night, Lettermen Row had a chance to chat a bit with Zinter about the offer and what it means to him to earn one from the Buckeyes.

“Since Sept. 1, I have been communicating quite frequently [with Ohio State],” Zinter said. “Throughout the last few weeks, I’ve talked with Ryan Day, Mark Pantoni and then Coach Meyer when he gave me the offer.”

The 6-foot-6, 300-pound Zinter earned an Ohio State offer the hard way, especially for an offensive lineman — without a camp visit to the school.

“Coach Meyer did say he usually only offers once a recruit has been out on campus,” Zinter said. “They were highly impressed with what they’ve seen on my film and what they think I can offer Ohio State.”

Zinter recently visited Notre Dame, and he’s not planning to be in Columbus at least until next spring. He does have some family ties to the Buckeyes, though.

“My grandma is from Ohio and is an alumni,” he said. “Ohio State is a great college with an incredible football program with top coaches. I haven’t been to the school yet, I’m hoping to visit in the spring.”