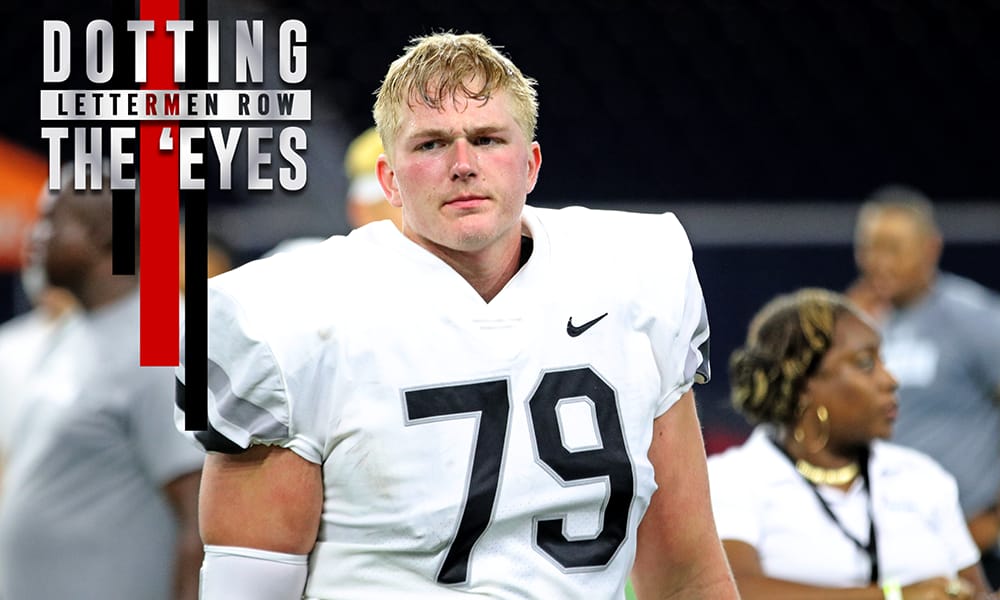 Harry Miller had a good week in San Antonio and is now ready to focus on Ohio State. (Birm/Lettermen Row)

Stay in touch or be left out because Ohio State recruiting is a 24-hour, seven-day-per-week obsession. What’s the latest news as the Buckeyes build for the future? Get that and more Sunday through Thursday on Lettermen Row. Today’s update touches on the reaction to Al Washington’s hiring and other recruiting news.

As we wrote on Monday night, there were a lot of rumors swirling that Al Washington, one of the country’s best young recruiters, was going to be following in the footsteps of new Ohio State defensive coordinator Greg Mattison and taking a job with the program.

Those rumors came to fruition on Tuesday morning when Washington was announced by Ohio State as the team’s new linebackers coach. There’s also reportedly a chance that Washington could take on the title of recruiting coordinator for the Buckeyes — befitting the reputation of a guy who proved to be one of Michigan’s best recruiters. Ryan Day spoke glowingly of Washington in a school release announcing the hire.

Day was a graduate assistant on the Boston College staff when Washington played for the Eagles, and he was the school’s offensive coordinator during Washington’s stint as running backs coach. So the two are very familiar. Washington is also very familiar with Ohio and Ohio State. His father played for Woody Hayes, and before playing at Boston College, Washington suited up for Bishop Watterson High School in Columbus.

In the last two seasons, Washington helped Cincinnati and Michigan score recruiting victories inside of Ohio. According to Ohio State signee Cade Stover, who will now play for Washington after Billy Davis officially announced he wouldn’t return to the Buckeyes, Washington was an effortless recruiter.

“He was just an overall good guy,” Stover said. “I liked him a lot when he recruited me. He had me thinking about going to Michigan a little bit.”

Jack Sawyer, a 5-star defensive end in the Class of 2021, is one of a handful of Columbus-area stars that Washington has been working on for the Wolverines.

“Coach Washington was the first coach to ever recruit back when he was at Cincinnati,” Sawyer told Lettermen Row. “It is very, very exciting to see all of those defensive-minded guys together.”

There will be a lot more reaction to come, but the instant analysis when it comes to Washington is simple: This is good news for the Buckeyes.

Harry Miller ready to get back to Ohio State

Harry Miller will return to Ohio State soon to spend more time with his future teammates, a handful of which he got closer to during the All-American Game week he just spent in San Antonio.

“I’m going up there on Martin Luther King weekend,” Miller told Lettermen Row. “It was a great week in San Antonio.”

In Texas, Miller spent a lot of time with and lined up next to Doug Nester, the 4-star offensive lineman from West Virginia he hopes to line up next to in college as well. In talking with Nester, who is still working through his feelings about Urban Meyer’s recent retirement and how it will ultimately impact his recruitment, Miller found more peace with his own decision to stick with the Buckeyes rather than signing with Stanford or the other schools chasing him.

As usual, Miller found an interesting perspective that helped him make his choice.

“I think a big reason for him needing to take his time is to evaluate the situation,” Miller said. “I don’t think he has as great a relationship with Coach Day as I have.

“This whole experience has been rather humbling. I committed to something that I thought was wrapped up and ready with a bow on top. But I saw the web untangle into doubt, and now it’s back and things are finally coming together stronger than before. It shows how little our plans matter in the scope of God’s plan. I’m very positive that these next years are going to be very special and God’s got a firm grip on it.”

Miller has advice for recruits that are hearing from schools trying to them flip them or undermine their initial instincts on the recruiting trail.

“I have lived by a saying: ‘They create the disease to sell the remedy,'” Miller said. “It’s always obvious that people hate Ohio State.”

As the news that Alex Grinch was leaving Ohio State hit the internet this past weekend, a 5-star cornerback from Texas lamented the fact that he’d not really been recruited by the Buckeyes.

It didn’t take long for Ohio State to get the memo. Shortly after that tweet, McGlothern heard from the Buckeyes.

“Coach Day and [receivers coach Brian] Hartline both reached out,” McGlothern told Lettermen Row. “They apologized for me not being recruited hard and said they don’t chase kids, so if I’m interested in them, they’re interested. They said they’re still trying to get their staff right, but also told me they didn’t take any cornerbacks in 2019 class.”

McGlothern has not visited Ohio State, but he plans to do that in the near future. He was impressed by each staff member he talked to thus far.

“Ryan Day has been learning from Urban Meyer,” he said. “From talking to him, you can tell he’s very excited and ready to take over. Hartline was very honest. I will visit there in the spring or the summer.”

So what about LSU’s Corey Raymond?

I don’t like to speculate and talk too much about rumors around the coaching staff, but it’s getting harder to not talk about LSU cornerbacks coach Corey Raymond.

One of the country’s elite recruiters and talent-developers in the secondary, Raymond’s named has been linked with Ohio State since the end of last week. And despite no public verification that he’s even a candidate for the Buckeyes, the smoke is getting thicker and thicker: He may have a pretty huge decision to make soon.

I still believe it’s unlikely that Raymond would leave LSU — his alma mater and his home — for any school. But Ohio State has reportedly made a very lucrative offer that LSU has, to this point, not chosen to match.

But it’d be shocking to me if they didn’t elect to do that soon — or at least attempt to. As with Washington on Monday night, it’s reasonable to expect that a decision will be made one way or the other soon. The Buckeyes need to finalize their coaching staff this week.