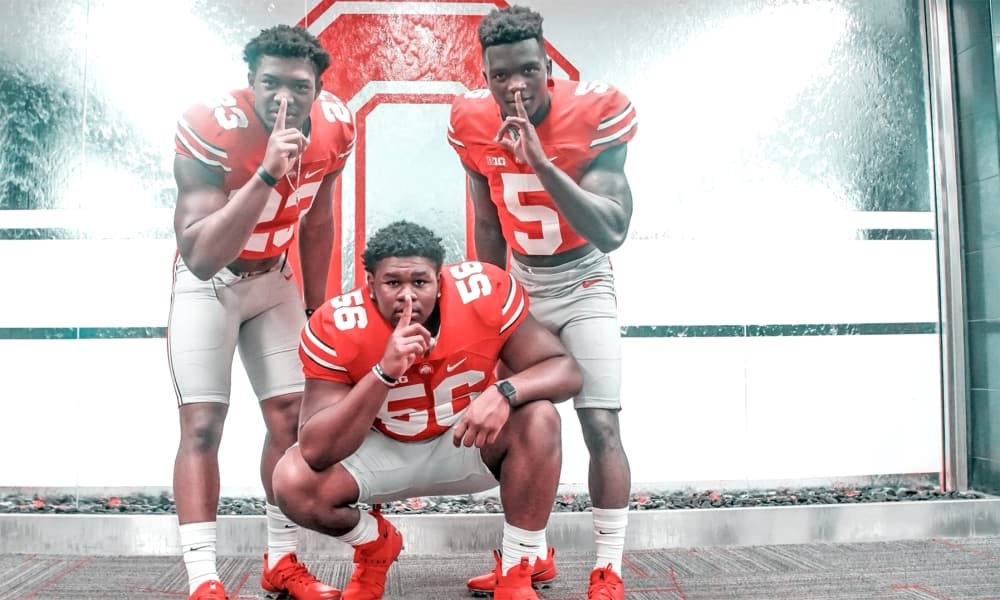 As the new July recruiting dead period came to an end last week, Ohio State geared up for a major recruiting weekend on campus. The Buckeyes aimed specifically at the Class of 2020 with more than a dozen top targets from that recruiting class making their way to Columbus.

Among them were three teammates from Washington (D.C.) St. John’s College High School: 5-star linebacker Mekhail Sherman, 4-star defensive tackle Tre Williams and 4-star wide receiver Rakim Jarrett. Each of them came away impressed as the Buckeyes made a big move in their recruitments.

It’s rare that a trio of teammates in one recruiting class have this kind of recruiting profile, so for the Buckeyes to get all three on campus at once and to take a swing at all three at once is a major opportunity. Here’s what they had to say about their visit.

“It went very well. It was a very, very, very good first impression. The thing that stood out the most was the chance to build relationships with the coaching staff over those two days. They pulled me in on the academics at the school. My major sits No. 1 in their program. That’s definitely a plus.”

“Ohio State was everything I thought it would be — and more. The business school is one of the best in the country. [People] don’t even take a chance to do the research on the school itself, they are just quick to say since Ohio State is a great football school that their academics can’t be the same. I really enjoyed it there. I loved the people and the place.”

“It was great. I’ve always wanted to visit and it was shocking that I was finally there as a recruit. I still had to be focused on what they have to offer me as far as an education and football. What stood out to me was a program they have called ‘Real life Wednesdays.’ It’s a program that helps guys gets internships and jobs after they leave Ohio State. That was eye opening because football ends for us all some day. It helps makes us better for when that happens, and helps you know how to do a better job of pursuing that when it’s over.”

Because this group consists entirely of 2020 prospects, the Ohio State coaching staff hasn’t had much of a chance to build relationships yet. This on-campus visit started that endeavor in earnest with each player, but with three different assistants taking the lead.

“[Linebackers coach Bill] Davis definitely showed me how his years in the NFL impact his coaching. I could see it in the way he coaches. We sat in the meeting room nearly an hour just doing chalk talk, but also really just talking man to man.”

“I really loved breaking down my film with [defensive line coach Larry] Johnson. It was great having him give me little tips and pointers on how to improve my pass rush and get off. He’s one of the best coaches in the country, and it showed.”

“[Interim wide receivers coach Brian] Hartline is my guy. He was real cool to sit down and talk with. It’s exciting that I’m starting to build a relationship with him. I’m looking forward to further talks to see how he is, but it was a great first impression. He’s been where I want to be.

“He is a very smart guy when it comes to film. He knows what it takes to get in the league, so him teaching college guys the ways makes it much easier. It was very unique to just sit and ask him questions about the NFL, like who was the toughest defensive backs he’s faced and other questions people can’t usually ask.”

What comes next with these stars and Ohio State?

The Buckeyes have six current commitments in their Class of 2020, and there’s no doubt that Sherman, Williams and Jarrett are all top targets at their respective positions. The question now is this: Where does Ohio State stand with them?

“Ohio State is very close to the top of my list. It has so much to offer. If I can, I’ll definitely be returning for the game against Michigan in November. I’m not going to be rushing it, but Ohio State is up there. I really felt like I fit in there.

“I really enjoyed it at Ohio State. But there is a long way to go in my recruitment. I’ve got a couple of schools that I like the most, and Ohio State is definitely one of them. I am still weighing my options. My visit there was eye-opening, but the earliest I would commit is April and it could be as late as signing day.”

“I’ve just got to think some things over and talk to my mom about it. Ohio State is at the very top of my list. After my visit, I’ve told my mom my plan about the few schools that hold my interest the most to this point. Now we’ll wait to get her on the phone with the head coaches and position coaches at those places, so she can feel the trust that I’ve seen in person. I’ll go on about my recruitment from then on.”