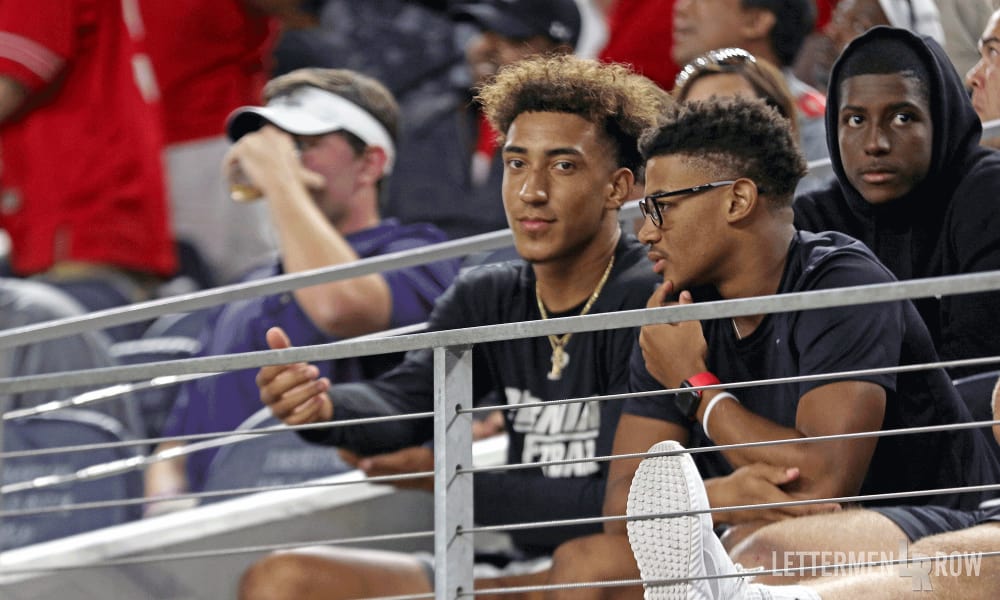 198 miles or so south of Arlington, Texas, the Texas Longhorns were hosting the USC Trojans in a prime-time, major matchup for two of college football’s all-time great programs. While the ‘Horns were thumping the Trojans and picking the school’s 900th win, dozens of the country’s best recruits, and the best recruits from Texas, watched closely from the stands at D.K. Royal Stadium in Austin.

So, all things considered for Ohio State, the fact that many players, including Odessa Permian 4-star cornerback prospect Peyton Powell, chose to travel to AT&T Stadium to check out the Buckeyes versus the Horned Frogs is a pretty great thing.

All in all, the Buckeyes purchased 100 tickets for recruits to attend the game as their guests, and at least a handful or two showed up, but none were more important than Powell, who is now just nine days away from a college decision. Whether or not this opportunity to see Ohio State turns the tide in his recruitment — things have been trending toward Oklahoma since they offered in August — is up in the air, especially considering the Buckeyes couldn’t communicate with him, but clearly Powell is still thinking about Ohio State a bit.

Other big time prospects like RJ Mickens, the country’s top-ranked 2020 safety, 4-star running back E.J. Smith and Jaxon Smith-Njigba, a talented 4-star wide receiver from nearby Rockwall were in attendance as well.

The Buckeyes always travel well, which isn’t a surprise, but it’s rare for any program to have the draw that Ohio State does for recruits, even when they’re on the road.

Another recruit that watched Ohio State on Saturday night at Jerry World was Southlake Carroll’s Quinn Ewers, the only 2022 prospect offered by the Buckeyes to this point.

Ewers was offered by Ohio State this past summer after camping in Columbus and throwing the ball very well in front of Ryan Day and the rest of the Buckeyes coaching staff. He is too young to be allowed any real communication with Ohio State (or any other school), so getting a rare opportunity to see them in person in his hometown was something he didn’t want to pass up.

“It was a lot of fun,” Ewers said of the game. “Ohio State fans travel very well. There was more red than purple last night in the stadium. That was a little surprising since TCU isn’t far from the stadium at all.”

As you’d imagine, the 6-foot-3, 180-pound Ewers spent most of his night watching Dwayne Haskins and the Ohio State offense.

“Ohio State knows how to finish off close games,” he said of the Buckeyes offense. “And they really can put points on the board. Dwayne Haskins has a very strong arm and is really accurate. I can see myself in that system.”

We told you on Thursday that Mansfield Timberview’s Jalen Kimber, a 3-star defensive back prospect with offers from TCU, Texas A&M, Baylor and others, visited AT&T Stadium as a guest of Ohio State over this weekend as well. He liked what he saw from the Buckeyes defense, but also from the pro-Ohio State crowd.

“I had a great time,” Kimber told Lettermen Row. “The atmosphere was crazy and it was obviously a really good game. Ohio State fans are crazy about their team, in a good way.

“The fans were great. They love Ohio State football and they have so much tradition there. Their defense was good, and they are very consistent in how they play. They expect to win these tough games and they don’t quit.”

Kimber was in attendance with a group of 7-on-7 teammates, including the aforementioned Mickens. He remains a player that is worth watching as the Buckeyes continue to evaluate 2020 athletes from all over the country.

If Ohio State secures Jameson Williams, who else could be a future member of Zone 6?
Dotting the ‘Eyes: Bryan Bresee will visit Ohio State as program returns to normal
Advertisement