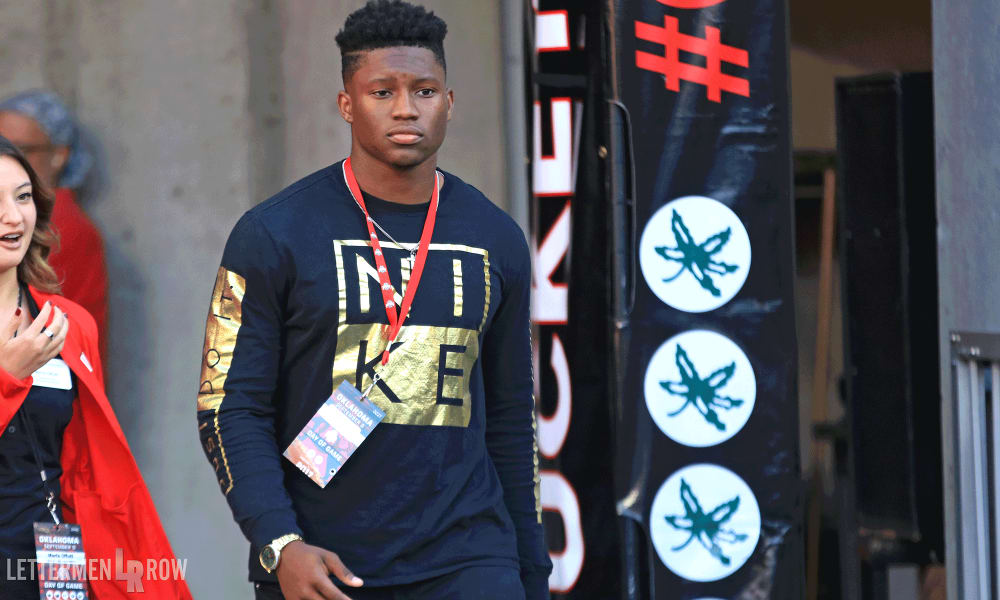 Noah Cain was last at Ohio State in September of 2017. (Birm/Lettermen Row)

Stay in touch or be left out because Ohio State recruiting is a 24-hour, seven-day-per-week obsession. What’s the latest news as the Buckeyes build for the future? Get that and more Sunday through Thursday on Lettermen Row, including today’s discussion on how Ohio State’s recruitment of Noah Cain and Cavon Butler.

It’s been talked about for a while, but 4-star running back Noah Cain has made it official: He will visit to Ohio State.

“Yes, sir,” Cain told Lettermen Row on Sunday night when asked if his visit was set for The Game against Michigan on Nov. 24.

Ohio State has long been in contact with Cain. He took four different visits to the school in 2017, but he has not returned to campus since September of that year. When the Buckeyes landed a commitment from 4-star Sampson James and then from 4-star athlete Steele Chambers, it seemed the chances of landing Cain plummeted to almost zero.

When James decommitted in early October, Cain immediately became a top contender to replace him thanks in part to that longstanding relationship with the Buckeyes, especially running backs coach Tony Alford. However, the last year allowed a number of big-time programs with personal ties for Cain to step up and take root in his recruitment, with LSU and Texas both digging in their heels.

The Tigers are back to playing smash-mouth football, and Baton Rouge is where Cain was born. Texas is where he lived for a few years, and part of his interest in Ohio State is rooted in Longhorns running backs coach Stan Drayton, thanks to his development of guys like Carlos Hyde and Ezekiel Elliott

LSU is working hard to flip 5-star running back John Emery, a Louisiana-native who is committed to Georgia. Cain isn’t not concerned about that. He’s maintained throughout his recruitment that he’s only going to pick the place that will fit him the best with no attention being paid to who else that team is recruiting. That’s why he maintained his bond with Alford despite the probability that Ohio State wouldn’t have room to take him even if they wanted to.

Things change, in every situation. Ohio State is likely to lose Mike Weber following the season, and the expectation is that J.K. Dobbins could follow suit following 2019. With uncertainty around Brian Snead’s future, Cain could see a Buckeyes depth chart that has only Master Teague III and Steele Chambers on it by his sophomore season, and that’s inviting to a tailback that believes he’s ready for primetime.

Cain has been patient throughout the recruiting process, and all the machinations and moving parts are a big reason why.

“I just know I’ll end up wherever God leads me on Dec. 21,” Cain said. “That’s why I haven’t committed to anybody.”

It appears that the Buckeyes are serious in their pursuit of Toledo Whitmer defensive lineman Cavon Butler. Ohio State offered him in early October following a game-day visit, and Larry Johnson made seeing Butler a priority on Monday, visiting the Panthers star on the first day of the Buckeyes off week.

Butler remains committed to Kentucky, but there’s a sense that as long as he’s able to maintain his academics, his ultimate decision would lead him to flip to the Buckeyes. The 6-foot-3, 285-pound lineman plans to take an official visit to Ohio State on Nov. 24. He visited Michigan State last weekend when the Spartans hosted the Wolverines.

Johnson also was expected to visit Cincinnati Princeton High School on Monday to check in on 4-star 2020 defensive end Darrion Henry and 4-star linebacker Jaheim Thomas, among others. Ohio State is the favorite to land Henry, but they’ve not extended a scholarship offer yet to Thomas.

Ohio State running backs Tony Alford was in Florida, where he saw running back Marcus Crowley at Jacksonville’s Trinity Christian Academy on Monday. Crowley will make an official visit to Ohio State on Nov. 3.

The Buckeyes offered another 2020 defensive end over the weekend.

I am extremely blessed to receive an offer from The Ohio State University pic.twitter.com/KIIG54N6zP

Desmond Evans is the country’s second-ranked weakside defensive end in the Class of 2020 and a top-30 overall prospect. He’s a 6-foot-6, 240-pound end from Sanford (N.C.) Lee County High School and is regarded as North Carolina’s highest-ranked junior. He was offered by Alabama the day before the Buckeyes threw their hat into the ring and watched the Crimson Tide blow out Tennessee in Knoxville this past weekend.

Clemson, Alabama, Georgia and all the familiar names will be involved here, so Ohio State will have no shortage of major competition in this recruitment.

The Ohio State basketball program will reportedly find out soon if it has done enough to land another top player from Toledo. Zeb Jackson, a 4-star point guard in the 2020 class, is expected to announce his college choice on Tuesday.

2020 four-star Zeb Jackson will announce his college decision on Tuesday, he tells Stockrisers.

Jackson is a top-50 prospect.

Early in his recruitment, Jackson appeared to be leaning toward Butler. But the Buckeyes, Michigan State and Michigan all made a significant push in September. The Wolverines appear to be in the best position heading into decision day. John Beilein’s work with the Wolverines has reportedly made a big impact on Jackson, and Michigan’s style of play fits his very well.

If Jackson ends up in Ann Arbor, all is not lost for the Buckeyes though. Ohio State has already offered 2020 point guard Dominiq Penn, the son of former Buckeyes star Scoonie Penn. The elder Penn is currently the director of player development for the Ohio State basketball program and the Buckeyes are in a good position right now to land his son. Dominiq is the state’s third-ranked 2020 prospect, while Zeb Jackson is the second-ranked player in Ohio for that cycle.