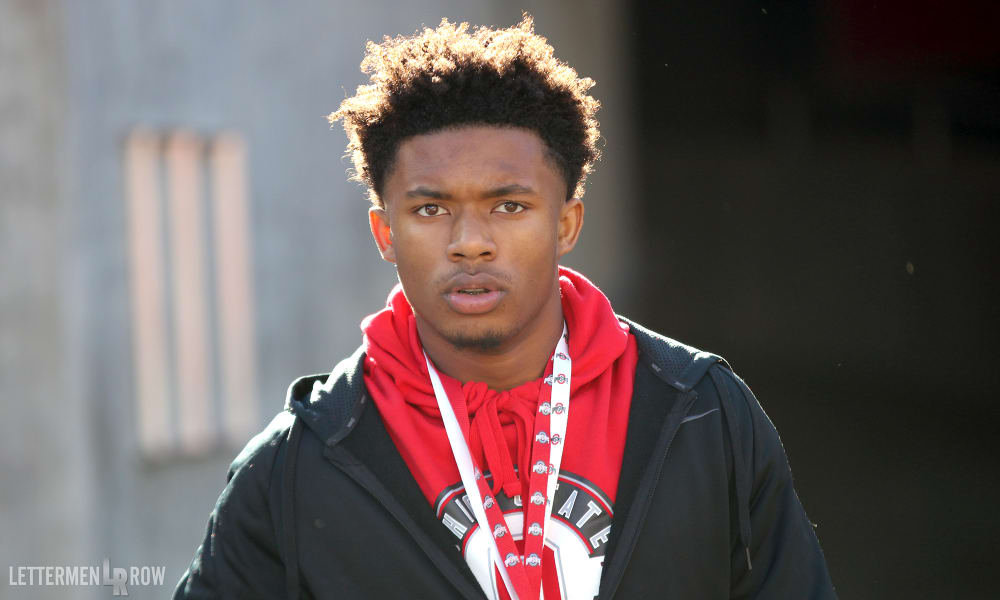 Stay in touch or be left out because Ohio State recruiting is a 24-hour, seven-day-per-week obsession. What’s the latest news as the Buckeyes build for the future? Get that and more Sunday through Thursday on Lettermen Row, including today’s talk offensive lineman Nick Broeker and 2020 wide receiver Muhsin Muhammad III.

On Monday, we talked about 2021 quarterback Drake Maye, who visited Ohio State this past weekend for the home game against Nebraska. In that episode of Dotting the ‘Eyes, we referenced that Maye had made the visit to Columbus alongside his go-to target at Myers Park High School in Charlotte, N.C., 4-star 2020 prospect Muhsin Muhammad III. Maye left with an offer, Muhammad didn’t. Though he admits to feeling disappointed a scholarship from Ohio State wasn’t presented, the visit itself was memorable.

“It was a great enviroment and very ‘homey’ vibe,” Muhammad told Lettermen Row. “I talk to Urban Meyer on Saturday and again Sunday morning. I got quite a bit of time to kick it with [Ohio State receivers coach Brian] Hartline and also [new Buckeyes commit] Jaxon Smith-Njigba.”

The country’s No. 26-ranked receiver in the class of 2020, Muhammad believes an offer from the Buckeyes still could come his way. He said Brian Hartline is trying to get his personal recruiting board in order.

“I think Hartline wants to get organized first,” Muhammad said. “There are offers out there that he didn’t throw out, and there have been a few recruits that tried to commit that they’ve had to say no to.

“Hopefully it should roll in by the spring.”

Muhammad’s father played at Michigan State before spending more than a decade in the NFL. Both of his parents were impressed by what Ohio State presented their son.

“They were sold,” the 6-foot, 180-pound junior said. “Pops had to leave early on Sunday morning, but Urban Meyer, Brian Hartline, Kevin Wilson and Keenan Bailey all made my mom feel at home.”

With his high school football career finished, Sacred Heart Griffin (Springfield, Ill.) will turn his focus to basketball and putting the finishing touches on his recruitment.

Broeker, a 6-foot-6, 285-pound offensive tackle, won’t get much of a break between sports. His football season ended last Friday night, and basketball started on Tuesday. That is what has made scheduling a visit to Ohio State difficult to this point.

“I started basketball practices on Tuesday,” Broeker told Lettermen Row. ” I have games starting with a Thanksgiving tournament. We still haven’t talked about when we will do any of the official visits quite yet.”

Any in this case means either, really. Broeker committed to Ole Miss in June. He was offered by Ohio State on the first of October, and it’s very likely those two schools will be the only places he visits.

And he will visit Ohio State.

“More than likely [those are the only visits], yes,” he said. “We will definitely be taking a visit to Ohio State. We’ve talked about the Ohio State and Michigan game as a potential date.”

There’s a very simple reason for Broeker to take a trip to Columbus, according to the 3-star line prospect.

“I want to make the best decision I can.”

Ohio State landed a commitment from Jacksonville (Fla.) Trinity Christian running back Marcus Crowley following his official visit to the school this past weekend. But Crowley wasn’t the only running back on campus taking an official visit to Ohio State, though. Katy, Texas 4-star prospect Deondrick Glass was as well, and the Buckeyes did what they could to impress him.

“Everything has been answered at this point with Ohio State, I think,” Glass told Lettermen Row. “It’s a great place to get a good education, and I rank them up there with the best places I’ve seen.

“I had a great experience and visit. I really enjoyed the coaching staff and everything Ohio State has to offer. I think [Ohio State running backs coach Tony] Alford was amazing in showing me how to get better at the next level.”

The Buckeyes have two running backs committed now, though, and that means there’s no guarantee that there’s room at the proverbial inn for Glass. That’s not going to stop Alford and Ohio State from staying involved, because they just don’t know what can happen. Next up for Glass is a trip to Alabama, and he’s not sure if he’ll sign in December or February. It makes sense for the Buckeyes to continue keeping tabs on him in the event that something goes awry with Steele Chambers or Crowley.

Julian Fleming may be the biggest draw at Catawissa (Pa.) Southern Columbia High School, but he’s certainly not the only one. The Tigers are the home of a handful of very talented 2020 prospects that play alongside Fleming, including linebacker/safety Max Tillett.

Tillett has no offers yet, but has been hearing regularly from Brian Hartline and Ohio State in recent months. He made his first trip to Columbus last weekend with Fleming and a gaggle of Southern Columbia teammates.

“It was great,” he said. “The atmosphere was awesome.

“The coaches really made it feel like home. The crowd was awesome during the game, too.”

Tillett spent time with Ohio State director of player personnel Mark Pantoni and coach Urban Meyer along with Hartline. Right now, there’s been no talk about what is needed to earn an offer, but he’s excited by the time with the Buckeyes.

“I was with Mark Pantoni and Urban Meyer,” he said. “I talked with coach Meyer along [Tigers teammates] Julian Gaige, Cal Haladay and Preston Zachman. It was awesome. He’s a great guy. We just talked. Hopefully an offer comes because it seems like a great place to play.

“I pretty much expected a great experience, and that’s what I got.”