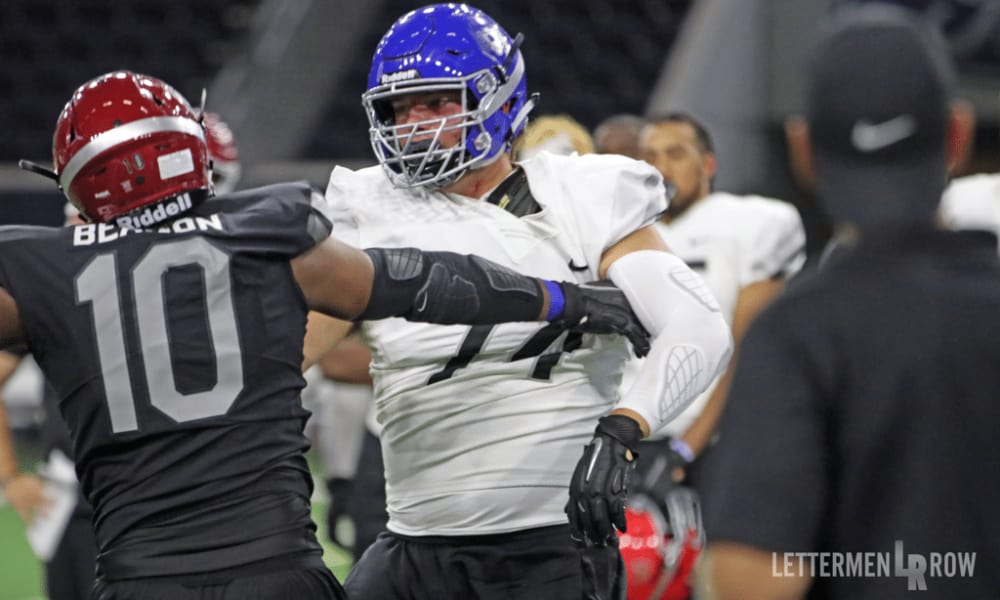 Keeping offensive lineman Doug Nester in the fold is a top priority for Ohio State in January. (Birm/Lettermen Row)

Stay in touch or be left out because Ohio State recruiting is a 24-hour, seven-day-per-week obsession. What’s the latest news as the Buckeyes build for the future? Get that and more Sunday through Thursday on Lettermen Row, including tonight’s update on some of the names Ohio State could chase between now and February in the Class of 2019.

In case you missed it, Ohio State signed 15 players to its football program. The group consists of a handful of stars from around the country, and coach Ryan Day met with the media to break that down on Wednesday afternoon.

“We’re very, very excited about all the players that we signed. I think this class would rank top-five nationally when grading the individual player, not cumulatively,” Day said. “When you look at the quality of the player — and obviously we’ll talk about the student-athlete, as well, how important it is — we think we’re as good as we’ve ever been.

” … [There are] 10 different states represented in the class, five from Ohio, two from Georgia, and then one from Florida, Tennessee, New Jersey, Maryland, Missouri, Texas, Indiana, North Carolina. The class includes players at nine different positions, four on offense, five on defense. Two players were voted Gatorade Player of the Year in their respective states, and five players helped their teams advance to the state title as seniors, and two of them won state championships.”

“Three players, Zach Harrison, Harry Miller and Garrett Wilson, were all finalists for the All-American Man of the Year Bowl down in Texas, and that award recognizes high standards in community service, education and athletic distinction.”

Overall, it was a very good early signing period for Ohio State, but there are definitely areas it will need to address before the February signing period arrives in six weeks. Three positions, specifically, stand out as needing attention. So today, rather than general recruiting updates, we’re going to try and explore a few options at those spots.

Quarterback. Offensive line. Defensive back. Let’s see what’s left. These are the only positions that, as of today, I believe are priorities for the Ohio State coaching staff to add.

What are the options at quarterback for Ohio State?

If Fields does leave the Bulldogs after entering his name in the NCAA transfer portal, I absolutely believe there’s a very real and very good chance he ends up at Ohio State.

But if he doesn’t? Ohio State would then be looking at another top-tier transfer like Jalen Hurts from Alabama, Brandon Wimbush from Notre Dame or Jarren Williams from Miami. And if that doesn’t work, the Buckeyes would still need to add another quarterback to the roster — and at that point they’ll have to search and high and low to find one.

There aren’t likely to be many Ohio State-level options, though. And the Buckeyes aren’t in the business of offering players they don’t believe can play in Columbus.

“We want to make sure that we sign the right guys moving forward,” Day said. “Don’t just want to take a guy down the stretch just to say that we took a guy. This is Ohio State and we want to recruit the best players in the country. But that being said, we’re going to do a really good job of identifying who’s out there in January and evaluate them.”

Here are some of the country’s best quarterbacks that remain either uncommitted or unsigned.

As I said, there are not a lot of real options at this position for the Buckeyes remaining at the high school level.

The offensive line is a major concern moving forward for Ohio State.

The Buckeyes signed only two linemen on Wednesday and Doug Nester, the first commitment in the Class of 2019, remains the lone unsigned commitment for Ohio State.

Keeping the 6-foot-6, 310-pound Nester committed and eventually signing him in February has to be Ohio State’s single biggest remaining recruiting goal as it heads into the holidays and before the January recruiting period restarts the clock before the next signing period. He’s not sure who will be his position coach, and that’s really slowed down Ohio State’s ability to convince him to stay committed.

If Nester stays with the Buckeyes, I think that could be all that they sign at the position. But I personally believe another lineman to run the total to four would be a good idea for Ohio State. The Buckeyes clearly wanted to add one more with the way they recruited Michigan State signee J.D. Duplain and Ole Miss signee Nick Broeker in the last two months.

With or without Nester, I think Ohio State needs a tackle in this class. Who are some options? Again, like the quarterback position, pickings are kind of slim at this point. There are a lot of kids who are much closer to multiyear projects than they are ready to contribute at Ohio State.

After losing Jordan Battle to Alabama, the need for a cornerback or two became much greater for the Buckeyes. Battle had been their main target at the position for months, and now they’ve got about six weeks to try to replace him.

Here are some of the top remaining available defensive backs across America.

It should be noted these names aren’t guaranteed to get interest from Ohio State. But this is my opinion on some of the best remaining options out there for Ohio State as it looks to add three or four more names to the Class of 2019.