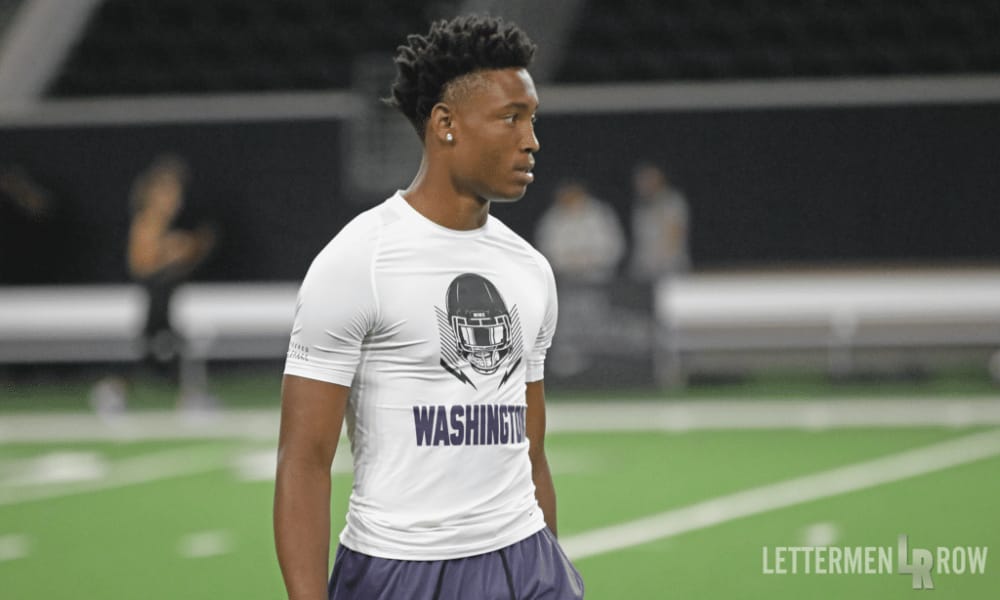 The Opening is closed. The summer dead period in college football recruiting is alive.

That being the case, it’s time for #fakenews to make its way through the college football recruiting world. And as such, #RankingsSZN is upon on.

Don’t get me wrong, rankings matter. Stars matter. The people in charge of this stuff work long hours to evaluate prospects from all corners of the country, and in doing so, have become an invaluable resource to coaching staffs at all levels of college football.

Most of the time, these rankings provide excellent insight into who is and who isn’t, going to be a college football star. Sometimes, though, there are things that happen that don’t make a whole lot of sense to those on the outside of the evaluation rooms.

The case of Marcus Washington, who 247Sports.com had pegged as the No. 9-ranked wide receiver in the country prior to the start of The Opening, is one of those instances.

After suffering a hip flexor injury at The Opening, Washington didn’t participate in any activities or drills in Dallas for much of the event. Today, two weeks later, he now finds himself ranked as the No. 5 wide receiver in the 247Sports.com rankings — just in the state of Missouri.

Yes, Washington tumbled from the No. 9 spot in the wideout rankings to No. 73, dropping a total of more than 500 places in the overall prospect rankings.

“I don’t know what happened,” Washington told Lettermen Row. “But that’s crazy. I can’t be too mad, it just adds more fuel to the fire.”

There will certainly be some who read this as sour grapes. Yes, I cover Ohio State and the Buckeyes are the perceived leader for Washington’s commitment, whenever it comes. But to be confused about this sort of free-fall isn’t about who I cover, it’s about understanding that football isn’t about shorts and T-shirts.

Washington ran poorly at The Opening, which certainly is understandable considering the hip issue he’d been dealing with. His ranking was significantly higher after his junior season, and it’s not as though there was a giant revelation about the level of his competition in just the last few days.

He’s been a top player on the Ohio State recruiting board for months and has offers from Georgia, Alabama, Texas, Oklahoma, Notre Dame, Michigan and pretty much everyone that’s anyone on the major college football scene. I saw a handful, maybe a dozen, better wide receivers at The Opening than Washington. But one camp can’t and shouldn’t dictate any ranking, let alone precipitate a drop of this magnitude.

Rankings do matter. Stars do matter. But it’s these sort of subjective decisions, ones that completely contradict all the work a network has done previously on a player based on very limited data, that give complaints from critics validation.

Moving off the soapbox and onto the current group of Ohio State verbals that saw their own rankings move after the summer evaluation period.

As expected, center Harry Miller jumped into 5-star status on the 247Sports.com composite rankings thanks to a 16-spot bump to No. 48 overall. He’s now the No. 32-ranked overall prospect in the country via the composite rankings, but remains the No. 2-ranked center behind Oxford, Alabama’s Clay Webb. He should not be.

Though he was not at The Opening, Ohio State verbal Steele Chambers made a big leap in the 247Sports rankings. Chambers jumped almost 200 spots to No. 161 overall. Jordan Battle was really good at The Opening and he moved up from No. 65 overall to No. 58.

Doug Nester struggled in pass-protection at The Opening, and he dropped to No. 82 overall in the country.

Here are the current rankings for Ohio State commitments in the Top 247 per 247Sports.com.

Ohio State commitments Dwan Mathis, Ryan Jacoby, Noah Potter and Craig Young are currently outside of the Top 247 per the 247Sports network.

One of Ohio State’s top remaining 2019 targets has set a date for his commitment.

That is Odessa (Texas) Permian athlete Peyton Powell, and the Buckeyes are recruiting the 6-foot-2, 180-pound Powell as a defensive back. He made an official visit to Columbus in June, and since that time, Ohio State has been the 247Sports.com crystal ball favorite. The Buckeyes currently own all 11 predictions. Powell’s decision has been delayed because he wants to take a few more visits prior to announcing a choice.

“I’m going to TCU and Baylor soon,” Powell told Lettermen Row on Thursday morning. “And I’m still trying to get to Texas and Arkansas.”

What makes Powell’s recruitment interesting is that he’s been recruited as heavily at wide receiver as he is at defensive back, so ultimately his choice will come down to the school that he feels allows him to be developed best, regardless of what position he plays in high school.

My personal crystal ball is on Ohio State, and I think Powell could be one of a handful of players to verbal to the Buckeyes in August.

We’ll end this edition of Dotting the ‘Eyes with your favorite thing: a list.

Lakeland (Fla.) Kathleen 4-star defensive back Brendan Gant seems to have narrowed his 17 offers into a Top 11 list. My condolesences to the six schools that offered but didn’t make the cut.

A former Alabama commitment, Gant visited Ohio State for the second time in early June. An invitee to The Opening, Gant checked in at 6-foot-1, 192-pounds and recorded a 4.75 in the 40-yard dash while in Dallas.

Ohio State has two defensive backs committed in Bryson Shaw and Jordan Battle, and it has two athletes that could play the position in Craig Young, Ronnie Hickman. It’s unlikely at this point that they should be considered a real contender for Gant.

How will next Ohio State recruiting class look by start of the season?
Scarlet Sunrise: Ohio State football favored to repeat as Big Ten champion