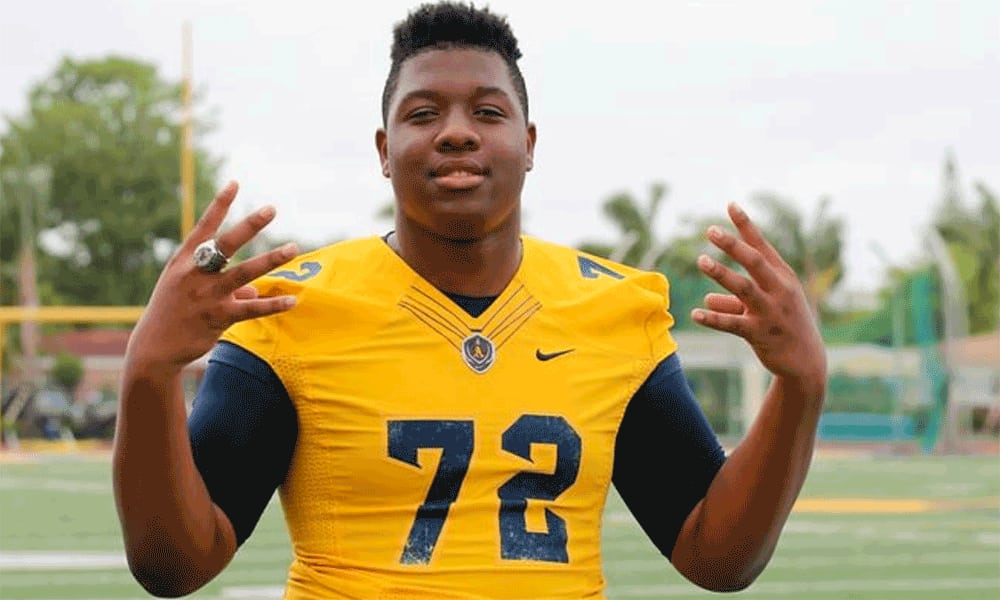 Stay in touch or be left out because Ohio State recruiting is a 24-hour, seven-day-per-week obsession. What’s the latest news as the Buckeyes build for the future? Get that and more Sunday through Thursday on Lettermen Row, including news on another Florida standout interested in the Buckeyes, Marcus Dumervil.

Ohio State has always fared well when recruiting St. Thomas Aquinas in Fort Lauderdale, Fla., dating back to Duron Carter to the Bosa boys and Damon Arnette. It’s that solid reputation with the Raiders that has opened the door for the Buckeyes and 2020 offensive lineman Marcus Dumervil.

“A lot of St. Thomas guys have gone up there and done good things,” Dumervil told Lettermen Row. “And Ohio State is a big program.”

Dumervil is big, too. He’s a 6-foot-6, 295-pound offensive tackle. And, yes, Ohio State has two commitments from tackles already in the Class of 2020. Still, the two sides are in regular contact and the country’s No. 21-ranked offensive tackle is a regular in the famed Ohio State “group chat.”

“I talk to [running backs coach] Tony Alford every week,” Dumervil said. “I’ve spoken a bit to Urban Meyer, too. I am not quite sure how I fit into their plans on the line.”

What Dumervil is sure of, though, is that Ohio State’s reputation keeps them as one of the top schools in his mind. His teammate Jordan Battle is committed to the Buckeyes and one of the players he talks with about Ohio State.

“I talk to Jordan Battle and [former Ohio State wide receiver] Trevon Grimes about Ohio State,” he said. “They love it there. I am looking for a family feel, a great education and a big-time program.”

Dumervil said he’s working on getting himself up to Columbus for a visit this season.

Williams was ranked as the No. 2-most wanted prospect in the Lettermen Row “Most Wanted” list, and with his commitment, we’ve had to reshuffle the deck a bit.

Zach Harrison remains at the top of the list, of course. But Kentucky’s Wandale Robinson has jumped ahead of 5-star offensive tackle Darnell Wright into the No. 2 slot. That is not because Robinson is more wanted than Wright, but because I think the odds of landing Robinson combined with the Buckeyes interest in him warranted a bump.

Florida cornerback Kaiir Elam has been dropped from the list. So, too, has Hawai’i defensive tackle Faatui Tuitele and Washington (D.C.) offensive lineman Walter Rouse. Elam and Tuitele just do not appear to be a priority for the Buckeyes at this point, and Rouse has committed to Stanford.

Four new players have been added: West Virginia’s Brenton Strange, Ohio’s Tommy Eichenberg, North Carolina’s Jaden McKenzie and Florida’s Tyler Davis. Strange has been a consistent target for Ohio State for months, despite adding a commitment from another tight end, Cormontae Hamilton, in July. Eichenberg was just offered last week, but it’s clear that the Buckeyes have decided he’s an important player to add. They wouldn’t risk the loss of a player to Boston College, where he’s currently committed, if they weren’t sure he could play in Columbus.

McKenzie is a very interesting prospect to me, similar in size and style to former target Etinosa Reuben, who committed to Clemson. Ohio State needs to get him up for a visit before things can really heat up with this defensive tackle, but he’s got a lot of upside.

That Most Wanted list will get updated every so often, so be sure to check it out.

The Buckeyes are working hard to recruit the state of Michigan. Last week, they offered another of that state’s best prospects, Ian Stewart, a 6-foot-3, 190-pound receiver from Rockwood’s Oscar A. Carlson High School.

A 2020 prospect, Stewart was a Michigan fan growing up. But the recruiting process has already changed his mind a bit, knowing he can’t be a fan of any team at this point.

“You don’t look at it from a fan standpoint anymore,” Stewart told Lettermen Row. “You want to go somewhere where you can be successful on and off the field.”

That’s what has Stewart’s attention about the Buckeyes.

“I know how great of a program they are,” he said “They simply win and will do whatever it takes to win.”

Stewart has a visit planned to Ohio State for Oct. 13, and until then, it’s just about building a relationship.

“The offer came out of nowhere, kind of,” he said. “But we’ve been in contact throughout summer after [Ohio State cornerback coach] Taver Johnson saw me at a satellite camp in early June.”

Last week we introduced 2022 quarterback Chase Harrison, who visited Ohio State when the Buckeyes hosted Tulane. He was not the only 2022 in-state quarterback visiting that day, though. The other, Franklin Heights (Columbus) quarterback Jeff Beverly, spent a couple days at Ohio State this summer camping with the Buckeyes.

Beverly, 6-foot-4 and almost 200-pounds, looks like a seasoned signal caller, though he just made his first high school start on Friday. He’s a local player and grew up rooting hard for Ohio State. The chance to visit the school as a recruit on a game day was a memorable experience for him.

“Overall the atmosphere was amazing,” he told Lettermen Row. “Just being there gave me the chills. What really stood out to me the most was, as I looked around, thinking to myself that I would really love to be here. The visit was just amazing.”

Ohio State’s game days are pretty hectic, but Beverly found time to talk a bit with the staff.

“I was talking to Ed Terwilliger and Devon Smith,” he said. “They were just telling me to keep working. I really liked taking to coach Terwilliger and Smith, they are some great guys.”

There’s a lot of time left in the process for Beverly. He’s got to grow as a quarterback and will get the chance to start the rest of his freshman season at Heights. He’s trying to take in the recruiting process and develop his game right now. Besides Ohio State, he’s also heard from Michigan, Michigan St, Ole Miss, Rutgers, Cincinnati, Kentucky, Toledo and Western Michigan.

“I was just going to camps and getting a feel for the year,” he said. “This year was my first year ever visiting or going to any schools and camps, then it just kind of exploded out of nowheree. Then I started getting looked at by Big Ten teams and I’m blessed. This wouldn’t be happening without God or my parents.”