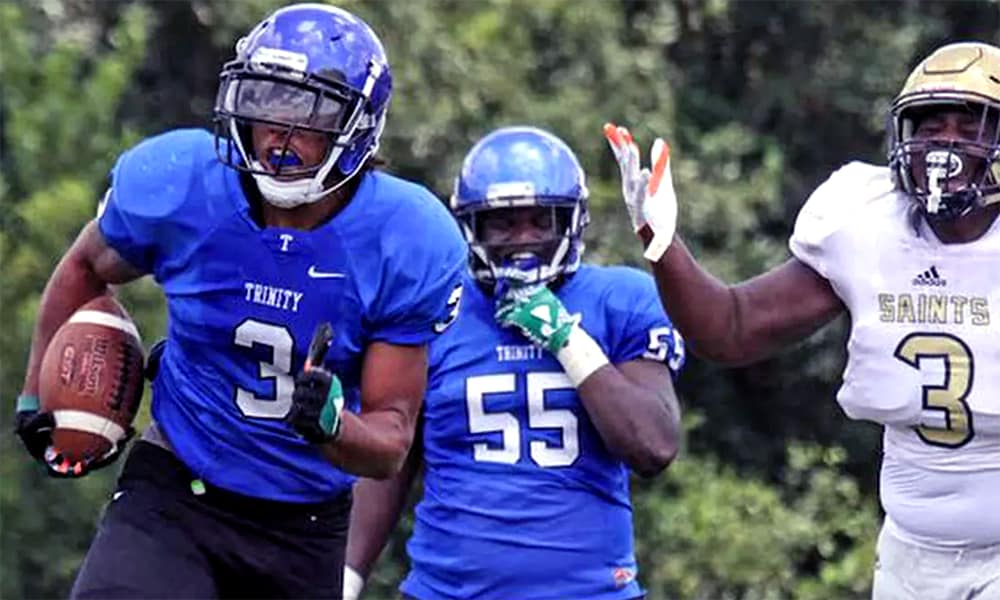 Marcus Crowley is heading to Ohio State for an official visit on Nov. 3. (Photo via 247Sports.com)

Stay in touch or be left out because Ohio State recruiting is a 24-hour, seven-day-per-week obsession. What’s the latest news as the Buckeyes build for the future? Get that and more Sunday through Thursday on Lettermen Row, including today’s discussion about a key official visit from running back Marcus Crowley and the latest on Buckeyes commit Jordan Battle.

Time for Ohio State to make a move with Marcus Crowley?

There is no doubt that Ohio State wants and needs another running back in its class of 2019. That’s why the Buckeyes had a second running back for most of this recruiting cycle, with Avon (Ind.) 4-star Sampson James and Roswell (Ga.) Blessed Trinity’s Steele Chambers committed.

I feel confident in saying that right now the Buckeyes would absolutely welcome Crowley into their recruiting class, regardless of what it meant for any chances with Cain or Katy (Texas) 4-star Deondrick Glass. Ohio State will get its first real shot to land to Crowley this coming weekend when he makes his official visit to Columbus and checks out the Buckeyes against the Nebraska Cornhuskers.

The question is whether or not Crowley, who has been committed to Miami since December of 2017 and has focused his recruitment exclusively on the Hurricanes since, is really interested in the Buckeyes. The fact that he’s taking this weekend’s official visit indicates that he is, but interest hardly equals a commitment in recruiting.

Fortunately, Ohio State does have some things working in its favor. Buckeyes defensive backs Shaun Wade and Tyreke Johnson have been vocal, working to assist the Ohio State coaches where they can. Tony Alford, the Buckeyes running backs coach, has been extremely consistent in his efforts since the early October offer went out and he’s one of the best in the country at developing true relationships with his recruits, choosing not to focus on football for the most part. That resonates with kids and their families and that’s what the Buckeyes are going to need to rely on this weekend if they want to eventually flip the 6-foot-1, 200-pound Crowley from Miami.

“[The Buckeyes] have to knock it out of the park,” one Florida source shared with Lettermen Row. “Crowley has a lot of his family that wants him close [to home].”

Another weekend will pass where Buckeyes commitment Jordan Battle does not return to Columbus as he and his family have hoped they would. The Ohio State verbal had planned to get to Ohio State’s Oct. 13 game against Minnesota but the noon start time wrecked havoc on potential flights and that issue hasn’t been fixed, so this weekend doesn’t seem to be a “go” either.

“It’s hard for [the Michigan game] as well,” Battle said. “It’s hard for that game as well. It’s playoff season and they have practice on Saturdays. It may not happen.”

If that visit doesn’t happen, neither will the primary reason for the visit, which was to have the family sit down and talk with Urban Meyer in person about the events that led to his August leave of absence and for them to talk to the man they want to coach their son throughout college about his health issues. Rumors about Meyer’s future have cast a large shadow over, and it gets longer the further you get away from Ohio.

“We are all tired of the ‘Urban is leaving’ talk,” Fred Battle said. “If Urban Meyer is there for the next four years, [Jordan] is all in. But is his health that bad that he might step down? We are praying that’s not the case. We are ready for this to be over.”

To this point, I’ve cautioned getting too worked up about the odds of losing Battle, but it’d be a good thing for Ohio State if he and his family are able to see the Buckeyes again in Columbus. Taver Johnson and Alex Grinch visited St. Thomas Aquinas High School last Friday and stayed to watch the Raiders 58-0 blowout win over Pompano Beach (Fla.) Blanche Ely.

“That visit went well,” the elder Battle said. “He put on a show for them.”

Battle committed to Ohio State in June, a week after his official visit with the Buckeyes. How long will he stay committed? That’s up in the air.

Tommy Eichenberg will visit Michigan, not Ohio State this weekend

One of the players Ohio State really wants to add in its 2019 class will visit the Buckeyes biggest rival this weekend rather than heading to Columbus.

According to his father, Gregg, Cleveland St. Ignatius linebacker Tommy Eichenberg will visit Michigan for its home game against Penn State, a game that has serious Big Ten and national championship implications. Eichenberg and St. Ignatius play on Friday night and, with the earlier start in Columbus on Saturday, it’s a bit easier/more convenient to get to Ann Arbor this weekend. Eichenberg will see Ohio State the weekend of Nov. 24, when the Buckeyes host Michigan.

A Boston College commit, Eichenberg’s eventual decision is likely to come down to BC, Ohio State and Michigan but it will be the Wolverines getting the first crack at him on campus. Al Washington, Michigan’s linebackers coach, visited him in Cleveland last Friday night, as did Ohio State linebackers coach Billy Davis. Urban Meyer was at St. Ignatius on Friday as well.