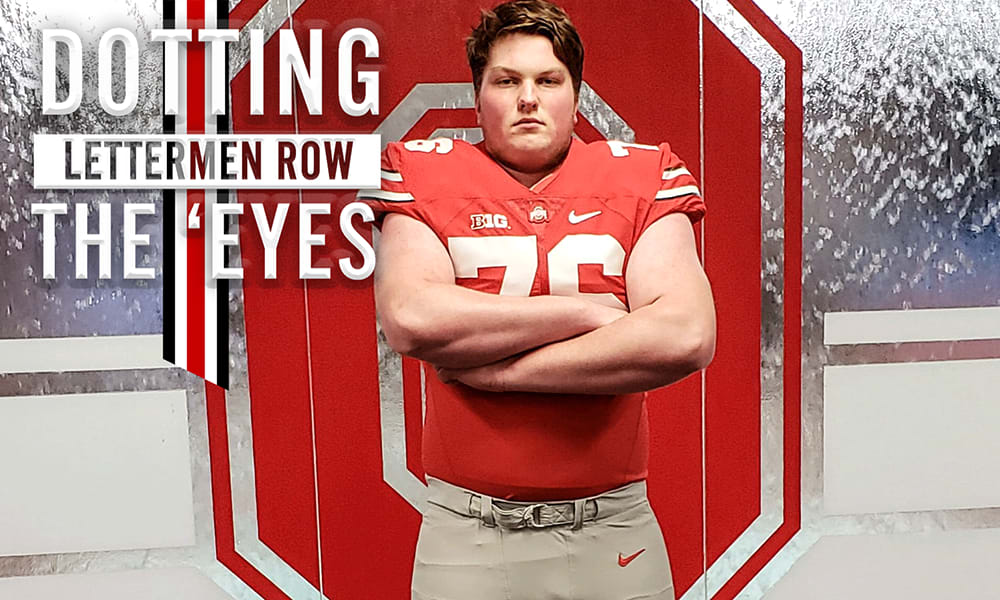 Stay in touch or be left out because Ohio State recruiting is a 24-hour, seven-day-per-week obsession. What’s the latest news as the Buckeyes build for the future? Get that and more Sunday through Thursday on Lettermen Row. Today we talk about 2022 lineman Blake Miller and the newest Ohio State basketball commitment, Kalen Etzler.

Though the 6-foot-6, 315-pound Miller is still a freshman for the Mustangs, he’s already been to campus a handful of times to visit Ohio State and is working on his relationship with the coaches in Columbus as much as he can.

“I’ve gone to and seen three practices now,” Miller told Lettermen Row. “The main thing the coaches are telling me is that they like my film and they think I have a lot of potential.”

Miller has been to Michigan, Penn State, Clemson and other schools already. The quickening pace of his recruitment is something that’s taken him by surprise. He’s recently added offers from Cincinnati, Iowa State, Indiana, Bowling Green, Toledo and more — but there’s no doubt that an Ohio State offer would be a game-changing moment for him.

“My recruiting is going pretty well,” he said. “It was very surprising to me that it picked up speed so fast. I would like to look at all of my options and pick the school that best fits, but I’ve always been a Buckeyes fan.”

Now the Buckeyes are becoming fans of Miller. He’s trying to wrap his mind around that and knows what he’ll need to do in order to land an Ohio State offer.

“[Ohio State] wants to see me at camp so they can get a view of how I move and how I play,” Miller said. “I’m pretty sure the date I’ll be there will be June 6.”

The Northeast Ohio native plans to make a college decision sometime in his junior year of high school and has already been planning to enroll early at the school of his choosing.

Kalen Etzler opens up about his Ohio State commitment

One young athlete who didn’t see a need to wait on committing to Ohio State is 2021 basketball standout Kalen Etzler, a 6-foot-8, 195-pound sophomore at Crestview High School in Convoy.

If the name Etzler rings a bell, it’s because his uncle Doug played basketball for the Buckeyes in the early 1990s. Now, Doug will be tasked with helping develop his nephew into the big-time player that his early top-60 ranking suggests he can be.

“I went down on a visit last Thursday,” Etzler told Lettermen Row. “But I heard through [Doug Etzler] there was a potential offer coming. I had about a week prior to Thursday to think about it, and there is no place I’d rather be.

“Chris Holtmann was especially happy, but [Ohio State assistant Ryan] Pedon had a major grin on his face.”

According to Etzler, there was just no good reason to wait when he knew Ohio State was where he wanted to be all along.

“It’s close to home and they fit my play style,” he said. “I love the staff, and it feels good that I’m able to develop another future family over the next two years of high school.”

Moving forward, the state’s second-ranked 2021 prospect knows it’s all about getting better, bigger and helping land the best of the best to join him at Ohio State.

“I’m working on it hard,” he said. “I’m hitting the weights super hard and watching what I eat better. I need to try and get as many boards as possible and play the best possible defense I can, obviously and I’ve still got work to do in the classroom. I’ll work on Malaki Branham and getting him to join me, he’s special.”

The Opening is still one of the country’s premier recruiting combines. And looking at the list of prospects who attended and excelled at this weekend’s regional camp in Oakland, it’s easy to see why.

Scott was putting on a show as he’s done all spring at various camps around the country. He finished with the second-highest combine rating in a field full of certified freaks like Milton and others.

Ohio State may be closing in on a commitment from the country’s top-ranked receiver, Pennsylvania’s Julian Fleming, but Gee Scott is an absolute star in the making for the Buckeyes.