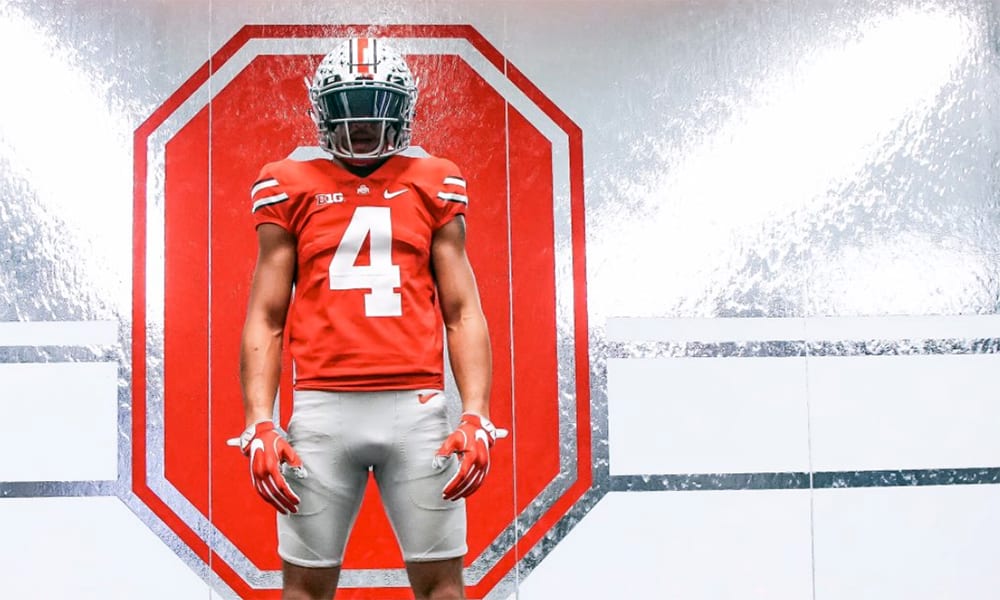 Stay in touch or be left out because Ohio State recruiting is a 24-hour, seven-day-per-week obsession. What’s the latest news as the Buckeyes build for the future? Get that and more Sunday through Thursday on Lettermen Row, including today’s discussion on a number of big-time Ohio State 2020 targets.

It’s beginning to look a lot like football for the Ohio State recruiting staff. This week, with the Buckeyes football team getting a little time off, the Ohio State coaches are on the road and today receivers coach Brian Hartline made a visit to see Julian Fleming, a 5-star 2020 prospect viewed as the country’s No. 1-ranked receiver in that class.

“He was just here,” Fleming shared with Lettermen Row on Thursday afternoon. “It went well. He’s a great guy with a lot of knowledge and he knows how to make it to the NFL. We have developed a great relationship. His message is pretty similar to other coaches, it’s just ‘stay humble, work hard.'”

Fleming, 6-foot-2 and 205-pounds, is a star at Catawissa (Pa.) Southern Columbia High School, is predicted by every single “crystal ball” on the 247Sports.com network to pick Penn State for college. He says that while he’s familiar with Penn State, he believes most of that assumption is just based on how close they are to home for him but that he’s not really dialed in that much on any specific school at the moment.

If Ohio State wants to have a chance to pluck Fleming out of Nittany Lion country, they’ll need to get him as familiar and comfortable in Columbus as he is in State College. He’s visited the Buckeyes just once, in June, but has been planning to return and Hartline’s development of Ohio State’s receivers are a key part of that.

“He’s doing great,” he said when asked his opinion on the Buckeyes wideouts. “The wide receivers are making great plays every week they have some studs.”

So to get comfortable in Columbus, Fleming is expecting to be at Ohio State for the late November slugfest against Michigan. He says there’s a chance he could be there sooner than that, though.

“I’ll know by next Monday,” he said. “But I think I might be there next week, too. I don’t need to see much [specifically about the school, I just wanna see a game and feel the atmosphere.”

Though running back Darvon Hubbard is committed, Ohio State has made it very clear that it would love to bring in a second 2020 tailback and the primary target still appears to be Clovis (Calif.) Buchanan 5-star prospect Kendall Milton.

“I talk to Urban Meyer and Tony Alford every day,” Milton told Lettermen Row. “I probably talk with Coach Meyer the most.”

Not many recruits are talking to Urban Meyer every day, so you know when they are it’s a player the Buckeyes see as vital for their future success. Milton has been eager to get to Columbus for months but it appears he will not get to campus for the Michigan game in late November as he’d previously hoped. Instead, a January visit is more likely. There’s not been a lot of focus on recruiting during the season for country’s second-ranked tailback.

“I’ve just been out here working,” he said, acknowledging that visits and recruiting trips aren’t a priority yet. “I’m shooting go to [Ohio State] in January.”

There’s been a lot of discussion in recent weeks about Kentucky commitment Cavon Butler after Ohio State offered him in early October but he’s hardly the lone option at defensive tackle for the Buckeyes in 2019.

On Thursday, Buckeyes defensive line coach Larry Johnson spent some time in Owings Mills, Md. at the McDonogh School and checked in on tackle D’Von Ellies. The 6-foot-2, 280-pound Ellies was offered by Ohio State in the summer and visited the school for a camp in June. Reports following that camp were very positive — on both sides — and the Buckeyes became a contender to land the country’s 27th-ranked defensive tackle.

Ellies called Ohio State one of his “top choices” in June and had planned a summer-time announcement but that was delayed while he handled some off-the-field requirements. Now, again, it feels like we may be getting closer to a decision for Maryland’s eighth-ranked 2019 prospect.

The question for the Buckeyes may be this: is there a preference between Ellies and Butler? If it’s Ellies, I believe you could see a commitment from him to Ohio State in the next few weeks. If it’s not, another delay or a commitment to a different school may be the outcome while the Buckeyes wait on Butler.

While in Maryland, Larry Johnson (and linebackers coach Bill Davis) also made a pitstop at Washington (D.C.) St. John’s College High School, with a mind to see linebacker Mekhail Sherman and defensive tackle Tre Williams, two of the country’s best 2020 prospects at their respective positions. Unfortunately for Davis and Sherman, a recent knee surgery for the 5-star linebacker kept him out of school today.

“I wasn’t there today,” Sherman confirmed with Lettermen Row. “I have to stay home until Nov. 1 due to my doctor’s orders.”

Ohio State may still see Sherman next month though, so all isn’t lost. The star outside linebacker, and his likely his teammates Rakim Jarrett and the aforementioned Williams are hoping to visit for the Michigan game on Nov. 24.

Ohio State recruiting: What positions are hardest to evaluate for college stardom?
If Ohio State misses on Wandale Robinson, are Buckeyes done at receiver in 2019?
Advertisement