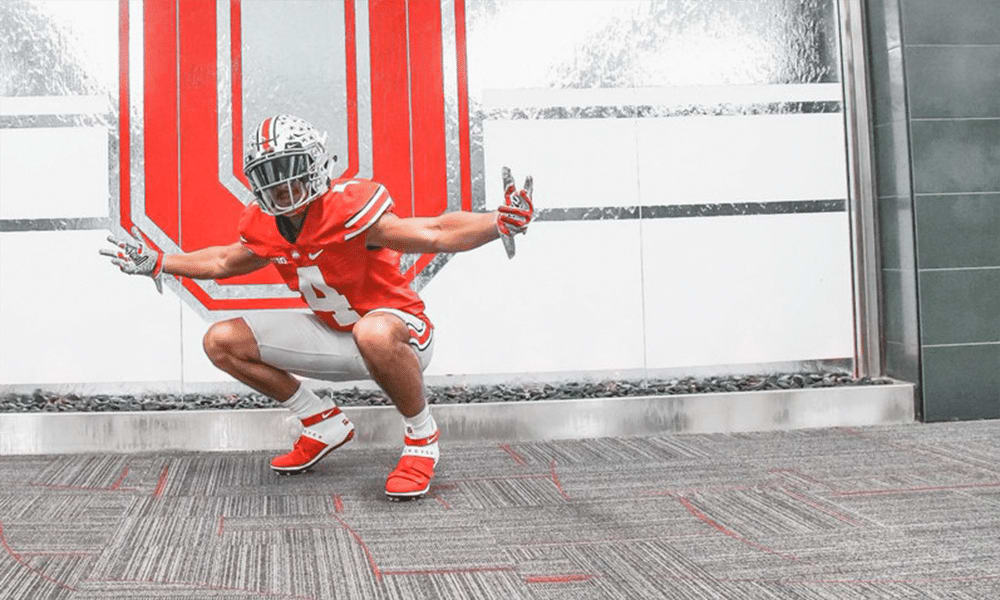 Stay in touch or be left out because Ohio State recruiting is a 24-hour, seven-day-per-week obsession. What’s the latest news as the Buckeyes build for the future? Get that and more Sunday through Thursday on Lettermen Row, including today’s discussion about Julian Fleming, Jay Ward and more

There’s a long way to go before the country’s top-ranked 2020 wide receiver Julian Fleming has to make a college decision, but he’s already playing the college game very well. A week after visiting Ohio State, Fleming helped his Southern Columbia (Catawissa, Pa.) Tigers destroy the Troy Trojans 69-16 and if you’re a Buckeyes fan, then you’ll no doubt appreciate the style with which he did it.

Julian Fleming showed off a new pair of red and white Ohio State gloves as he hauled in two touchdowns on each side of the ball, carrying the Southern Columbia Tiger’s to a …(FREE GAME STORY IN LINK)https://t.co/65WM1ZwKQm pic.twitter.com/braHffGdrs

While I do strongly believe that Ohio State is a serious contender to land Fleming, it’s never too wise to get excited about apparel choices this early in a recruit’s process. Fleming told Lettermen Row on Sunday morning that he’s going to have a lot of fun with what comes next for him.

“I can’t let anyone assume,” Fleming said. “So I’ve got to switch up some hints so no one is ahead of the game.”

The assumption he’s talking about, of course, is the one that says his recruitment ends up with committing to Penn State no matter what. He talked about that assumption in October.

Fleming will return to Ohio State for a second November visit on Nov. 24. Before then though, you should expect more wardrobe changes.

“I am going to throw everyone off,” he said. “Next week it could be Alabama or Georgia.”

Oh yeah, during that 53-point win? Fleming caught seven passes for 107 yards and two scores. He also intercepted two passes while lined up at defensive back and returned them both for touchdowns.

With a lot of smoke around a potential decommitment coming from defensive back Jordan Battle, the Buckeyes may have taken a first step toward preparing for his departure.

ALL GLORY TO GOD 🙏🏾 ……Extremely Blessed and Honored, to receive a offer from The OHIO State University ⚪️🔴 #GoBuckeyes @CCPackersFball @OhioStateFB pic.twitter.com/Y0hj0T9xVD

Ward has also been talking to LSU, which offered in mid-October. He’s a player that the Tigers have high on their board, in case you felt the Buckeyes were alone in this late interest. It’s that very interest that made Ward decide to back off his verbal to the Wildcats, a program he had committed to in June.

The Buckeyes are being proactive here, I think, and they’ve done very well in Georgia traditionally but they’ll need to quickly make a big impression on the 6-foot-1, 175-pound defensive back if they want to upend a program like LSU here.

Ohio State has made some serious inroads into Arizona in the Class of 2020. The Buckeyes already have commitments from Jack Miller and Darvon Hubbard and are leading candidate to land 5-star cornerback Kelee Ringo as well.

2020 RB Bijan Robinson from Salpointe was offered by Ohio State

Bijan Robinson is a 4-star tailback from Tuscon’s Salpointe Catholic High School and he has absolutely blown up his competition in the Grand Canyon State over the last few months. On Friday night, in the Arizona state playoffs, he ran for 259 yards — on nine carries. Prior to this weekend’s outburst, he had accounted for 1825 yards rushing on just 124 carries. The country’s fifth-ranked 2020 tailback is an Arizona legacy (father Paul, a former Cincinnati Bengal, played there), but is going to be a major target for all the big boys in college football and Ohio State is hoping to vault itself into that discussion.

Robinson visited Michigan in October and already has an offer from the Wolverines, Bama, LSU, USC, Oklahoma and others.