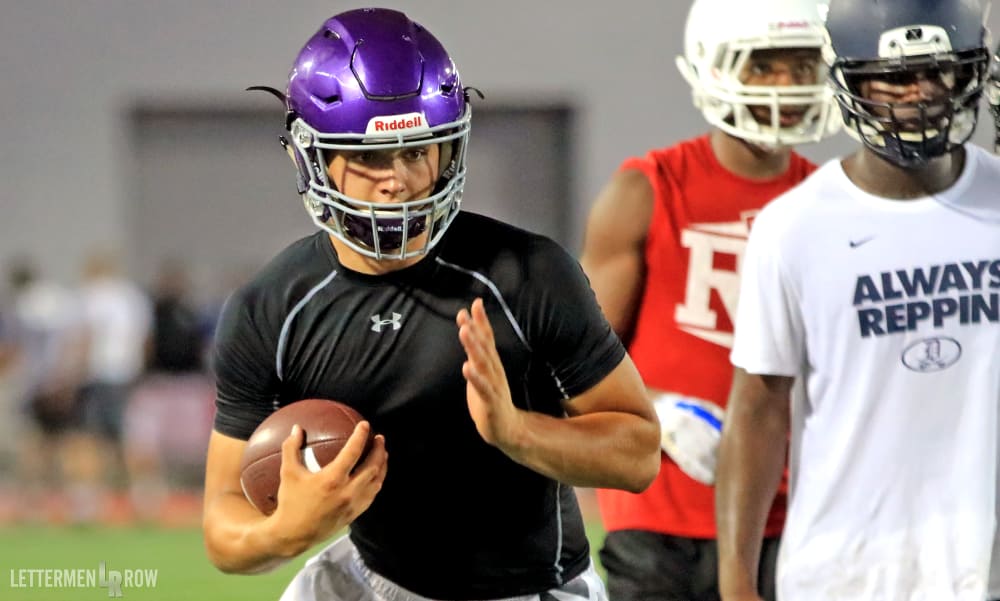 Cade Stover is the Gatorade Player of the Year in Ohio. (Birm/Lettermen Row)

Stay in touch or be left out because Ohio State recruiting is a 24-hour, seven-day-per-week obsession. What’s the latest news as the Buckeyes build for the future? Get that and more Sunday through Thursday on Lettermen Row, including tonight’s update on Cade Stover, Jordan Battle and more.

Cade Stover wins Gatorade Player of the Year in Ohio

Buckeyes 2019 commit Cade Stover may need a bigger mantle in his Lexington home.

On Thursday, Stover was named the Gatorade Player of the Year in Ohio, another major award for the 6-foot-4, 225-pound linebacker who was recently named the Buckeye State’s Mr. Football following his insane senior season.

This week’s been a bit hard on Stover, who committed to Ohio State in April. The news of Urban Meyer’s retirement and the subsequent uncertainty around the future of linebackers coach Billy Davis has the country’s fifth-ranked outside linebacker concerned. Davis visited Stover on Tuesday night, but to this point Ryan Day has not yet stopped by.

“I don’t know when [Day] is coming to see me,” Stover told Lettermen Row on Thursday morning. “I have talked to [Ohio State] though. I’ve just got to see what happens. I’m a really big fan of Coach Davis.”

Stover said that he’s considering a second official visit to Ohio State to get better acquainted with Day, but there’s no concrete plan in place for that yet.

Stover wasn’t the only future Ohio State star to earn the title of Gatorade Player of the Year. Running back Marcus Crowley, a 3-star prospect from Jacksonville (Fla.) Trinity Christian Academy was also tabbed for that distinction.

Crowley is the country’s 39th-ranked running back, but his highlight reel shows why he was the choice for Ohio State’s recruiting class following the unexpected decommitment from Sampson James in October.

The 6-foot-1, 210-pound Crowley will sign with Ohio State in December and enroll in January.

Renardo Green is not coming to Ohio State

At the beginning of last week, there was a plan in place for Apopka (Fla.) Wekiva 3-star cornerback to flip from Florida State to Ohio State. After learning of Urban Meyer’s retirement, that plan is now off.

"It changed," Renardo Green told The Athletic when asked about his interest in Ohio State after Urban Meyer's retirement. "In my case, for the better. I was thinking about going to Ohio State, but I ain't going." The 3-star CB (@nado2times) called his commitment to FSU "strong." pic.twitter.com/XRX0Vhahbh

Green had made his intentions known to the Ohio State staff last week, but he’s changed his mind. The Buckeyes will no doubt expand their search and try to find another defensive back to take his place.

Jordan Battle waiting for Ryan Day before deciding on visit

A pair of Ohio State assistant coaches made a key in-home visit earlier this week in Florida.

The fight for Battle is certainly not over for Ohio State. Alabama is still involved, and Nick Saban visited St. Thomas Aquinas High School on Tuesday. But Ryan Day is expected to visit Battle next week.

“Ryan Day coming back to see Jordan,” the elder Battle said. “I think next week.”

As mentioned in Tuesday night’s edition of Dotting the ‘Eyes, players that have already made an official visit to Ohio State can take a second official visit to the school if they choose because of the head coaching change. It’s a smart, fair rule addition by the NCAA that helps players and their families get back to rebuilding a relationship with schools they had serious interest in. There has been discussion among the Battles about taking advantage of that, but until Day’s visit to Fort Lauderdale, there will be nothing planned. There are bigger priorities for Battle now.

“The state championship is this weekend, Friday at 8:00 p.m.,” Battle said. “No [visit] plans until we talk to Coach Day.”

At the moment, Broeker may be the only realistic offensive line option to join the Ohio State recruiting class, and that made him a very real priority for Day and offensive line coach Greg Studrawa despite this week’s chaos.

“It went really well,” Broeker said of the meeting, which included Day and Studrawa watching the 6-foot-6, 285-pound tackle play basketball. “I had spoken with him when he was the offensive coordinator, but it was great to meet him in person. They said the program will remain the same as it was with Urban Meyer.”

Broeker will make his final recruiting decisions in the next week or so, but first he’ll be taking two key official visits. He’s heading to see his two finalists, but he’s still solidly committed to the Rebels.

“I’m still 100-percent committed to Ole Miss, and I’ll spend Saturday at Ole Miss,” he told Lettermen Row. “Then I’ll leave Sunday for Columbus and get back late Monday.”

As of 4 p.m. on Thursday, here’s where things seem to stand with the Buckeyes and their current crop of 2019 and 2020 commitments.

I’ll update this list again on Friday as I get clarification on some of the unknown situations above.