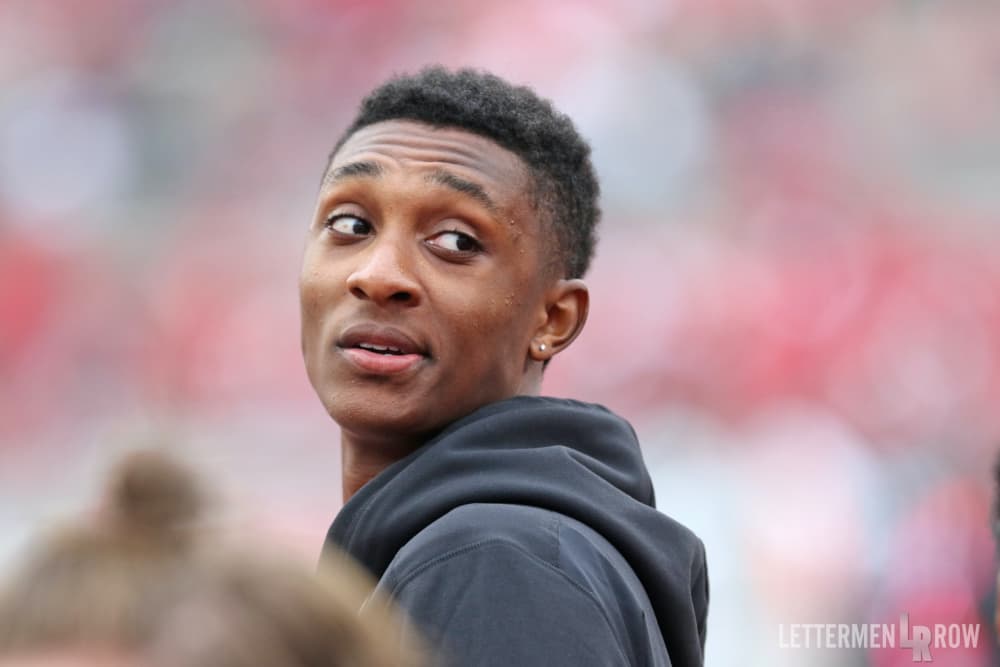 Dwan Mathis is eager to get to Columbus and begin his Ohio State career. (Birm/Lettermen Row)

Stay in touch or be left out because Ohio State recruiting is a 24-hour, seven-day-per-week obsession. What’s the latest news as the Buckeyes build for the future? Get that and more Sunday through Thursday on Lettermen Row, including today’s talk about Dwan Mathis, Jordan Battle and more.

Dwan Mathis ready for his turn at Ohio State

As quarterback Dwayne Haskins continues to set new school quarterback records, Ohio State should feel more and more certain that he will become a one-and-done starter in Columbus.

That means the Buckeyes will likely be relying on Tate Martell, Matthew Baldwin and commit Dwan Mathis to replace Haskins next season. For the 6-foot-4, 200-pound Mathis to make an impact on the Ohio State depth chart next season, he’ll need to get started early for the Buckeyes — and that’s what he intends to do.

“I’m getting everything lined up now [to enroll early],” Mathis told Lettermen Row. “I have to finish two more online classes and then I’ll be cleared. I am trying to come in there and grind.”

That’s good news for Ohio State and for Mathis. The benefits of enrolling early, for those who are capable of doing it, are obvious. It’s six more months of a college weight program, six more months of learning an offense and six more months of gaining insight into how to better manage time, expectations and other realities of college football.

For a quarterback, especially one that could walk into a program without an established starter, it’s the part about learning an offense that is most related to potential playing time. Ohio State runs a similar offense to the one Mathis has worked in at Oak Park (Mich.), so he’s comfortable with the basics of it. He’s seen the Buckeyes offense evolve over the last few months, a change that he’s excited about and one that he was promised would happen. It’s also a change that a lot of detractors told Mathis wouldn’t happen.

“It just proves that [quarterbacks coach Ryan] Day is a man of his word,” Mathis said. “There really was never any doubt in my mind he wouldn’t be. That just confirmed what he was saying was true.

“They’re doing a lot more passing and letting the quarterback make decisions on his own, taking more downfield shots, really.”

Before he steps on campus as a full-fledged signee, Mathis will be back at Ohio State on Nov. 24 for the game against Michigan. He plans on having a handful of his Oak Park teammates, like Maliq Carr, Enzo Jennings and maybe Justin Rogers — all three 2020 prospects have an Ohio State offer — with him.

Jordan Battle and what Ohio State needs to happen

So the long-awaited Jordan Battle to Alabama official visit happened last weekend. To this point, he’s still committed to Ohio State, which is good news for the Buckeyes.

But they are definitely not out of the woods yet.

What happens from here is going to be very interesting. The Buckeyes certainly want to keep Battle in their recruiting class, and to do that, I really think they need to get through this week. If that can happen, it’s reasonable to expect he’ll wait to make any final decisions until after the at-home visit season, which begins at the end of the month. That would give Urban Meyer and Ohio State a chance to visit Battle — since it appears he won’t visit Columbus again this season. And it would give him and his family real insight, straight from the source, about Meyer’s future plans rather than having to hear about it second-hand and from sources that would benefit from instilling seeds of doubt.

There’s a post-visit glow to worry about right now, so stay tuned for these next two or three days.

If you’re looking for a little more insight into what prompted Rockwall, Texas, wide receiver Jaxon Smith-Njigba to commit to Ohio State last week, just hours after returning home from his first visit to Columbus, here’s a video that provides it.

We had a special guest @jaxon_smith1 on The Warmup last week! The @Rockwall_Jacket Wide Receiver committed to @OhioStateFB and will be a Buckeye in 2020! @RISDAthletics @RockwallJackets #ihss #txhsfb #BuckeyeNation pic.twitter.com/mnuvEHDqBX

This kid is a future leader at Ohio State, no doubt about it.

Noah Cain, the 4-star running back from the IMG Academy in Bradenton, Fla. will not visit Ohio State on Nov. 24 after all. We talked about the potential for him to still visit last week, a trip that was still on according to his father as of last Thursday morning, but that will not take place now.

What happened? Well, Marcus Crowley happened, and landing his commitment was enough for the Buckeyes to shut down running back recruiting. They’re very happy with Crowley and Steele Chambers at the position, and Cain will instead focus on Texas, Georgia, LSU and Penn State.