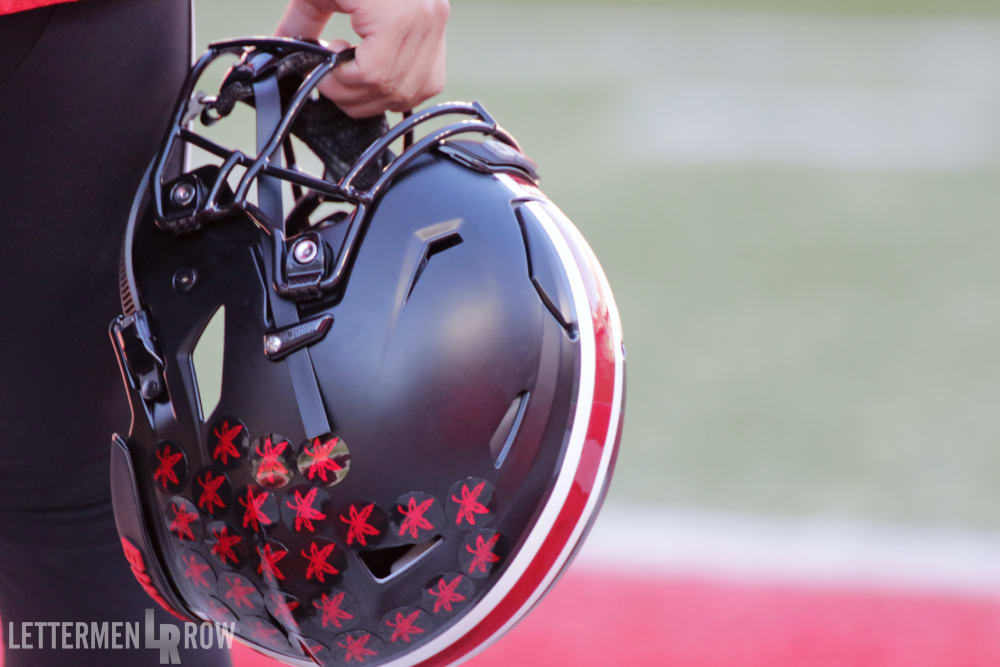 Ohio State is entering the home-stretch of the 2019 recruiting class. (Birm/Lettermen Row)

Stay in touch or be left out because Ohio State recruiting is a 24-hour, seven-day-per-week obsession. What’s the latest news as the Buckeyes build for the future? Get that and more Sunday through Thursday on Lettermen Row, including today’s discussion about Jestin Jacobs, Sam Daugstrup and more.

On Tuesday, we mentioned a new in-state offer that Ohio State extended to Clayton Northmont’s Jestin Jacobs, a 4-star prospect who has been committed to Iowa since May. In that Dotting the ‘Eyes, it was mentioned that an important thing to watch for is a planned visit with the Buckeyes.

“Jacobs will need to set up a visit to the school, a move that will no doubt be met with significant resistance since Iowa has a pretty firm no-visit policy for its commitments. So if a trip is scheduled, it’s a good sign for the Buckeyes.”

Well, on Wednesday, it was reported by Steve Wiltfong of 247Sports that Jacobs in fact has scheduled a visit to Ohio State.

So now things become real here. The Nov. 24 visit isn’t expected, at this point, to be an official visit, which means it’s likely that the Buckeyes will see him on campus again for an official visit in early December.

I know Iowa’s no-visit policy is strict, but we’ll see exactly how strict in the coming weeks. Will the Hawkeyes move on from Jacobs before he visits Ohio State, or will they work overtime to try and prevent him from coming to see the Buckeyes in late November? I think with a player like Jacobs, Kirk Ferentz and crew may take a less hostile approach and back off the no-visit policy in an effort to maintain his pledge.

Though his junior season did not turn out how he would have liked after missing the entire thing because of a torn ACL, Cleveland St. Ignatius 2020 tight end Sam Daugstrup is working hard to stay positive about his recruitment.

“Being honest with you, the injury has been the hardest thing I’ve ever had to deal with,” Daugstrup, the country’s 19th-ranked 2020 tight end, told Lettermen Row. “The thing that keeps me positive is knowing that I’m gonna come back stronger my senior season.”

For most recruits, the junior season is the money season. It’s the year when schools around the country get the best idea of what a player can develop into down the road. Part of that evaluation starts at camp in the summer leading up to it.

And it was actually at camp with the Buckeyes in June when the injury was suffered.

“I actually tore my ACL at that one-day camp in June,” he said. “They seemed to be very interested during my time at camp. I talk most with [Ohio State staff member Tim] Hinton, but during my time at the day camp back in June I spent the whole day working individually with [tight ends] Coach [Kevin] Wilson along with two other tight ends.”

The conversation has continued, which led to a game-day visit last weekend when the Buckeyes hosted Nebraska.

“It was an amazing experience,” he said. “It was great to see all the coaches again and the stadium atmosphere. It was also cool being able to see some St. Ignatius graduates play.”

Toledo, Pitt and Vanderbilt have offered the 6-foot-5, 230-pound Daugstrup. He’s an interesting prospect that bears watching as the Buckeyes continue to open up their 2020 recruiting efforts.

Ohio State has a lot of offers out to 2020 defensive ends, knowing it will be tasked with replacing Jonathon Cooper and likely Chase Young following the 2019 season. One of the young prospects they’ve seen a few times is Port Huron (Mich.) Northern 3-star athlete Braiden McGregor.

Don’t let the 3-star status fool you. McGregor has offers from the Buckeyes as well as Michigan, Michigan State and Notre Dame already, making the 6-foot-5, 250-pound lineman one of the most sought-after prospects in the Midwest in a loaded 2020 group.

“[The Ohio State offer] is a pretty big one,” he said. “I’ve been down there twice, and it’s a pretty cool place. Also, you can see how good they are this year and how many people they put in the NFL.”

He visited Ohio State for the third time last weekend, and he evaluated the overall experience as “really good” before saying how much his relationship with the Buckeyes has changed in recent months.

“It’s been way different from the first time down to now,” he said. “I got to talk with Larry Johnson for about an hour and Urban Meyer for like 15 minutes on Saturday. I think just the campus life and how Buckeyes football is, that’s really caught my eye.”

This weekend McGregor will once again visit Notre Dame. The Irish, along with Michigan, are considered to be at the top of his early list. Ohio State is working itself in there as well.

Speaking of 2020 defensive ends with Ohio State offers, a new name was added to that list on Wednesday night.

God is good!!! Blessed to receive an offer from THE OHIO STATE UNIVERSITY 🌰 pic.twitter.com/YXv1E7xeaB

That is Dallas (Texas) Highland Park 4-star Prince Darboh, a 6-foot-4, 210-pound end ranked as the country’s 12th-best player at the position. Kevin Wilson offered Darboh, who also has offers from Oklahoma, Texas and Alabama among his first eight. He’s excited about the Ohio State offer, but it will not change much about his recruitment yet.

“I’m still going to work hard,” Darboh said. “So it doesn’t change much in my recruitment.”

As with any player from so far away, getting him on campus will be an important task for Ohio State if it wants to be a real player in this race moving forward.