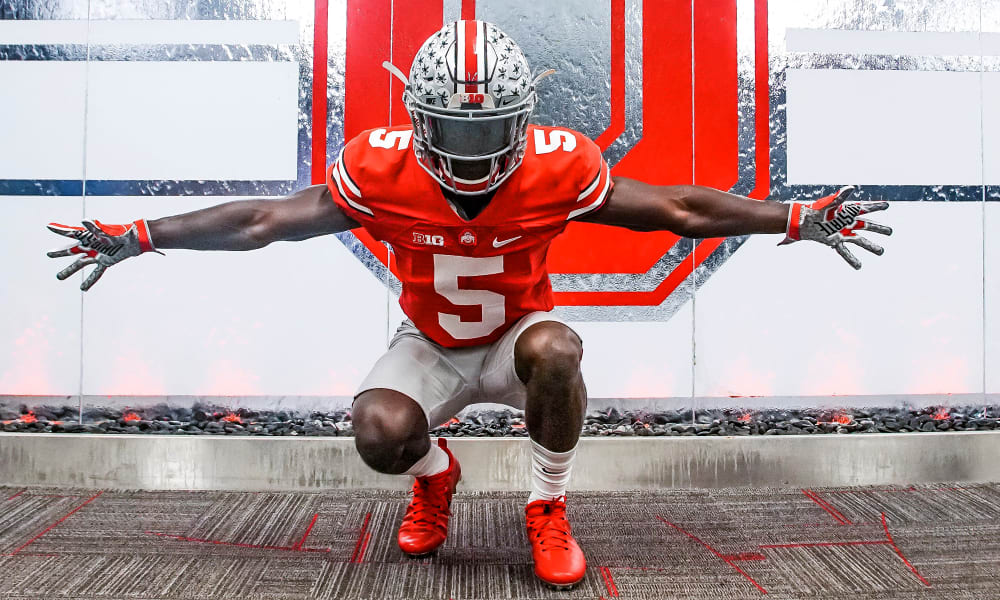 Ohio State will get another shot to win the recruitment of Rakim Jarrett in late November. (Birm/Lettermen Row)

Stay in touch or be left out because Ohio State recruiting is a 24-hour, seven-day-per-week obsession. What’s the latest news as the Buckeyes build for the future? Get that and more Sunday through Thursday on Lettermen Row, including today’s discussion about Jestin Jacobs, J.D. Duplain and Rakim Jarrett.

Ohio State offered Clayton (Ohio) Northmont linebacker Jestin Jacobs last week, and the 4-star prospect who is committed to Iowa quickly set up a visit with the Buckeyes for Nov. 24.

Jacobs, the country’s 18th-ranked outside linebacker, committed to the Hawkeyes in May, a decision based entirely on feeling comfortable with Iowa.

“Iowa felt like the right place for me,” Jacobs said. “I didn’t give much thought to Ohio State at the time of the commitment.”

Now, though, the 6-foot-3, 210-pound Jacobs is certainly thinking about Ohio State. But it’s clear he’s trying hard to keep perspective on what could be a difficult final decision.

“[The offer] was not a huge surprise,” he told Lettermen Row. “They did ask me to come to a camp [over the summer], but being committed I did not go to one. I am hearing from [Ohio State linebackers coach] Bill Davis and [co-offensive coordinator] Kevin Wilson a couple times a week. The offer is exciting to get. It has been a goal of mine, being a kid in Ohio.”

As mentioned, Jacobs will visit Ohio State for The Game. Iowa has a firm no-visit policy for its commitments, but Jacobs has felt no pushback from the Hawkeyes about seeing the Buckeyes. In fact, Iowa’s staff has been supportive of his decision.

“This visit will most likely be an unofficial visit,” he said. “It wasn’t tough making the decision to visit, because when I got the offer I knew I would visit. The Iowa coaches did not encourage me not to, they are understanding of why I wanted to visit.”

Will there be an official visit after this unofficial one?

“I have not thought about an official visit yet,” Jacobs said.

Ohio State not out of the race for J.D. Duplain yet

The Buckeyes offered Strongsville offensive lineman J.D. Duplain early in October, and at this point he’s not made any visit to Ohio State or given any public indication that his commitment to Michigan State is in jeopardy.

Duplain, Ohio’s 35th-ranked prospect in the Class of 2019, visited the Spartans the weekend after receiving his Ohio State offer. And last weekend he was once again in East Lansing, checking out two of the schools vying for his services.

The Buckeyes have tried to maintain a presence with Duplain, and according to a source in Columbus, they’ve not given up pursuing Duplain. The two sides continue to talk and Ohio State is hoping for a visit at the end of this month. That has to happen if there’s any chance for an eventual flip.

There will be a huge recruiting list for the Ohio State and Michigan game on Nov. 24, and one key name has been added as of Sunday.

That is Rakim Jarrett, the country’s sixth-ranked receiver in the Class of 2020 and one of the key targets in that class for Ohio State and receivers coach Brian Hartline. Jarrett’s recruitment was at one time thought to be a slam dunk for the Buckeyes, but in recent months the vibe around him has changed a little bit as other schools have begun to make a push — most notably LSU.

Hartline has been a major influence so far in Jarrett’s recruitment, something he talked about with Lettermen Row following his July visit to the school.

“Hartline is my guy,” Jarrett said. “He was real cool to sit down and talk with. It’s exciting that I’m starting to build a relationship with him. I’m looking forward to further talks to see how he is, but it was a great first impression. He’s been where I want to be.”

A big thing to watch for on this visit? If Jarrett’s mother makes the trip to Columbus with him. She’s a Canton native and has not yet been to Ohio State with her son.

In late September, Lettermen Row talked about New Albany punter Michael O’Shaughnessy and his communication with Ohio State. The Buckeyes had asked that he consider an opportunity to grayshirt with the program and take over the punting role when Drue Chrisman leaves following the 2019 season.

“[The decision] is extremely hard,” he said. “I’ve talked to my parents, and they said that the decision is up to me. I do have to consider the financial side of things, however, and it is very hard to turn down a free education.”

Now, the 6-foot-4, 205-pound O’Shaughnessy is waiting for academic word from Ohio State, and that could determine what happens in his recruitment.

“I applied to the school,” he said. “Depending on if I get in or not will determine my status as a Buckeye. Ohio State is a very tough school to get into, so we will see what happens.”

O’Shaughnessy has been recruited by Taver Johnson, and the contact between them has evolved from just recruiting talk.

“I still talk to the coaches on a regular basis,” he added. “Messages have more or less turned into friendly conversations.”

He may not end up with an Ohio State offer in this cycle, but O’Shaughnessy could very well end up being a member of the 2019 class.