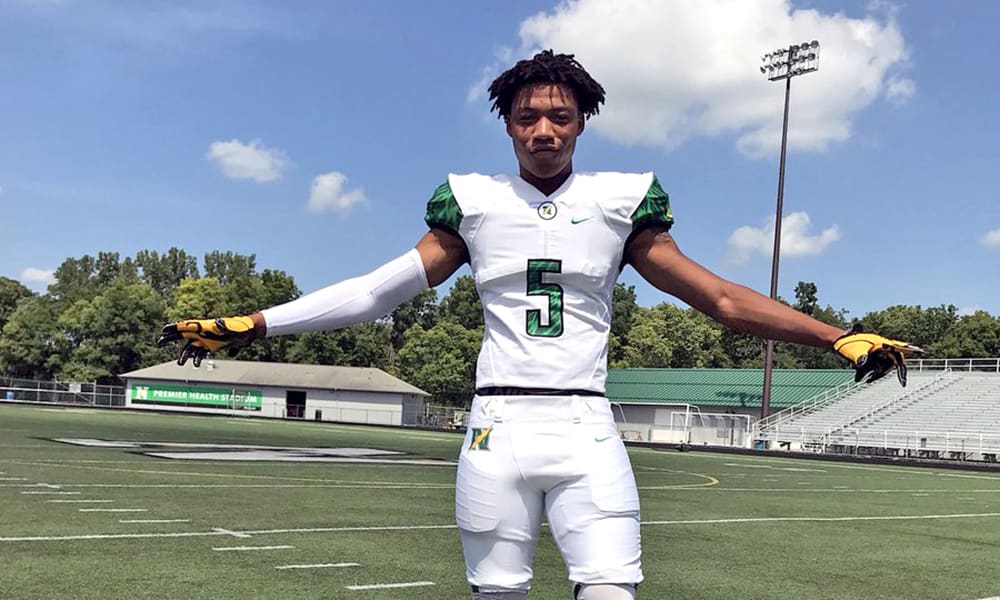 Stay in touch or be left out because Ohio State recruiting is a 24-hour, seven-day-per-week obsession. What’s the latest news as the Buckeyes build for the future? Get that and more Sunday through Thursday on Lettermen Row, including today’s talk about a new offer to Iowa commit Jestin Jacobs.

The Buckeyes have offered another in-state linebacker in the Class of 2019.

Iowa commit Jestin Jacobs is a special athlete at 6-foot-3, 210-pounds from Clayton Northmont, the home of former Ohio State safeties Kurt Coleman and C.J. Barnett. Jacobs is the country’s No. 18-ranked outside linebacker prospect in the Class of 2019 and the No. 12 player in Ohio according to the 247Sports.com composite rankings.

Jacobs committed to Iowa back in May, a decision that no doubt affected how his relationship with the Buckeyes was built. But now he’s got the same opportunity as any other player with an Ohio State offer. The question is whether or not he’ll take it.

Ohio State has been in touch with Jacobs in recent weeks, with Kevin Wilson making a stop at Northmont during the off week. But the offer was extended by linebackers coach Bill Davis. For Ohio State to have any shot here, Jacobs will need to set up a visit to the school, a move that will no doubt be met with significant resistance since Iowa has a pretty firm no-visit policy for its commitments. So if a trip is scheduled, it’s a good sign for the Buckeyes.

Jacobs had planned to enroll early at Iowa, so there’s not likely to be a lot of back and forth here.

Lettermen Row has been told that the offer to Jacobs has zero to do with how Ohio State feels about its pursuit of Cleveland St. Ignatius linebacker Tommy Eichenberg. The Buckeyes absolutely would love to add them both along with Cade Stover at linebacker in the class of 2019.

“We’ve been talking for a little over a month,” Branch told Lettermen Row. “Personally, Ohio State is my dream school.

“This offer means a lot, because I know if I go there and put in the work I need to, they can send me to the NFL. It’s a major thing in my recruitment, because this is a top-5 school in the nation every year in football. If they want me, then that’s going to send a message to other schools saying I’m really the real deal.”

A former Ohio State safety and Urban Meyer are the reasons he’s so high on Ohio State.

“Just looking at all the greats, for example, Vonn Bell, he was a safety that went to Ohio State,” Branch said. “I looked up to him and wanted to attend the exact same school he did. I also love their relationship with LeBron James, he’s the best player in the world and that is amazing. Plus, Urban Meyer is a legend.”

Branch is currently unranked in Georgia, but he’s taking his recruiting seriously. He’s already visited South Carolina, Louisville, Kentucky, Georgia Tech, Cincinnati and Indiana and has plans to visit the Buckeyes for the first time in three weeks.

“I haven’t visited Ohio State yet, the Michigan game will be my first visit there,” he said. “I’m looking forward to seeing everything there, to be honest. I want to get to know the coaching staff and I want see how the fans are and I need to know about the education there, too. I heard it’s top notch.”

That trip ended with Ohio State telling the 6-foot-5, 225-pound Foster that it would “be in touch soon,” as it had been for the previous few weeks leading up to the visit. The coaching staff has kept the promise, but to this point, no offer has been extended to the Ohio Bobcats commitment.

“He said he loved the way I play and carry myself. He also said to keep working hard and he would be in touch next week.”

So the Buckeyes are staying in touch, as they’ve done. Foster is Ohio’s best tight end prospect and a player that I personally believe can play for the Buckeyes. I know a few other much more reliable talent evaluators that agree with that notion. If the Buckeyes want him, they’ll need to make a move soon.

“Other schools have continued to recruit me,” Foster said. “But I will be signing my Letter of Intent on Dec. 19.”

Only Ohio State, to this point, has drawn enough of Foster’s attention to make him consider reneging on his pledge to the Bobcats. The Buckeyes, Foster said, are a “special” situation.

There were a lot of major talents on Ohio State’s campus over the weekend, and so far those visits have yielded a pair of commitments, with the program adding 2019 running back Marcus Crowley and 2020 wide receiver Jaxon Smith-Njigba.

Usually, though, game-day visit weekends are for establishing and furthering mutual interest, which is the situation with a pair of future 5-star prospects, 2020 defensive end Chris Braswell and 2021 cornerback Derrick Davis, Jr.

Braswell is the country’s top-ranked 2020 weakside defensive end, and Davis is an early Top-75 prospect in the Class of 2021. Davis has visited multiple times, and the Buckeyes are considered a major contender in his recruitment. This summer, Davis talked about how much he liked Ohio State following a one-day camp performance in Columbus.

“It’s a good vibe,” he said. “It means a lot to me. It means that they’re really interested in me. I’m not letting it [get to me]. I am just focused on me and trying to get better out here.

“[Ohio State] is a really good school. I like the education, it’s education first. My mom is a teacher, so that’s a big part of it. The football team is real good, the coaching staff and everything. ”

It’s never to early to start impressing the best young players in America.