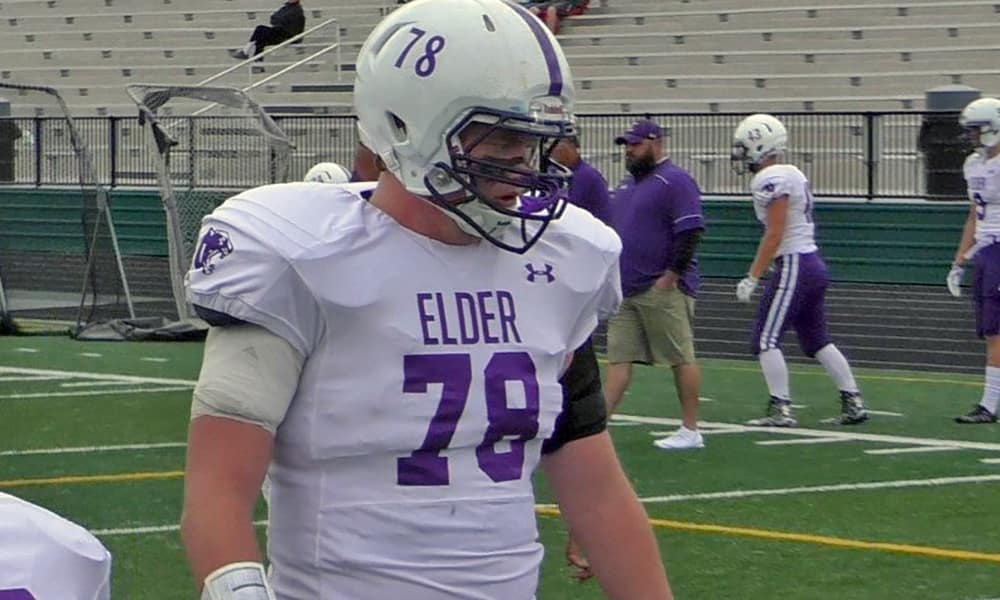 Jakob James is the second in-state 2020 lineman to commit to Ohio State. (Photo via 247Sports)

Ohio State wants to land Ohio’s best football prospects, and the Buckeyes took another step toward achieving that goal when Cincinnati Elder 2020 offensive lineman Jakob James committed to the program.

James was offered early on Monday and wasted no time accepting his place in the rising 2020 recruiting class, becoming the second Cincinnati-area offensive lineman to commit to Ohio State, joining fellow Queen City prospect, 5-star offensive tackle Paris Johnson. James is Ohio’s 17th-ranked prospect in the Class of 2020, and though he plays offensive tackle at Elder, is likely to line up at guard for the Buckeyes.

“It’s an honor and a privilege that I have grown up learning about having family that have both worn the scarlet and gray and are fans as well,” the 6-foot-5, 275-pound James said, tweeting out his commitment.

Ohio State hosted James multiple times for visits and for camps in Columbus, and each time it seemed as though they were closer and closer to extending a scholarship offer, with the most recent visit coming from Ryan Day and Greg Studrawa last week.

“It’s really a dream come true,” James told Lettermen Row. “I just felt like it was the right place for me and it felt like home.”

The addition of James gives the Buckeyes three offensive linemen verballed in the 2020 cycle, a group that is likely to number five or six total by the time next year’s signing period rolls around. He joins the aforementioned Paris Johnson and center prospect Luke Wypler, each of whom has been committed to Ohio State since last summer.

“The next step is becoming part of the legacy and the tradition that is [Ohio State] football and Buckeye nation,” James said. “Something I can’t wait to fulfill and uphold.”

This is a dream come true… Officially Committed!! ⭕️🙌🏻🌰 pic.twitter.com/lZ0GoomTAr

How will the commitment of Jakob James impact Ohio State? Check out more on this 2020 verbal pledge to find out.