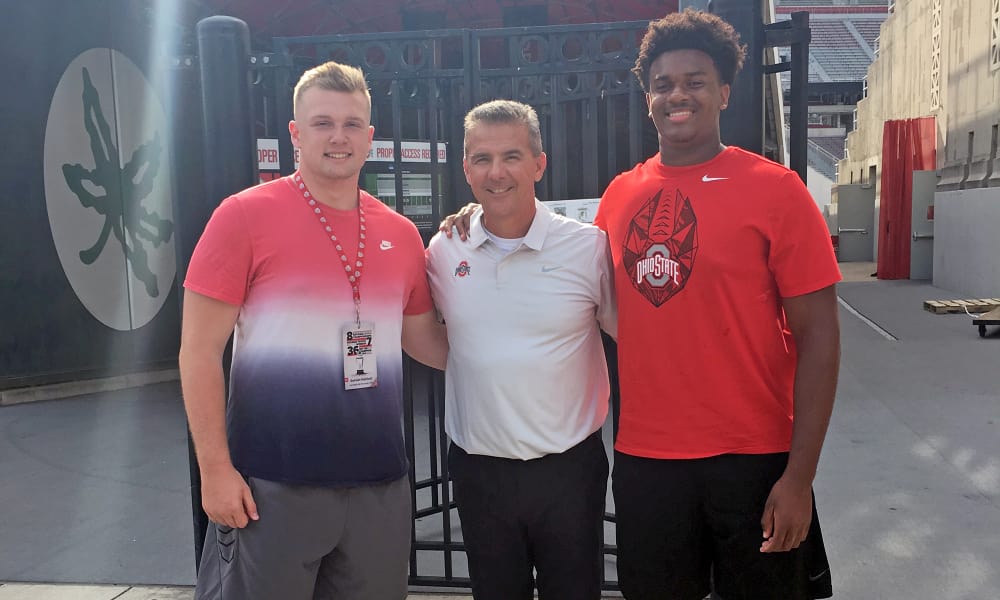 Ohio State hosted one of its top 2019 offensive line targets on Wednesday when Washington (D.C.) standout Walter Rouse paid a visit. On Thursday and Friday morning, the Buckeyes welcomed in one of their top remaining 2020 targets, Ferndale (Wash.) High School’s Geirean Hatchett.

Hatchett, the country’s No. 7-ranked offensive guard, was in Columbus for the second stop on a three-college tour that also included Notre Dame on Wednesday and Michigan later on Friday. Lettermen Row introduced you to him just about 10 days ago as he previewed the visit, his first to Ohio State. Now that the visit is concluded, it’s clear the Buckeyes, offensive line coach Greg Studrawa and Urban Meyer made a big impression on the 6-foot-5, 275-pound lineman.

“We were in campus all day Thursday and then met with coaches this morning,” Hatchett told Lettermen Row on Friday morning. “I had an awesome time at Ohio State. It was really good getting to meet with coaches and tour the facilities.

“It was all very impressive. What stood out the most was being able to sit down and finally meet with Coach Meyer and coach Stud.”

Studrawa has been spearheading the limited interaction with Hatchett preceding the visit, so for Washington’s fourth-ranked 2020 player, the chance to meet him in person was important.

“They were both really awesome coaches,” Hatchett said. “I’ve already talked with coach Stud over the phone, so I kind of had a feel for his personality and our relationship. But getting to sit and talk with coach Meyer for the first time was really cool. Just getting to hear everything he had to say to me was awesome. We definitely built a good relationship with him while I was here.”

That includes his father, who made the cross-country trek with him. Academics are a key part of his college decision and it was necessary to see the plan Ohio State had in place for that piece of his recruitment.

“My dad definitely liked the education part of it,” he said. “For me academics are a big factor in the decision and Ohio State definitely impressed both of us with their academics. That wasn’t super surprising because I have a family friend who went [to Ohio State].

“They always try and recruit me to Ohio State and they always talk about the academics, so it wasn’t a huge shock to me. But it was definitely more impressive than I initially thought.”

Ohio State 5-star 2020 commitment Paris Johnson Jr., also scheduled to be in Columbus on Friday as the Buckeyes host a gaggle of top 2020 prospects, made the trip from Cincinnati a day early just to spend time with Hatchett. The pair first met during a recent June visit to USC. Since then, because the two hit it off quickly, they’ve remained in regular contact. Hatchett said it meant a lot to him to see Johnson going out of his way to spend the day with him.

“It definitely meant a lot to me,” he said. “Paris and I have a good relationship already and this just grew it even more. It also shows me that this is important to him and that he wants me to play at Ohio State with him someday.”

There was no immediate pressuring for Hatchett to join the Buckeyes Class of 2020, but the invitation is there to join at any time.

“Obviously they were saying that I could just end it right here, but it was in a joking tone,” Hatchett said. “There was no pushing hard yet, but I’m sure in the future they will start to push harder. Coach Meyer did express a lot of interest in me and said I for sure have a spot here if I want it.”

The Buckeyes hope he does.

In case you missed it, the Buckeyes added commitment No. 15 when Memphis (Tenn.) Whitehaven tight end Cormontae Hamilton chose Ohio State over Alabama, Ole Miss, Tennessee and Louisville, among others.

Hamilton’s not a guy that is going to set the internet on fire thanks to his star ranking, but he should make up for it thanks to the opinion of college coaches recruiting him. Ohio State has been very high on him since January when Kevin Wilson first made a stop at Whitehaven. We talked with Rodney Saulsberry, the coach at Whitehaven, about Hamilton and he raved about his star pupil, stating unequivocally that he has NFL potential.

What was left out of the story is that Saulsberry is a Michigan graduate who told us that he was definitely rooting for the Wolverines to get involved with Hamilton. The Wolverines had recently started to look into Hamilton, but they were already the favorite for Fairfield (Ohio) 3-star prospect Erick All, who committed to Michigan last month.

“It really was all about timing,” Saulsberry told Lettermen Row. “Kevin Wilson got in much earlier and saw what Cormontae could do. Michigan had begun looking into him, and Al Washington was doing a great job, but it was just too late and then they took a different tight end. It’s all about timing.”

Saulsberry thinks that college football and the NFL will see more and more players at the tight end position with Hamilton’s size and characteristics. Why? Because there aren’t many dudes out there like Rob Gronkowski. There are though, a lot of 6-foot-2, 6-foot-3 super athletes that can do multiple things on the football field.

“If you look at the way the game is evolving, he’s the new prototype for what the game is moving to at that position,” Saulsberry said. “It’s a dynamic change that’s coming to the position, guys like Noah Brown, Evan Engram. There’s not too many Gronks in the world. There are a lot of guys in the realm that Cormontae is in.”

Ohio State on the mind of 2020 running back EJ Smith

The Buckeyes added their sixth 2020 commitment earlier this week when 4-star running back Darvon Hubbard committed to Ohio State on Wednesday night. On Thursday, we talked with 5-star running back Kendall Milton, who said Hubbard’s addition wouldn’t impact his interest in the Buckeyes.

Today, we’re talking to running back EJ Smith, a 4-star tailback from Dallas (Texas) Jesuit High School, and a player that has an offer from the Buckeyes. He admits that Hubbard’s commitment does impact him — at least a little bit.

“A little bit,” the 6-foot, 197-pound Smith told Lettermen Row.”But anywhere I go I’ll still have to compete for a spot.”

Smith has been to Ohio State, having visited Columbus for the spring game in April. And he has tried to stay in contact with running backs coach Tony Alford.

“I think Ohio State is a great school,” he said. “I have been in contact with Coach Alford. I liked the campus and how they prepped their student-athletes for life after football. I like how they put them through the [Real Life Wednesdays] program.”

Right now, the 247Sports.com crystal ball predictions on Smith are both in favor of the Florida Gators. That is the alma mater of his father, a former NFL running back named Emmitt Smith. Though people expect him to follow in the footsteps of his Hall of Fame father, the younger Smith says that’s just conjecture to this point. His dad’s relationship with Urban Meyer, built while Smith would visit Gainesville during Meyer’s tenure at Florida, could help the Buckeyes.

“My dad knew Urban Meyer from Florida,” Smith said. “They have a good relationship with Coach Meyer  because my parents have known him for a while.

“Most people do assume I’m going to Florida, but I don’t know where I’m going to yet. I’m looking for my relationships with coaches and how the education is. More importantly, if the school feels like home then I’ll be leaning towards that school. I’m not close to a decision yet.”