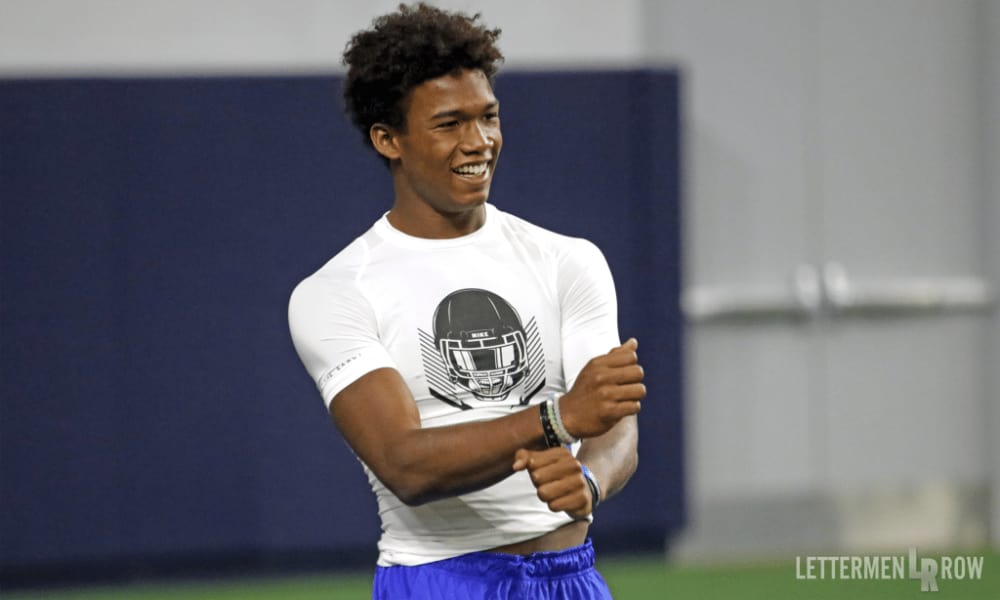 I know we’ve talked about it a little bit already in Tuesday’s Recruiting Question of the Day, but there’s no doubt that Ohio State’s decision to terminate Zach Smith after six seasons as the wide receivers coach will cause some interesting moments on the recruiting trail in the coming weeks.

As Lettermen Row’s Austin Ward reported on Monday night, the expectation from here is that quality control staffer and former Ohio State wideout Brian Hartline will take over the job of wide receivers coach at least in an interim role for this coming season. I expect that if Hartline handles his audition well, he’ll take over the role permanently. He’s an excellent choice for the job, especially after a just-recently-ended NFL career that lasted almost a decade.

Hartline’s appointment isn’t yet official, but he’s already begun reaching out to current Ohio State wide receivers targets. That’s a pretty solid indicator of what’s happening from here. Again, as he’s been on staff already, there’s no real introduction necessary for the majority of players being recruited by Ohio State. But it’s still very necessary to get a temperature check on your top guys.

As I tweeted on Monday, there’s no concern with Ohio State commit Garrett Wilson.

Wilson’s phone has been “blowing up” since the reports about Smith first emerged last week. And though he’s set with his commitment, it was still good to hear from Hartline on Wednesday morning.

“We talked this morning on the phone for the first time,” Wilson told Lettermen Row. “He told me that he can’t wait to work with me and that they’ve been working on simple stuff with the wide receivers like looking the opposite way you break, etc.

“He called it the game within the game. We talked about stuff him and Jarvis Landry did in Miami.”

That’s good insight into what the approach early for Hartline will be. The focus will be on building bonds based around his very recent NFL experience and his reputation as a technician on the field.

The decision to move on from Smith isn’t likely to have much of an impact on any of the program’s top wide receiver targets in 2019 or 2020. There are players out there like Indianapolis native David Bell and Austin (Texas) 4-star Elijah Higgins who may actually now have a better chance of ending up in Columbus, because they didn’t seem to be a priority for Smith but have had other staff members who’ve viewed them as a bit more important.

In the Class of 2020, the impact is going to be even less because to this point Smith hadn’t really narrowed in on many guys yet outside of Chicago’s A.J.  Henning. Henning’s recent surge of interest was spearheaded by Smith, and it may take some time to recover for Ohio State. But there’s plenty of it for Hartline and the rest of the Buckeyes staff to cement that relationship. That started already this morning via phone, as well.

Washington (D.C.) St. John’s College standout Rakim Jarrett, set to visit Ohio State this weekend, had no relationship to speak of with Smith, instead has been recruited primarily by Larry Johnson to this point. They’d spoken just once and there was no immediate connection, so this weekend’s visit is pretty big for Jarrett, Hartline and Urban Meyer.

It sounds cold to say it so bluntly, but the show has to go on in Columbus. The Buckeyes are wasting no time in making sure that is the case.

So, speaking of the Buckeyes and wide receiver recruiting, I’ve put in a crystal ball selection for St. Louis (Mo.) Trinity’s Marcus Washington that forecasts a Missouri pick. He’ll make his college decision on Aug. 7.

Following Washington’s official visit to Ohio State over the weekend of June 22, I wrote that Ohio State fans should be careful to dismiss Missouri as nothing more than an also-ran in this recruitment.

Over the course of the past few weeks, even before the incidents from Zach Smith’s past became public, there was less and less confidence from sources familiar with the recruitment that Washington would leave home. There has been fairly constant smoke that family preferred Washington at Missouri, and according to those same folks close to Ohio State’s side of things, the player himself never came out and said he was 100 percent in with the Buckeyes.

I think the writing has been on the proverbial wall here for weeks that Washington has been leaning toward Missouri despite the belief that Ohio State has been the clear-cut favorite. The recent events with the coaching staff opens a door for both sides to re-evaluate. Because of that, as long as a decision stays on track for Aug. 7, I think Washington will commit to Missouri.

Let’s move away from the wide receivers for a moment and to the defensive tackle position. The Buckeyes offered 2020 lineman Dane Middlebrook from Brownsburg (Ind.) High School on Monday night.

It was the first offer for the 6-foot-1, 310-pound Middlebrook. He visited Ohio State in March and returned to camp with the Buckeyes in mid-June. He was one of the few players pulled out of the large group of recruits that spent time working with Larry Johnson directly. The offer is something truly special for him.

“I feel blessed for this opportunity,” Middlebrook told Lettermen Row. “It opens the gate for anything and everything.”

The currently unranked defensive tackle says he’s not sure why the Buckeyes offered right now, but that doesn’t really matter.

“I don’t have any clue [about the timing],” he said. “It’s just all my hard work and keeping God in my corner and trusting the process.”

Trying to figure out how many cornerbacks Ohio State will take in 2019
Darvon Hubbard commits: 4-star running back picks Ohio State
Advertisement